What’s next for the student movement in 2015? 7 student leaders give their thoughts

The student movement is not in a place that I expected it to be 12 months ago. Thousands have been involved in actions for free education, when not too long ago it was considered quite a radical position. Hundreds have held occupations on their campuses and school and college students are building active anti-cuts groups. Students are moving in to 2015 with huge momentum. This activity is not specifically geared toward the General Election, although I hope it shapes it.

More than just the issue of education funding though, we need to take action on the issues linked to it. The maintenance loans system is not covering the cost of living, the welfare state excludes students and even penalises those not from this country; housing is in crisis and dangerous anti-immigration and ‘radicalisation’ rhetoric is putting many at risk.

We need serious organising for living grants and rent caps and to be unafraid of using tactics that force change rather than ask nicely for it. We need a movement united against fascism and Islamophobia and to wage a real challenge, not only to UKIP and the Home Office, but our own institutions, too.

As we approach the General Election the challenge for the student movement is to get our alternative to tuition fees, education cuts and a lifetime of student debt high on the political agenda.

The 10,000-strong national demonstration for free education has kick started a national debate on a progressive and inclusive education system looks like.

This year Germany scrapped tuition fees, which once again proves that free education is possible. If the government scrapped Trident nuclear weapons, reduced military spending or increased tax on the rich, many billions of pounds would be made available not just to fund free education but all of our vital public services.

We must also step up the fight for affordable housing, an ethical education, which sees our universities run on renewable energy and not dirty fossil fuels, and an inclusive education where all forms of discrimination are tackled. That’s why the Student Assembly Against Austerity will be campaigning for our ‘Student Manifesto’ and asking politicians and political parties to support our alternative to austerity. (http://www.thestudentassembly.org.uk/student-manifesto.html)

We must maintain the momentum that demonstration unleashed to ensure that our demands are impossible to ignore. To achieve this we need a united and active student movement that delivers coordinated national days of action, protests, direct action and more. Let’s continue to build a fighting movement in 2015. 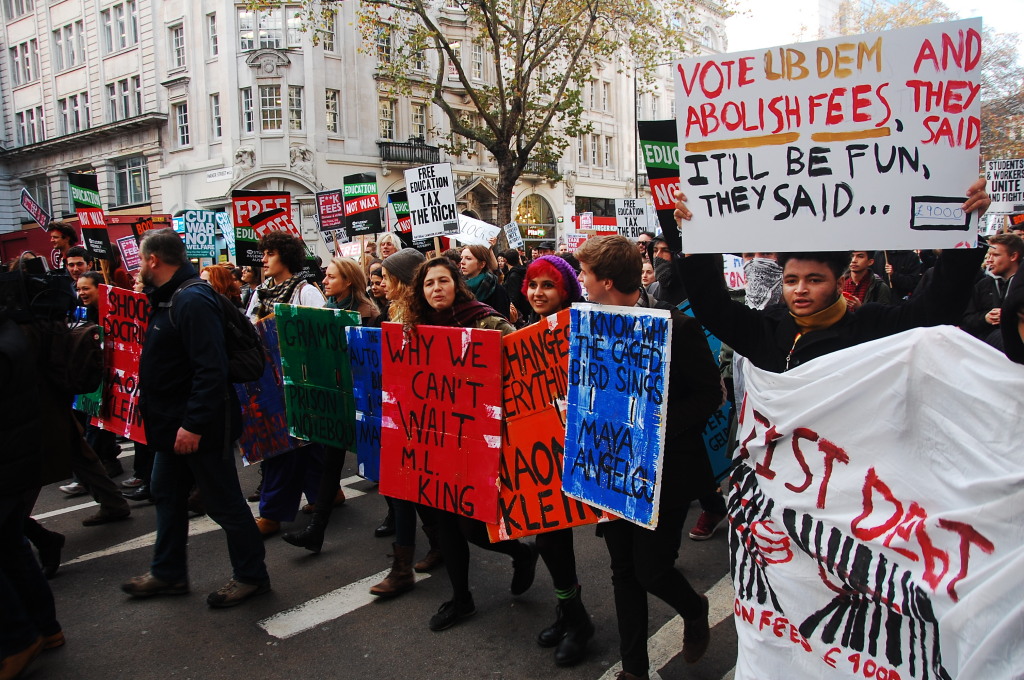 2015 is a big year. The General Election is fast approaching, and politics has been split wide open. YouthSight puts the student vote for the Greens at 24%, but can we keep that place in student politics? For the Young Greens 2015 will be about engaging all of our 7,000+ members and comparing that to last year, when we had roughly 1,300, is going to be a big challenge.

I think for the wider student movement the challenge is to build sustainable campaigns, but that has started to happen in 2014 already; groups around the country have been working together, when often the left was splintered before. The student movement also needs to wake up to the issue of accessibility – often the adversarial nature and use of high-level terminology can alienate students. If the wider student movement can come together in an open-door way, and build long term campaigns, I think 2015 could be a brilliant time to get involved in student politics.

It’s pretty difficult to distil into a few paragraphs the scale of the problems the student movement in the UK faces; fees, cuts, privatisation, threats to students’ unions’ very right to exist, all the threats students face in the rest of their lives – as tenants, as workers, and so on.

But the scale and the breadth of our challenge also reveals clearly exactly what’s going on: the Tories have a coherent ideological vision for society, and just as coherent a plan for the role colleges and universities play in achieving that. They’re not just bumbling idiots; they knew raising fees wouldn’t save money, they knew scrapping EMA would push people into poverty – and all the glossy reports were never going to change that; that’s what we got wrong. There is no neutral, objective ‘best way’. What these people want – bosses, landlords, principals, politicians – whatever party they’re in – is fundamentally and irreconcilably not in our interests: they have their own class and they have their own class interests, and it is naive in the extreme think we can get them to do the opposite of that by just being polite and ‘being at the table’.

The most impressive gains we have since the 1940s were won through militancy and assertiveness, not by compromise and ‘pragmatism’ – but that seems to be the only tactic up the sleeve of most of the bureaucracy of the student movement. If we can’t build a movement that forces the hand of the people we’re fighting, that leaves them no choice, they’ll never stop just doing what they want. To do that we need two things; an ideology of our own- a real vision of what the world should look like and what education is for; and a cold and sober analysis of what it is going to take to get there. 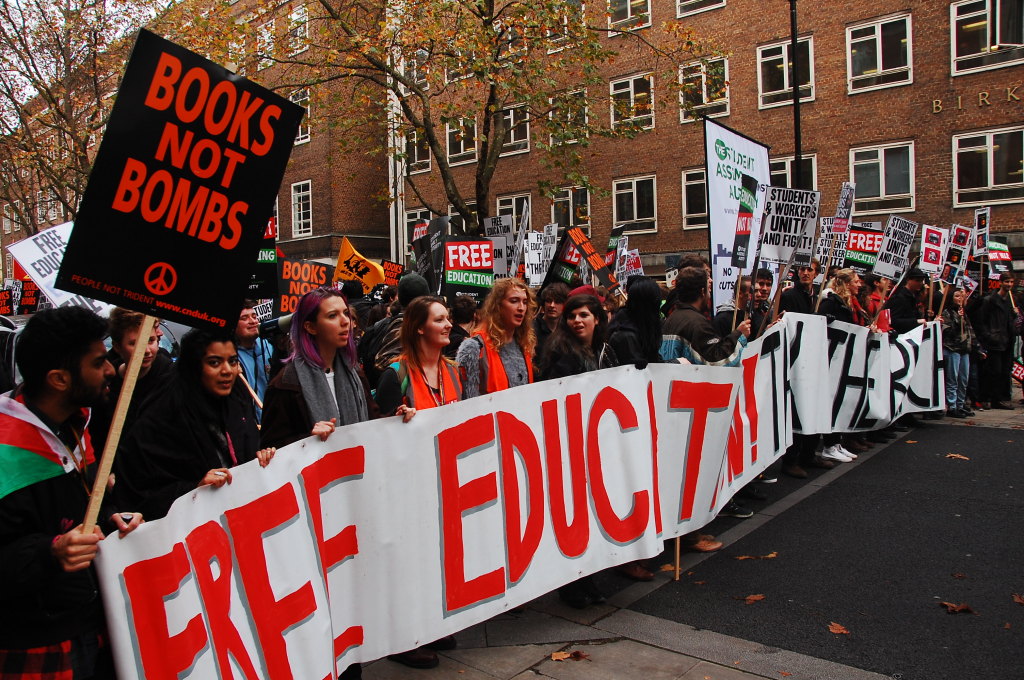 With the general election fast approaching the next 5 months are crucial in getting young people politically engaged and helping them realise that everything comes downs to politics. These young people need to recognise that they are the next generation and they are in the firing line to get the backlash of the government cuts to education, youth service, and healthcare.

It has taken me 10 years and being a mother for me to wake up and smell the coffee and realise that if I am not part of the solution, then I am part of the problem. Instead of being that person that sits at home and moans about how much the cuts and change in policies are affecting me, I should do something about it.

Further education is my passion and has given me the platform to grow, learn and develop with others through inspiring, empowering and motivating them to reach their full potential through using adversity to gain life time qualification.

With the drastic cut backs the government is planning to make in the FE sector it means those in poverty will feel the sharp end of these cuts, instead of giving them the opportunity to break the cycle of deprivation. For this reason it is my upmost priority to campaign to get FE education recognised in society and by government to stop these cuts happening.

The work isn’t completed come May 2015 and the next government is elected, it will only just have begun. And don’t let yourself be left behind as time moves on. We all need to get involved and do our little bit.

Since getting involved in my student union and the student movement I have recognised the amount of different talent we have amongst us. We need to work together using the talents and skills of individuals within the movement to create and implement change. We need to stop focusing on who is right or wrong to prove a political point, it’s about reality and making a difference and change for everyone.

The General Election is high on the radar of most student activists at the moment. The fact that, once every five years, more people are talking about politics again is to be welcomed, but it also presents a challenge.The main political parties are not talking about what I want: a free, liberated education. The Greens’ promise of the abolition of home students’ fees only scratches the surface. We want education which is free for all students at every level; international students should never be an afterthought.Electoralism alone won’t get us what we want, but this election has thrown up a problem called UKIP. Where there is a real danger of them getting seats, we should fight them and fill the clear thirst for radical ideas with left-wing ones. This won’t get us what we want immediately, but it might mean that life doesn’t become markedly worse for anyone who isn’t white and male.The biggest challenge for the student movement will be striking the balance between fighting off the far right and organising positively for what we want. Real political change has almost always come from mass grass-roots organising and spreading ideas out of the campus bubble, so don’t busy yourself with voter registration drives and the like for the sake of it: use your election activity to spread radical ideas that reflect what we really want. 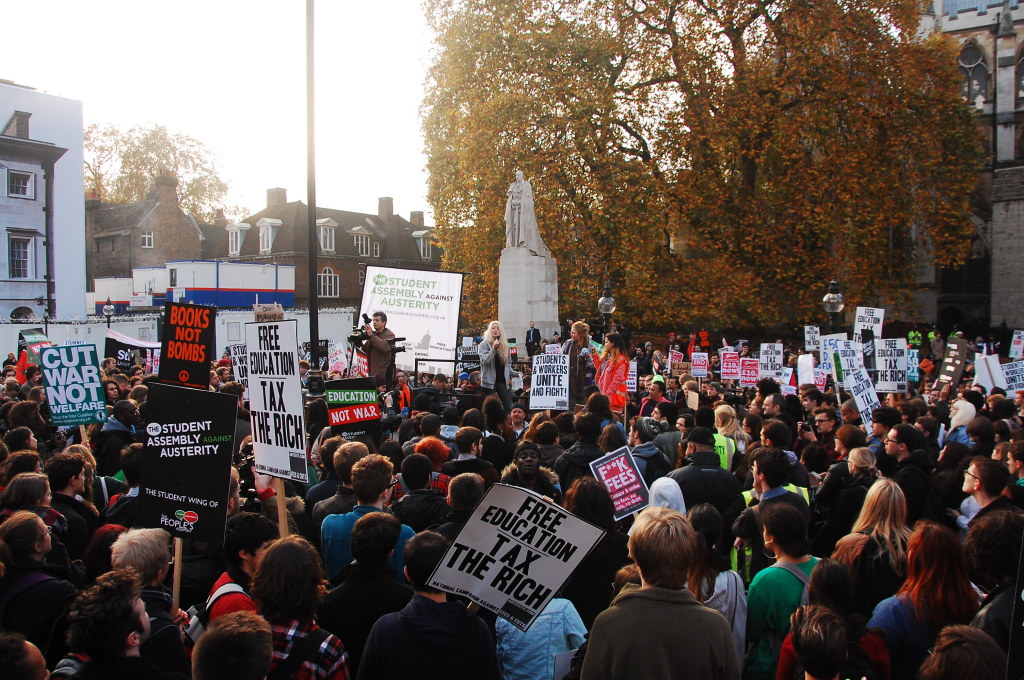 I think the biggest issue facing the student movement in the lead up to the General Election is making students realise the power we hold. So many students and young people feel that their vote won’t make a difference so what’s the point. They feel that their one vote isn’t going to change anything and that all the parties are the same.

But it’s not up to me or NUS to tell students to vote. That’s up to you. If you feel that none of the parties represent you or your views then don’t vote. But do register to vote. Because at least that way the political parties will see an increase of a demographic with the potential to vote, therefore they should tailor their policies to appeal to those who have registered.