Never trust a COP: How the left should respond to COP26

The UK will host COP26, the 26th round of the United Nations Climate Change Conferences, in November 2020. Jeremy Hunt is pleased. Buzzfeed reported that it was his diplomatic intervention which convinced Italy to withdraw their bid. As Foreign Secretary, getting a thing to happen in your country is a pretty big deal. Things happening in your country are especially big when your government has no legislative agenda, desperately needs a distraction and the thing is about climate change – the political issue du jour.

The NGO industrial complex is brimming with excitement too. They’ll be able to do whatever it is they normally do at COP without entertaining the cognitive dissonance born from flying there. Their minds must be overflowing with ideas for a large (but inevitably inconsequential) mobilisation where they can be the centre of attention.

However, we should not be too excited about COP happening in the UK. And we are not just one more large demonstration away from shaming states into delivering climate justice. COP15, hosted in Copenhagen in 2009, was a pivotal moment for the climate movement. There, it reckoned with explicit failure and the fundamental limitations of the COP process. States couldn’t pull off a deal despite a freshly elected President Obama attempting to save the day at the 11th hour.

At COP21, hosted in Paris in 2015, the climate movement’s narrative was clear. It had learned the lessons of COP15 and this was a turning point. No longer would we rely on states. It was down to the people to win and deliver climate justice. Unfortunately, interventions at COP21 by ‘the movement’ were limited and ineffectual. The mass demonstration didn’t know whether it was a celebration or a protest. The Paris Agreement has subsequently been upheld as historic by some despite others highlighting serious flaws regarding its ambition and human rights.

NGOs and liberal environmentalists will celebrate COP26 coming to the UK but offer limited horizons for intervention in the process. They will tell us that its an opportunity to expose the hypocrisy of governments but offer nothing to push them further, let alone replace them.

How should Labour engage with COP26?

The Labour Party is quickly becoming one of the UK’s largest and most powerful environmental social movements. It is a party of 500,000 members with an understanding of climate breakdown as radical as any NGO. It is beginning to roll out a suite of transformational policies marrying economic and climate justice. Jeremy Corbyn’s leadership has fermented radical grassroots organising for a transformative response to climate breakdown through Labour for a Green New Deal.

Barry Gardiner, Labour’s Shadow Minister for International Climate Change, has welcomed COP26 coming to the UK. Labour has a great opportunity to turn the world of international climate negotiations on its head. It would be a grand failure for Labour to engage with COP26 on the conference’s own terms. Under no circumstances should Labour’s leadership step foot inside the conference hall and risk inertia in the hell of neoliberal diplomacy.

Labour should use the global attention on COP26 to push a radical agenda into the mainstream and build international solidarity to deliver a global just transition. It should propose a global Green New Deal with economic transformation at its heart, rejecting the market mechanisms and technocratic tinkering of COP. Central to such a plan should be an internationalism explicitly remaking the global political order. Where developing and colonised countries have been marginalised from the COP process, a global Green New Deal would change the rules of the game to empower those states to lead on the global transition.

A radical response would be to co-convene a parallel conference for socialist parties and movements prepared to take urgent, radical action to accelerate the transformation. Imagine worker, labour and socialist parties from across the globe coming together to develop an alternative plan in the same degree of detail as the Paris Agreement. A global Green New Deal aiming to transform political economies to transition to democratic public ownership of energy and services, smashing inequality, and revitalising stolen or destroyed biodiversity and natures.

It could be led by workers and socialists, but any state interested in addressing the scale of the climate crisis could sign up.

Those countries with socialist governments and parties already in power – Venezuela, Iceland, Cuba, Bolivia, Mexico and Portugal – could join Labour in boycotting the main conference. Those insurgent forces close to power – the socialist wing of the Democrats in the US; Corbyn’s Labour; the Workers’ Party in Brazil; and Jean-Luc Mélenchon’s La France Insoumise – could bring momentum and imminence.  Mass parties with strong bases in the peasant and working class, particularly in the Global South, could bring leadership from those on the sharp end of colonial-capitalist exploitation and climate breakdown.

Such a conference should also strategise winning power by bringing in grassroots organisers as well as party leaders. Without this level of ambition, anything written down on paper will be a footnote of history. Having a plan is one thing, being in a position to implement it is another.

How should social movements engage with COP26?

The NGOs are structurally (and often wilfully) incapable of engaging in the substantive questions of power and the state when it comes to climate breakdown. This is due to restrictive law around charities’ activities as well as ideological hostility to exercising state power. So how do they make themselves useful?

‘The movements’ should quickly learn the lessons of COP21. A large mobilisation just isn’t going to cut it. If the aim is to expose COP and its participants as hypocrites, then the ambition should be to materially disrupt the conference to stop them making progress with their false solutions.

For the ‘apolitical’ elements of the UK’s climate movement more comfortable with direct-action, civil disobedience and ‘shutting it down’, they should disrupt COP26 to the extent that it becomes functionally impossible for states to reach an agreement. This would satisfy the movement’s ambition to expose government hypocrisy and placate the folk political desire for immediate gratification through action. It would also indirectly benefit Labour’s socialist parallel conference by allowing it to make greater progress and reach an agreement where COP couldn’t.

Social movements and NGOs must also reckon with their relationship to ideological politics. Those with roots in anarchism or constrained within liberal institutions will clearly not pivot to Labour and electoralism within 18 months. However, they should re-evaluate their political positions more broadly to complement Labour as the insurgent electoral force with most to say on climate. If alongside their disruptions, the ‘movement’ advances a vision of democratic public ownership beyond party political commitment, then a climate movement unifying around a socialist response to climate breakdown would stand a strong chance making serious headway at COP26. 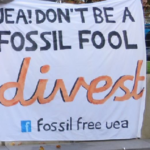 BREAKING: Half of all UK universities have now divested from fossil fuels 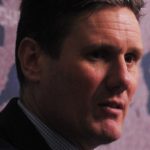 Chris Saltmarsh is a socialist and climate justice organiser based in Oxford. He is Co-Director: Climate Change Campaigns at student activist network People & Planet, where he manages the fossil fuel divestment and fossil free finance campaigns. He is also a member of direct-action network Reclaim the Power and of the Labour Party. He mostly writes about climate politics, social movements and the labour movement.
View all posts by Chris Saltmarsh →