The Green Party needs to overhaul its policy on SEND education

As co-chair of the Young Greens of England and Wales, but even more so as an undergraduate student, I am acutely aware of the issues facing the higher education sector. Whether it’s sky-rocketing tuition fees, attacks on humanities degrees, or the rising bar to accessing higher education in the first place, universities are in crisis, with staff and students alike at the sharp end. The root cause? Neoliberalism: a dogged commitment by successive governments to marketise higher education, putting emphasis on profit, not people, and valuing degree programmes on the basis of the salaries their alumni receive, rather than on the inherent value of learning.

What we talk about much less, however, is how that very same neoliberal destruction of education is not confined to higher education, or even to post-16 education. Its influence throughout our education system is undeniable, and felt no more strongly than by young people with special educational needs and disabilities (SEND) and their families. For the 1.1 million pupils in England with SEND, the education system can feel less like an opportunity to achieve their full potential, and more like a constant battle to be seen as a person, rather than as a price tag. I would know: I was one of them.

Having studied as a blind student in mainstream schools until I was 16, I saw the very real impacts of cuts to local education authorities: retention of specialist support staff was declining rapidly, hours of support both for me, as the student, and for the in-school staff supporting me, were cut at every opportunity, and the level of specialist resources available to me was decreasing, limiting my potential for academic attainment — none of this, it should be understood, being the fault of the individuals delivering what support they could. Then, aged 16, I was faced with a dilemma: to stay in my mainstream school to study for my A-levels without sufficient specialist support and, hopefully, obtain a place at a decent university; or to attend a specialist residential college over 100 miles from home, to complete my A-levels with appropriate levels of support, and to learn the extracurricular skills necessary for me to live independently at university and beyond as a blind person — the type of out-of-classroom support simply beyond the capacity of any existing mainstream option.

I resented having to make this choice. No teenager should be faced with the proposition that in order to receive an education which allows them to meet their potential, in both an academic and holistic sense, they will have to leave their home, family, and existing support networks behind and move halfway across the country for eight weeks at a time.

What I resented even more, though, was having to fight to have my decision respected — and the fact that this fight was solely a matter of cash. Having opted to attend a specialist college, the next step took 18 months, attempting to convince the local education authority that I was a worthy investment — or, more honestly, that I would be a bigger dent in their budget if I stayed in my mainstream school. Never mind what was best for me, where I would be best-placed to achieve my potential given the circumstances, what mattered was how high the price next to my name on their piece of paper was — and crucially, how it could be reduced. With the sheer level of pressure local authorities were under then – and the somehow increased pressure they’re under now – from central government to cut spending to a bare minimum, and then to cut some more, this is far from surprising.

There is some division over the solution to the situation in which I found myself: some say that our aim should be to eradicate specialist schools, like the one I attended, and guarantee that mainstream provision is suitably funded and equipped to include all pupils. Others argue that, sometimes, the holistic provision offered by specialist schools and colleges is simply unachievable in a mainstream placement, and that this provision ought to be safeguarded for those who would benefit from it — I find these arguments more convincing. The driving factor behind my own choice was the inability for my academic potential to be realised in my mainstream school, but there’s no understating the importance and the value of the skills I learnt alongside studying for my A-levels, including cooking, cleaning, and traveling independently.

Focusing our attention on which of these two options is best fails to acknowledge the broader point: that each individual is different, and that their needs will be met in different ways — those options should be open and available to all young people, and their voices should be front and centre in the decision-making process. I have never felt more dehumanised than when sitting in a meeting about my future — a meeting, I should add, which I wasn’t initially invited to attend — arguing that I should be allowed to pursue my ambitions, and each response being one concerned merely with cost.

At Autumn Conference, the Green Party will vote on an enabling motion put forward by the Education Policy Working group, to rewrite the Education chapter of Policies for a sustainable Society. At the moment, our policy is agonisingly vague about specialist schools, bizarrely and inappropriately conflating specialist schools for disabled students with specialist music and dance schools, “ED168 There will be a programme to increase the capacity of all mainstream schools to include disabled children which underpins the UN Convention for Persons with Disabilities. Ultimately some special schools may continue to exist. This will include schools for extremely gifted and talented students, for example specialist music schools, dance schools and sports colleges.”

I hope that this enabling motion, if passed, will set the wheels in motion for an overhaul of our education policy, updating it to address the crisis of neoliberalism facing students of all ages, and putting forward the Green solutions we know can resolve it, creating a vision for education far superior to the marketised dystopia students and staff are fighting back against today.

However, I strongly believe that this cannot be confined to higher education: the catastrophic consequences — for young people, for their families, and for teaching staff working alongside them — are endemic throughout all stages of our education system. Clear parallels can be drawn: the industrial action taken by UCU in recent months in response to real-terms pay cuts and unrealistic workloads mirrors the failure of local authorities, facing ruthless cuts from central government, to retain specialist support staff, as skills leave the public sector for better paid, better supported jobs in the private and charity sectors. Disabled students are being failed by a system which views us as an always-too-high price tag. it’s no surprise to anyone who has experienced that system that the percentage of disabled school-leavers attending university is below that of the general population, and that our degree results, and employment prospects, are consistently lower than that of our peers.

Societal inclusion, in this case contextualised by an acceptance of the social model of disability, is at the heart of Green politics and values. I hope this understanding leads to a policy outcome which puts people, not profits, first, and which prioritises the inherent value of education over any remnants of a model which views our young people as nothing more than an inconvenient additional charge. 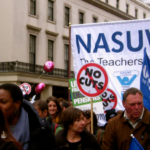