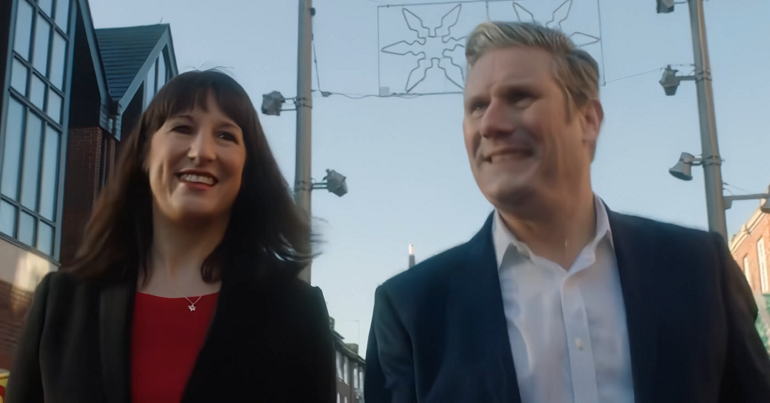 On the show, she was pressed about Labour’s approach to public services. She was asked whether the party would be ditching its previous commitments to bringing energy, water and the railways into public ownership.

Reeves responded by saying, “I’ve set out fiscal rules that say all spending – all day to day spending – will be funded by day to day tax revenues”. Having ignored the question, she was pressed again – being asked, “Is it no or yes to nationalisation?”

Reeves said, “Well, it’s just within our fiscal rules, to be spending billions of pounds on nationalising things – that just doesn’t stack up against our fiscal rules”, adding that taking these services into public ownership were “a commitment in a manifesto that secured our worst result since 1935 […] We have scrapped the 2019 manifesto – that is not the starting point. We’re setting out distinct policies under Keir Starmer.”

Reeves is correct to say that these commitments were found in the Labour Party’s 2019 general election manifesto. However, they have also been made more recently than that.

In Starmer’s bid for the leadership of the Labour Party, one of his now infamous ten pledges was to, “Support common ownership of rail, mail, energy and water; end outsourcing in our NHS, local government and justice system.” Starmer also signed a pledge from campaign group We Own It, committing to bring these services and others into public ownership. And on an episode of Newsnight during the Labour leadership campaign, Starmer confirmed that he would support renationalising water and energy being in a future Labour manifesto.

Opinion polls has consistently shown that bringing public services into public ownership is supported by a significant majority of the British public.

Reeves’ comments have been heavily criticised by the left – both within and outside the Labour Party. A spokesperson for Momentum told Bright Green that Reeves had engaged in “neoliberal dogma”. They said,

Public ownership of rail and utilities is not just vital to tackle the huge climate and cost-of-living crises we face – it’s highly popular too. To ditch this commitment is not smart politics – it’s neoliberal dogma. But Labour members won’t accept this Tory-lite economics lying down – at Conference in September, we will restate the will of the labour movement for full public ownership. As the TUC’s call for nationalisation of energy today demonstrates – this is the common sense position.

Green Party of England and Wales co-leader Adrian Ramsay also criticised Labour’s position. He accused the Labour Party of trying to “gain power at any cost”. He told Bright Green,

It is depressing to see Labour abandoning their traditional support for public ownership of essential services at a time when this is so popular amongst voters. Their attempt to compete with the Tories will see ordinary people and the planet pay the cost as a result.

It’s clear for all to see that the privatisation of essential services like energy, transport and water has served only to line the pockets of shareholders, rather than ensure that these services we all depend on are reliable and affordable.

The Green Party believes it is essential that public services are publicly owned, both in order to guarantee the level of service required to meet society’s needs and help tackle the climate crisis, and to ensure good pay and conditions of those working within them.

The fact that Labour has abandoned these beliefs shows just how far Keir Starmer is prepared to drag the party away from representing the best interests of people and planet in order to gain power at any cost.

Cat Hobbs, Director of We Own It, argued that public ownership of public support have broad support among the public. She highlighted recent polling of voters in the so-called ‘Red Wall’ that found an overwhelming majority of voters back public ownership. She told Bright Green,

Our recent Red Wall polling shows that Labour’s policies of taking energy, water and rail into public ownership are vote winners with huge support. 68% of Red Wall voters support public ownership of rail, 70% water, and 68% energy. Dropping these policies would be a mistake, both morally and strategically. The cost of living crisis has demonstrated, more than ever, that we simply cannot afford to allow private companies to run our key public services for profit. We need to bring our public services into public hands, and we need to do it now.

Since the interview, Labour appear to have backtracked on Reeves’ comments. According to the Independent journalist Jon Stone, a Labour spokesperson has said, “We are pragmatic about public ownership as long as it sits within our fiscal rules –a point Rachel was underlining in the interview by referencing this framework. For example, we know there is a positive role for rail in public ownership”. Sienna Rodgers from The House Magazine has reported that Labour’s position on public ownership of the railways has not, in fact, changed and that a spokesperson told her that Reeves did not hear the element of the question relating to rail.