The Rise of the Green Left – Book Review

Green ideology underpins the world’s most significant rising political movement. Derek Wall’s book “The Rise of the Green Left” is a timely and useful account of the interaction between Greens and the much older canon of socialist thought. This is significant because a coherent Green ideology is only beginning to coalesce. Wall gives us his unique take on what a Green Left ideology would look like in a wide ranging account of struggles around the world. One of the strongest elements of this book is the alignment of the Green Left with indigenous movements in the Global South.

Too often Greens have appeared insular, bourgeois, and open to accusations of Malthusianism and Western cultural imperialism. Wall’s support for indigenous causes and leaders like the great Evo Morales is welcome in this context. It redefines Greens relationship with the global South, and is all the better for it.

There is some reference to the excellent campaigning work that Caroline Lucas has led since becoming the UK ’s first Green MP. But it is unfortunate that the excellent and distinctively Green left campaigns run by the brilliant Sian Berry achieving an unprecedented Green fourth place in the race for London Mayor in 2008 and Adrian Ramsay in Norwich South get less attention. These have grounded Green politics in affordability and supporting local services. And they were incredibly successful, Berry holding the Greens’ two London Assembly seats against a massive Labour-Tory squeeze that left the Greens only one top-up seat behind the Liberal Democrats. Ramsay produced the third highest ever Green first-past-the-post total. Much more of this is needed over the coming years to put Greens at the heart of UK politics.

The challenge that Wall leaves relatively untouched is to define a Green Left strategy that can make a material difference to the lives of those in Europe. Green politics has the potential to capture vast swathes of votes amongst the victims of Neo-Liberalism in the UK today. The coalition Government’s austerity package has removed the velvet glove of consumerism from the iron fist of late capitalism. For the first time the links between social and environmental injustice are becoming clear to people in the UK.

Wall relates effectively the work of Naomi Klein on the Shock Doctrine. This is the process, first seen in Chile after the coup against Salvador Allende in 1973, which uses crises to implement radical neo-liberal reforms that rapidly enrich the powerful while further dispossessing the poor. In the UK this approach has been used to turn a crisis caused by banking failure into an attack on the welfare state.

The recent protests shutting Vodafone shops until they pay the £6bn tax written off by George Osborne have won massive popular support, largely unfamiliar to those of us used to the struggle for human rights and against fossil fuel extraction. It is the task of Greens to take popular anger in the UK at being subjected to the worst excesses of corporate greed and turn this into a popular movement. A popular movement that links the Shock Doctrine for the UK with the Shock Doctrine applied around the world to countries like Haiti.

What is needed is a synthesis of these arguments to produce a radical, progressive Green ideology that delivers social and environmental justice. Unfortunately Wall fails to deliver this. The style is slightly disjointed, and does not benefit from the inclusion of hyperlinks and email addresses in the text. Surely footnotes would have sufficed? More importantly the theory, too, is slightly disjointed. Most of the ingredients of a coherent Green ideology of equality are here, they’re just not drawn together. For example, more attention needs to be paid to the Political Ecology of Andre Gorz. While Wall lauds E.P. Thompson (particularly his work on William Morris) and Raymond Williams, he doesn’t go on to build sufficiently on their legacy as a starting point for Green ideology. It is utterly baffling how no mention is made in the whole book of David Harvey, whose theorisation of a geography of difference should be integral to Green politics in an age of imperialism.

Most critically Wall dismisses far too lightly the vital work of Chantal Mouffe and Ernesto Laclau. Their conceptualisation of ‘prefigurative politics’ – which creates the conditions for social change and develops social movements to come – will be vital in creating a Green ideology with the analytical strength to deliver real, material changes. The Vodafone protests, the No Shock Doctrine for Britain campaign and the anti-cuts campaigning are all great examples of the prefigurative politics we need. Of course, some other movements will be indigenous, and a recognition of the importance of indigenous struggles is welcome. As is a stronger Green engagement with Trade Unions and the other apparatus of civil society through which workers can be organised.

The book that synthesises a Green ideology of the left is crying out to be written, and it’s welcome that Derek Wall has made such a sustained attempt to do so. But this isn’t it. We must go further and create the inspiring texts, the foundational arguments and the enduring truths that bring together core Green beliefs and challenge neo-liberal hegemony.

A version of this review first appeared in Red Pepper 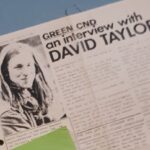 « What we’re arguing against – and what we’re fighting for
“When injustice becomes legal, resistance becomes duty.” »