Last Saturday saw Belfast’s annual Pride parade take to the streets. It’s a celebration that will be familiar to many cities across the world. It’s a lively day with an important message. I’ve always thought Amnesty International put it best with the slogan ‘Love Is A Human Right.’

I particularly enjoy the parade because many years ago, back when I was still developing a political consciousness, I happened across the parade in Belfast one year. I probably would have just walked by and not thought too much of it, but there was a gigantic truck billboard at the head of the route with biblical quotes and a very unsubtle depiction of a ‘traditional’ family unit with a big green tick, and a picture of two (very well dressed) men about to kiss adorned with a large red X. Fundamentalist Christians gathered holding biblical quotes on placards, condemning the parade as a promiscuous, obscene celebration of sodomy.

Appalled, I joined the parade and have marched almost every year since. Their bigotry led me, a heterosexual, to become militantly pro-LGBT.

You might interpret that as a sign that things are moving on – that we are becoming more accepting as a society. And on the face of it, there’s probably some small truth in that. But there’s also truth in the fact that Northern Ireland is still the worst region in the UK by some distance to be gay.

The Pride parade is still picketed by Christian groups ever year. My place of work, Queen’s Students’ Union, received complaints about the flying of the rainbow flag from the building, and a hysterical opinion piece about the Union’s ‘Anti-Christian bias’ in the student newspaper (included for balance / humour, you decide). The biggest party in the country, the DUP, has never taken part in a public debate about LGBT issues, and indeed actively avoids them, feebly claiming that among 8 MPs, 4 peers, 38 MLAs, 175 local councillors and countless staff, a representative could not be found to attend a debate – in the middle of a parliamentary recess. Homophobic hate crime is vastly underreported. And, worst of all, Seventy percent of teenage suicides here are by LGBT people. Are these all linked? Absolutely.

Why? People often conclude (probably with some degree of accuracy) that sectarian hate easily lends itself to other kinds of hate – homophobia, racism, islamophobia. And we’ve got that in buckets, definitely. It seems logical that if you’re going to be narrow-minded enough to hate someone for their religious and cultural upbringing, then you’re probably going to create similar predispositions towards those of a differing sexuality.

The deadly interlinking of right-wing politics and fundamentalist Christianity doesn’t help much either. The former DUP leader, Ian Paisley, famously campaigned in the 1980s under the banner ‘Save Ulster From Sodomy’ – the DUP’s attitude hasn’t changed much since then. Indeed they seem pathologically obsessed with homosexuality. MLA Paul Berry was forced out of the DUP when it emerged he visited a gay masseur. Iris Robinson’s comments a few years back about ‘curing’ gay people and homosexuality being akin to child abuse caused a national stir. Jim Wells, tipped to take over as Health Minister in two years, believes that those who participate in gay pride are ‘repugnant.’ And that’s just the highlights. There are many who believe that two loudly anti-LGBT MLAs may be hiding behind super injunctions about their sexuality – but for now, that’s largely baseless.

The foul tongue of ‘deviants,’ ‘perverts,’ ‘sodomites,’ – things I still hear people say regularly. Some try to equate homosexuality with paedophilia, tying in their sectarian hate of the Catholic church. Protesters attempt to use the Parades Commission, the public body set up to regulate Orange marches, republican parades, etc, to limit the actions of a celebration of the right to love whoever you want. Ultra-right-wing zealots self-appoint themselves as representatives of the opinions of all Christians in the province, despite the presence of progressive Christian groups – including those many Christians who marched at the Pride parade last week.

Just refresh in your mind yet again that this isn’t an issue just for gay people. This is an issue for everyone – it’s about the fact that homophobic abuse is still acceptable, that LGBT people suffer due to societal pressures, that the biggest political party in the country holds the gay community in literal contempt. The press didn’t even ask Peter Robinson for his view on Wells’ comments. Why? We accept it – almost expect it – off the DUP. We’re not shocked by it anymore. Because even if the vast majority disagree, many of us view attitudes like this to be harmless – the same way tabloid journalism is sometimes viewed. But in reality, there is much harm in these attitudes.

This isn’t a sterile political position that people just have differing opinions on. These are people’s lives. Don’t let anyone tell you this is about anything less than fighting for the fundamental basic freedom of being able to live a life without being hated for who you are attracted to. Not enough straight people here loudly champion our gay community. We must oppose this kind of bigotry at every turn – we must all become militantly and loudly pro-LGBT, rather than passively pro-LGBT.

And if you’re from other parts of the UK – well, I hope you take heart from the fact you’re a little ahead of us. 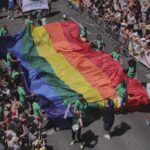 Why we’re campaigning to kick fossil fuels out of Pride