Scotland: Total ban on fracking and unconventional gas in sight

After a flurry of announcements and counter-announcements this week the campaign to ban toxic and risky forms of gas drilling in Scotland may be almost won.

The SNP have just announced their support for an amendment in Westminster to have a moratorium on all forms of on-shore unconventional gas extraction.

Earlier this morning Scottish Labour announced they would ban fracking with existing powers in Scotland if they controlled the Scottish Parliament after the 2016 elections.

The speed with which the parties have upped their game following each other’s moves shows how anger over fracking plans is close to the surface in Scotland.  Hundreds rallied against fracking December and are returning for another rally at Grangemouth refinery tomorrow.  A much larger march is planned in just over a month.

Although today’s new policy positions fall short of a total ban, they remain a huge victory for Scotland’s broad alliance against unconventional gas who are fighting a wide ranging campaign against the Scottish and UK governments, local authorities, and fossil fuel companies.

Mary Church, Friends of the Earth Scotland, said the sudden policy changes “are a direct response to the passionate and informed opposition from community groups and concerned citizens.”

Two years ago Bright Green discussed the opportunity at the hands of the local community in Airth, Falkirk, who are fighting drilling applications for coal bed methane drilling (without fracking) by iGas (1). The Concerned Communities of Falkirk raised thousands to fight a public inquiry in early 2014, the outcome of which has been delayed repeatedly.

Plans for drilling in Airth, along with the right to drill for gas in huge swathes of Scotland’s central belt, remain up in the air until all these toxic forms of unconventional gas – coal bed methane, shale gas, and underground coal gasification – are banned, along with risky drilling technologies like fracking.

What is needed now is for Labour to step up their position on fracking for the rest of the UK, and for the SNP to ban unconventional gas in Scotland using their existing planning powers in the Scottish Parliament.

Up and coming anti-fossil fuel events in Scotland:

(1) Drilling concessions and operations at Airth are now owned by iGas since their 2014 take-over of Dart Energy. 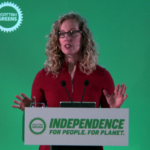