UPDATE: About half an hour after this article was published and tweeted at them, Huffington Post took the article down!

You might have spotted it today: a Huffington Post article headlined “Green Party Advertise Job For Less Than Living Wage… Despite It Being Key Policy Commitment.”

It would be detrimental if true. Nay, a resigning matter.

The only problem is, well… it’s not.

According to the piece:

This works out to around £17,890 a year when the employee works 37.6 hours a week – the national average according to the Office of National Statistics, which says the average London salary is £35,238.

But the Living Wage isn’t based off the ‘average’ London salary. It’s based off what is needed to have an OK quality of life in the capital: £9.15 per hour. 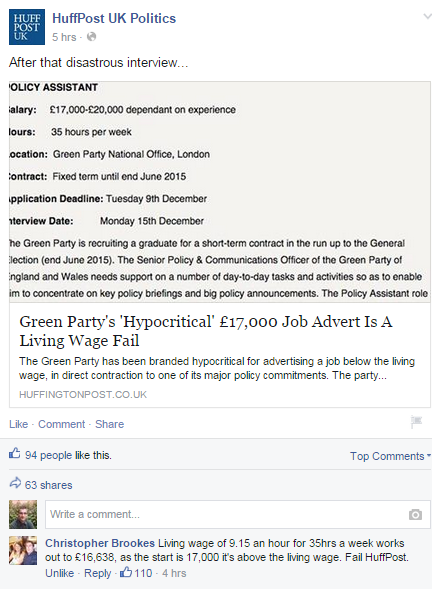 So, the story is completely moot. Why then is it still online? Particularly when the top comment on their Facebook post about it titled ‘After that disastrous interview…’ points out the fatal flaw.

The smear clearly comes from a Labour party attack, clearly sent directly to HuffPo, with a nicely xenophobic quote from a Labour spokesperson:

Labour MP and shadow Shadow Minister of State for Foreign and Commonwealth Affairs John Spellar told The Times: “No one will be surprised that yet again the Green party are caught out in hypocrisy. Our Australian Labour colleagues have experienced this. Maybe [Australian-born party leader] Natalie Bennett has brought the dishonest Green tactics across from Australia.”

The story was also published on LabourList and the Times, but both have since taken the story down and apologised. Contributors on social media have suggested the Green Party of England and Wales could sue over the story.

So, will Huffington Post take the non-article down? We’ll have to wait and see.  Send in any false anti-Green smears you spot and we’ll keep it up.