One thing has been clear over the past couple of weeks – the polls have shifted in Labour’s favour. Miliband’s ratings are going up after the leader’s debate and pledges on tax dodging, and the party are gaining in support, edging open a one or two point lead.

With this, the chances of the Greens getting into power as part of a deal have grown too.

So much so that Populus has given the party a 21% chance of being in government in some form after May 7th – ahead of the Tories’ 18%.

The finding is part of Populus’ ‘Predictor’, described as ‘a proprietary computer model which analyses polling and other data to assign probabilities to different scenarios after the forthcoming general election’, reported by the Financial Times as part of their election coverage (£). It’s more interesting than it sounds, because it looks at the likelihood of different coalition prospects.

The regular study finds that ‘Labour are now the largest party in 58% of the simulations and Ed Miliband becomes prime minister on more than four occasions in every five.’

Basically, Labour will definitely be in government. But most likely as part of a deal with other progressive parties, including the Greens. 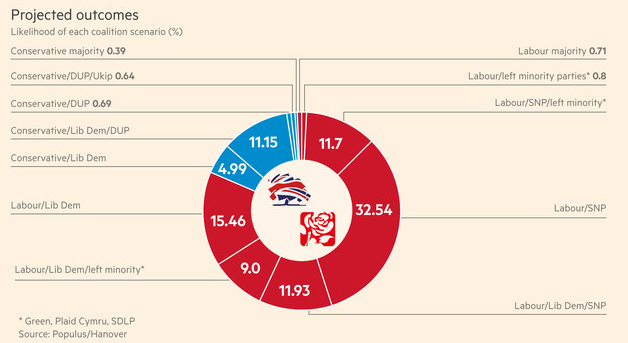 What do you think? Do you think our MP/s in May (touch wood) could form part of a Labour government?