Yes, an electoral pact would benefit Labour and the Greens 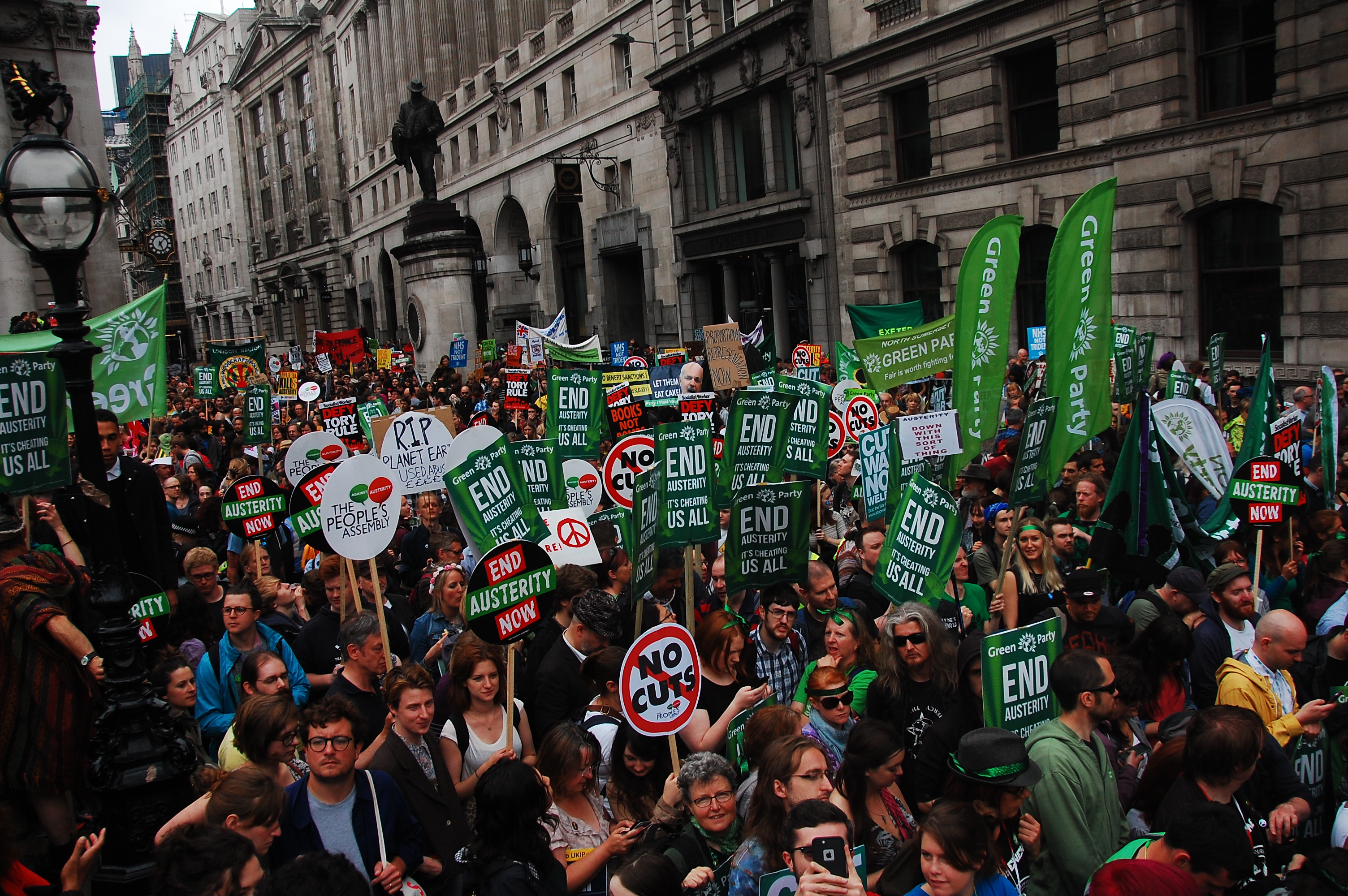 Once again, talk of a Green-Labour electoral pact has come back into the public eye, thanks to Labour leader Jeremy Corbyn daring to not express outright hatred for Caroline Lucas, a position taken as suggesting a possible pact. Regardless of Corbyn’s actual intentions, the news item has gotten people discussing the possibility of a pact once again. As I suspected would happen, when I first wrote a piece on this issue earlier this year, there’s been a sceptical and sometimes angry reaction from some elements within the Green Party. One member, in particular, outlined their position in a Bright Green article, saying that “there are no guarantees, no accurate statistics, that suggest ‘Lefty’ electoral pacts will win seats”. I’d like to respond to anti-pact sentiments, and to that article in particular.

The first thing that needs to be said is that there are plenty of statistics that showcase the affinity between Green voters and Labour voters. In the 2012 London Mayoral election, for example, a full 47% of Green voters gave their second preference to Labour – more than they gave to all other parties combined. (46,241 to Labour, 45,998 to others, 6,674 to no-one). The British Election Study, meanwhile, shows that around two-thirds of Green voters would pick Labour as their second preference. Not only that, but when YouGov examined its Labour leadership polling samples, it found that an estimated 40,000 of those who voted in the election had voted for the Green Party in May 2015 – and of those 40,000, 92% of them voted for Jeremy Corbyn. It’s very easy to pour scorn on the idea that the vast majority of Green voters will turn naturally towards Labour in the absence of a Green candidate, and without a doubt there’s ex-Tories and Liberals in the Green ranks, but the data and evidence so far shows that Green voters share a very strong link with the Labour Party. Certainly enough Green voters share an affinity with Labour to make a difference.

On the flip side, a sizeable number of Labour voters share an affinity with the Green Party. In London in 2012, Labour voters handed an impressive 204,861 second preferences to the Green candidate – meaning 23% of Labour voters voted “Ken then Jen”. This figure is backed up by an Ashcroft poll of national second preferences, which suggest that 20% of Labour voters would give their second preference vote to the Greens under a preferential voting system. It is also supported by an Aschcroft poll of Brighton Pavillion which showed that, of the 38% of voters whose national preference was Labour, a full 21% actually voted for Caroline Lucas, the Green candidate, as their local MP, which helped swing the result from a 36%-30% split in favour of Labour to a 38%-28% split in favour of the Greens. And it’s again backed up by the British Election Study, whose data shows that roughly 30-35% of Labour voters would pick the Greens as their second choice – indeed they are the most popular second choice for Labour voters. Which, given that Labour is a large coalition of diverse forces (unlike the Greens) is a very sizeable and respectable figure.

The second thing I’d like to respond to is the idea that standing aside for Labour would “reduce plurality” and reduce voter choice. I don’t agree. To prioritise a constitutional principle like “voter choice” at the expense of removing the Conservatives from power is a strange way to respond to the situation we find ourselves in. Yes, it would be a compromise – though not exactly a gigantic one, considering they’d still be separate parties – but liberal democracy is characterised by compromise, and competing in it requires an understanding of this. Parties are in themselves an attempt to coalesce wildly different forces and jam them together into a single cohesive unit. It’s undeniable that limiting the number of candidates means fewer people can vote Green. But the question is, are Green political goals – and electoral representation – always best advanced simply by standing everywhere and hoping for a few thousand votes in each constituency? I would argue no.

The third thing I’d like to refute is the idea, suggested in the Bright Green article, that Brighton Pavillion (and other target seats) might be won by the Tories if Labour stands aside. I haven’t really been presented with any evidence to back this up other than an assumption that this might happen; but I have, in contrast, seen evidence to the contrary. I would add, before I go on, that while polls have been wrong in the past, no more so than in May 2015, it often goes unstated that those who predicted the polls would be wrong in May – like Matt Singh of Number Cruncher Politics – used data and statistics to make the point.

When it comes to the argument that the Tories would win in the absence of Labour, my data shows that could happen but only in the unusual case of Norwich South. In that constituency, the Greens won just 13.4% (down 1% from 2010) back in May, which means that they’d need an enormous chunk of Labour votes to increase their vote to a winning percentage. Unfortunately, the British Election Study suggests that while around 36% of Labour voters would flow to the Greens, 30% would vote for the Conservatives. The Lib Dems would get around 22%, and UKIP 12%. Thus, in Norwich South, if Labour stood aside, the result would be 35% for the Tories, 28% for the Greens, 22% for the Liberal Democrats and 14% for UKIP. I would argue that it is Norwich South, not Brighton Pavillion, that would be vulnerable to a Conservative win, although the peculiarities of Norwich’s political scene (the Council’s composition is 22 Labour, 14 Green, 3 Lib Dems and 0 Tories) would likely make the result a lot closer than that. Nonetheless, if we’re considering possible Green seats, Norwich South is certainly a more risky bet.

But such a situation would not happen in Brighton. Using exactly the same second preference data, the result in Brighton if Labour stood aside would be to give Caroline Lucas a landslide 52% of the vote, compared to 31% for the Tories, 9% for the Lib Dems and 8% for UKIP. The situation would also not happen in Bristol West, where the preference data suggests that a Labourless election would produce a result of 40% for the Greens, 27% for the Lib Dems, 26% for the Tories and 7% for UKIP. Sheffield Central, where the Greens came second in 2015, would also be won by the Greens (with 36% to the Tories’ 27%) if Labour stood aside. So the idea that Labour standing aside would harm the Green Party isn’t borne out by the data, in my view.

So, it seems from the data that a pact would benefit the Greens, but would it benefit Labour? Arguably, yes.

According to the British Election Study, around 66% of Green voters would pick Labour as their second preference, compared to 16% for the Lib Dems, 15% for the Tories and 3% for UKIP. Based on this, if the Greens were to pull out in the 10 constituencies in which the Green vote was higher than the Tory majority over Labour (Gower, Derby North, Croydon Central, Bury North, Morley & Outwood, Plymouth Sutton & Devonport, Brighton Kemptown, Telford, Weaver Vale and Bedford), then Labour would win 7 out of those 10 by narrow margins. The Tory margin of victory would be below 1% in the remaining 3. In Gower, for example, the Greens standing aside would transform a Tory majority of 27 votes into a Labour majority of 546; in Plymouth Sutton & Devonport, the Greens withdrawing would see Labour increase its vote from 37% to 41%, turning a Tory majority of 523 into a Labour majority of 1,209. These 7 gains alone would deprive the Tories of their majority.

There are many questions surrounding an electoral pact: how to determine which seats to pick (I did some work on this in another article), how to deal with incumbent MPs, upcoming boundary changes, internal party opposition in both parties. And it’s an unlikely event, which is why it surprises me that people continue to talk about it. But I do not believe that it would harm either party, and the data arguably shows that it would help both. There is a mutual affinity between the two parties’ voters, and polls and actual votes show this in practice.

The British Lib-Lab electoral pact of the 1900s helped the Liberal Party win 3 elections in a row and allowed Labour to build up its Parliamentary presence from 1 in 1900 to 42 in 1910; the pact between the French Socialists and Greens resulted in the election of 17 Green MPs in 2012, up from 4 in 2007; and, in a further afield example, the Canadian election of 1926 saw progressive parties team up to defeat the Tories, thus ejecting them from power despite the Conservatives winning the national popular vote. Could a Green-Labour pact help ensure a Labour-led government and allow the Greens greater Parliamentary representation? It’s difficult to know for certain. But one thing is for certain: we can’t let the Tories win again in 2020. If a pact can even slightly decrease the chances of that happening, then it’s the least the Green Party could do.

« A Labour/Green electoral pact would do more harm than good
#LGBTIQLovebomb: why Greens must prioritise LGBTIQ issues »