Next up in our previews is North West.

The 2018 local elections had many tales of Green success. Lambeth, Richmond and Sheffield all stood tall as fantastic results for the party. When all the votes had been counted, one of the best moments was the election of two Green councillors in Trafford. Both seats the Greens gained were won from the Tories. Their victory helped contributed to the Tories losing their majority on the council.

In achieving this, the Green vote share increased by more than 20 percentage points in the ward where they won the two seats. In 2019, the third of those seats is up for election, with the Greens hoping to make it a full house. Doing so – and assuming the Liberal Democrats don’t also make gains – would make the Greens the third largest group on the council, potentially holding the balance of power between the Labour and Tory groups. It would also enable the Greens to start focusing on other areas covered by the council. Currently the Green vote is exceptionally low outside of Altrincham ward. But securing that ward would free up volunteers and capacity to spread the Green message elsewhere. In the coming years, Trafford will be one to keep an eye on.

Labour monopoly under threat in Knowsley

Trafford wasn’t alone in the North West for providing positive Green results last year. In fact over in Merseyside, the elections in Knowsley were perhaps more remarkable.

Knowsley is completely dominated by the Labour Party. Labour hold 40 of the 45 seats on the council. Three seats are held by the Liberal Democrats, one by an independent, and one by the Greens. So omnipresent are Labour that in many wards they have just one other party standing against them last year.

The Greens’ seat was won in 2018 in sensational fashion. Kai Taylor received 65% of the vote in Prescot South ward and broke the Greens onto the council. The last time the seats were up for election, in 2016, the Greens didn’t even stand a candidate. To go from standing start to stealing a seat from Labour was impressive to say the least.

Now the Greens will be looking to build on that. A second seat in the ward is up for election this year, with the Greens likely to take it from Labour. In two other wards, the Greens picked up more than 20% of the vote in 2018. While a long shot this year, building up the vote share in these areas will provide fertile ground for the future. In the long run, that means replacing the Liberal Democrats as the main opposition in the council.

The heart of the Green North West

Our final preview takes us away from areas offering fresh new promise for Greens in local government, and to a place where the party has been strong for some time. The Lancashire county town of Lancaster elected nine greens in the last local elections held there. That was in 2015, as Lancaster holds ‘all-out’ elections once ever four years. That year, the Greens added one councillor to their number, in what was an already strong councillor group.

Since then, the party’s fortunes have been less favourable. One of the Green councillors elected in 2015 – Andrew Kay – left the party and is now sitting as a Labour member. In 2018, a by-election in the Green held University and Scotforth Rural ward was won by the Labour Party, reducing the Green councillor tally down to seven.

Despite these set backs, the Green presence here remains strong. The party will be hopeful to regain the seat lost to the defecting Kay. In 2015, the Green polled within winning distance in two wards: Halton-with-Aughton, John O’Gaunt. In the former, a by-election was held in 2017 in which the Green candidate fell a cruel two votes behind the winning Labour Party.

In Scotforth West ward, Greens won one of the three seats up for election in 2015 – narrowly missing out on taking a second by fewer than 40 votes. The party could also win back a seat in University and Scotforth Rural ward, perhaps even taking more than one of the three up for grabs.

Many of these races are unpredictable, with some being too close to call in normal political times. In the shadow of Brexit, European elections and the crises in both the Labour and Conservative parties, these aren’t normal times. Given that, it’s quite possible Lancaster will throw up a few unexpected results. This could mean that after polling day the Greens are cheering their strongest result in Lancaster yet, or else it could mean the Green wave in Lancaster could be in retreat. 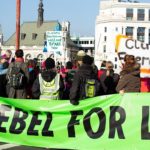