Extinction Rebellion needs to shed its fear of politics 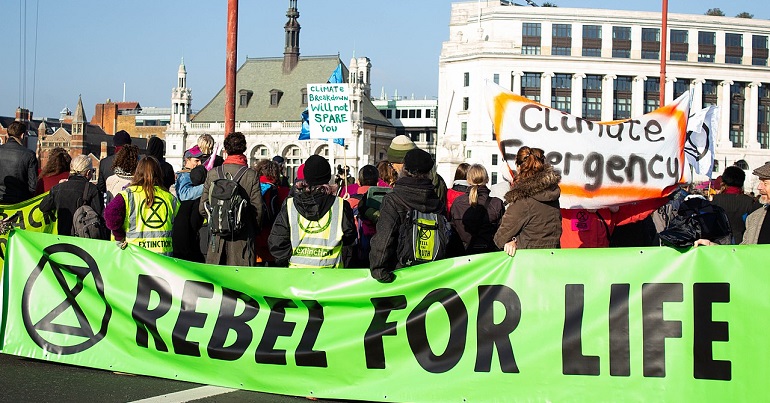 Extinction Rebellion (XR), along with the school strikes movement, has done game-changing work in putting the issue of climate change on the political agenda. For the first time it feels like there is a genuine understanding and acceptance of the urgency of climate change amongst the public (although we are still waiting for that to translate into policy). Many of the activists I’ve met whilst being involved are deeply passionate and refreshingly creative in their approach, and we all owe them a deep debt. Now, however, XR’s approach needs to change.

Key to this is tackling the infamous insistence of XR of being ‘beyond politics’. What this means practically is murky – I’ve seen XR activists range from not endorsing a political party to assuming a vague hostility to anything remotely connected to established politics and organising. The truth is, of course, that it is impossible not to be political in tackling climate change – it has been caused not by some meaninglessly vague notion of ‘human nature’, but by very deliberate, specific social, political and economic decisions. Climate change is inherently a political problem, requiring political solutions.

The problems of ‘beyond politics’ shows in our strategy. Whilst there is a beauty in the simplicity of calling for truth, action and citizen’s assemblies, it largely ignores how social change happens. Our plan, broadly, at present seems to be to cause enough disruption that ignoring climate change is no longer a viable option for government, that parliament then commits to zero emissions by 2025 and convenes a citizens’ assembly to sort it all out. Each of these steps has its problems.

‘Disruption’, physically seizing public spaces and occasionally buildings and disrupting traffic in busy cities (along with a few other acts of civil disobedience and legal protest), as a tactic has its place, and has worked well in generating interest and discussion amongst the public. It has also undoubtedly annoyed and alienated others that may otherwise have joined the cause, and is unlikely to capture media headlines or politicians’ attention indefinitely. By indiscriminately disrupting the lives of ordinary people, rather than those in power, we’re also not selling a targeted or coherent message of what the causes of the crisis are, and we end up often punishing those with little choice about their consumption habits.

The ‘economic loss’ argument for these disruptions, the idea that they will be so financially damaging to business and government, is even shakier. The loss of even the biggest disruptions caused by XR so far are dwarfed many times over by the loss coming to the pockets of the rich if they were to genuinely deal with climate change, many of whom have powerful lines of influence over elected representatives. We’re not going to force the government’s hand by disrupting central London for a few days – it’s awkward for them, but it’s not enough to outweigh the enormous lobbying pressure and their own ideological adherences. Our disruptions are important, but they won’t get us where we want to go, on their own.

Change happens piecemeal, from a thousand actions by ordinary people that eventually translate into the big policy changes that history focuses on. We need workers striking in key industries. We need activists physically blocking access roads to fracking pads. We need changes in party policies, and to put the issue higher on the agenda of trade unions. We need a coalition in civil society pushing for the same set of concrete proposals. We need all of these things, now. We only do that by building alliances with other, overtly political, groups.

That’s the practical argument, but there’s a moral one too. A certain amount of climate change is now locked in – this means our responses to climate change have to engage with the struggle for migrant rights, the threat of the far-right and what we spend on foreign aid to address the dislocation that a warming world is already bringing to developing nations. Climate change is primarily being driven by a handful of very powerful corporations, whose rights to pollute and mislead the public are enshrined in national laws – this means our responses to climate change have to engage with debates around ownership of natural resources and regulation of big business. Many consumption changes that would reduce emissions are not accessible to everyone – this means we have to start talking about national infrastructure, city planning, public transport provision, and of course, how we fund these things. To be a climate activist it is not enough to simply speak about the science – we have a responsibility to be frank about the political causes and consequences too.

It could be argued that this last set of issues, around what climate justice should look like, is answered in the form of citizens’ assemblies. These will certainly help, but aren’t enough. Firstly, it’s important that those selected to be on an assembly have been exposed to the arguments about how social justice intersects with climate change adaption and mitigation in the first place, and XR, the loudest environmental group out there, has a responsibility to be part of that.

Secondly, citizens’ assemblies aren’t going to determine, on their own, how we respond to climate change – they will hopefully play a prominent part in that, but many other actors, from local councils to central government to businesses to community groups will be vital too. We will still need pressure on those organisations to ensure they’re bringing about true environmental justice. There won’t be one vote or set of votes stemming from an assembly or even parliament – climate change will be a generational struggle composed of a million small parts, each of which will need to be informed by the arguments for true climate justice.

This will require Extinction Rebellion to start having those difficult, nuanced conversations about how climate change and environmental degradation intersect with issues of social justice, and the only way we do that right is by forging links with the groups already working on these issues and taking our lead from them. If we’re engaging in climate activism in a way that shuns collaboration with migrant rights groups, trades unions, feminist groups and other progressive organisations, we’re inevitably going to be aiming for a very stunted view of what climate justice looks like, and pragmatically we’re going to struggle to win too. It’s time for Extinction Rebellion to shed its fear of the political.

There is hope. A couple of weeks ago I attended a protest against the funding of the fossil fuel industry by Barclays bank (to the tune of £66 billion), but had to leave early to get to a march in support of some local striking workers. There’d been some difficulties in making sure the two events didn’t clash, which weren’t entirely overcome. I was worried that the speeches at the end of the march would be overshadowed by the XR protest which was nearby. What do I see as we approach though? A small line of smartly dressed XR protestors, clapping the march as it goes past, expressing solidarity with the striking workers.

As much as the looming climate catastrophe terrifies me, moments like that give me hope for our future.

« Climate change is environmental racism. A Green New Deal is the only way to fight it.
Boris Johnson has taken a wrecking ball to democracy – but we can fix it »