November 14 2019 is Equal Pay Day. From this date women in the UK are effectively working ‘for free’ compared to men until the end of the year, based on the average pay for full time workers.

Equal Pay Day falls even earlier in the year for some groups. WEP marked the Equal Pay Days for Pakistani and Bangladeshi women on 26th September and for Black African women on 4th October. For Pakistani and Bangladeshi women, the aggregate (full and part-time) gender pay gap with White British men stands at 26.2%, while for Black African women it’s 19.6%.

The OECD has shown that if we unleashed the true potential of women the economy could grow by an extra 10% by 2030.

The Equal Pay Act was passed in 1970. Women have been campaigning for equal pay for 50 years, but at current rates of progress it will be at least another 60 years until we reach parity. WE want to change this!

“I am backing the Women’s Equality party because I really do not want to die before closing the pay gap” ~ Emma Thompson, Actor.

The Women’s Equality Party want to:

The Women’s Equality Party are calling for companies:

The government also needs to play a role in fixing workplace inequalities. Caring responsibilities are one of the biggest causes of the pay gap, especially the societal expectation that women will shoulder the majority of early years childcare. The cost of childcare can be punishing, in particular for those on low incomes or wishing to undertake training or education. While many parents choose to spend time at home with young children, at least 600,000 stay-at-home parents would prefer to work if they could afford to do so. Evidence shows that a 10% increase in the proportion of mothers working could raise £1.5bn in increased tax revenue and reduced in-work benefits. Shared parental leave is available in the UK, but uptake is much lower than in other countries, since for most couples it makes no financial sense. To close the pay gap, we need to address these underlying factors to ensure that men and women have genuine choice about how to balance work and family life.

The Women’s Equality Party are calling on the government to

The Women’s Equality Party does politics differently: WE are a collaborative party. WE welcome affiliate members, who are also members of other parties.

WE call on the Green Party and other parties to close the gender pay gap using our ‘nickable’ policies.

Alison Marshall and Kate Pruce are the equal pay spokespeople for the Women’s Equality Party. 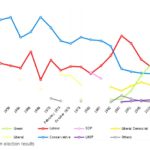 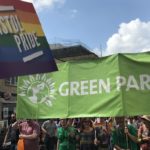 It’s time for the left to move beyond Brexit

« Unite To Remain will do more harm than good
International development should work for people, not profit »