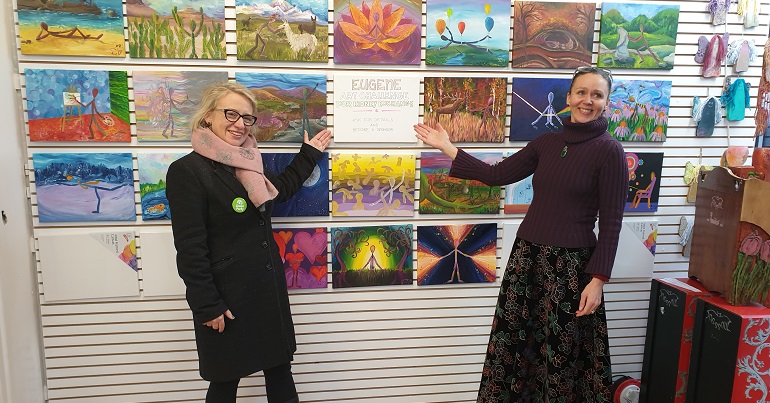 St Helens in Merseyside is a community that could do with more bright spots, like so many around the UK, particularly in the North of England.

As with so many places, it has been hit by austerity that has seen services slashed. There are many empty shops, with businesses swept aside by the tax-dodging worker-abusing behemoth that is Amazon and the advertising spend of the multinational chain stores.

But this week, the fast-growing local Green Party, with St Helens South and Whiston candidate Kai Taylor, took me to see two pioneering small businesses in the town.

From my Twitter feed, it might sometimes seem that my life is one long tour of great independent shops. And there is a little bit of truth in that observation.

Certainly, I had a great lunch with Kai and the team at the Phoenix Plant Based Eatery – vegan as the name suggests. I strongly recommend the salt and pepper chips – simple but delicious

And I also visited Paula at the Passsoul Gallery, in a pop-up shop in what would otherwise be another hole in the high street frontages.

On display are some of the citizen art projects that her community interest company has coordinated, as well as a wonderfully eclectic range of art for sale. I came away with a lovely green (of course) Christmas angel made from upcycled wood.

Today is Small Business Saturday – an attempt as the seasonal consumption gets into full swing, to ensure that the shops and enterprises that contribute so much, in taxes, in services, in environmental goods, in supplying stable, supportive jobs, in being embedded in their communities, benefit from the flow of cash.

It isn’t much in the light of the advertising barrage delivered online, on television, on billboards, for the multinational giants, the tax-dodging, low-paying, distantly managed Amazons and Tescos of this world, but it is important.

And that’s why the Green Party manifesto in the coming week’s election puts such a focus on supporting these small businesses, which have to be at the heart of our real Green New Deal, and the centre of thriving local economies that keep money local, rather than swooshing it off to the nearest tax haven.

The current dominance of the big companies was not inevitable. It is the product of past political choices (and the concurrence of a weak democratic system with uncontrolled big money lobbying), a direction that can and must be changed.

For the Green Party that starts with business rates, that hit retailers particularly hard. We plan to scrap business rates and replace them with a land value tax that is charged to landowners, not land users.

We want to increase of the Employment Allowance to £10,000 (currently £3,000) per year. The current limit means that a small business could employ one full time and one half-time worker on the average salary and not have to pay national insurance contributions. Our change lifts that to four full-timers.

Yesterday, I joined our candidate for North West Leicestershire, Carl Benfield, in the Bull and Lion in Packington. (Really, this isn’t all I do – and we did need to dry out after walking on the National Forest Way in a rainstorm.)

Just days into new ownership, it is clearly a crucial centre for the community, yet so many pubs like this have been lost. To help reverse that trend, our manifesto calls for slashing VAT on food and drink (from 20% to 5%) served in pubs, bars and restaurants, on hotel bookings and on theatre, music concert and museum and gallery tickets.

This will boost 125,000 businesses in the entertainment and tourism sectors – economically crucial, but also the brightening all of our lives. Media coverage of this election has often focused on how miserable we feel as a country – that has to change.

Other EU nations have done similar with VAT, including Ireland which introduced a 9% rate in 2011.

There are many more policies for small business to be found in the manifesto, but I’ll finish here with one close to my own heart. As a teenager, I worked for a small businessman selling hardware products – sandpaper and tools mostly – to the big supermarkets in Australia. He was highly successful, and he also nearly went broke every month.

For he bought most of his goods on 30-day payment terms, but the supermarkets paid him on what was supposed to be 120 days, but was frequently more likely 150.

These fines could administered on the same model used by HMRC to fine businesses who don’t complete tax returns on time.

The Government are taking tentative steps towards this policy – through suggesting that their ‘Small Business Commissioner’ (a sort of ombudsman, but even more toothless) who could explore ‘sanctions’ for the worst invoice offenders. It is isn’t enough but it shows that this is an idea whose time has come.

Our current business environment favours the parasites like Amazon, who don’t pay their way, and penalises the people trying to build a better life in their communities.

As in so many other areas of life, the status quo will not, cannot, continue. Change has to come, and the Green Party offers the way forward. We know that where lead, others follow, but communities like St Helens no longer have time for them to wait to catch up.