Barclays is funding the climate crisis. Now students are fighting back. 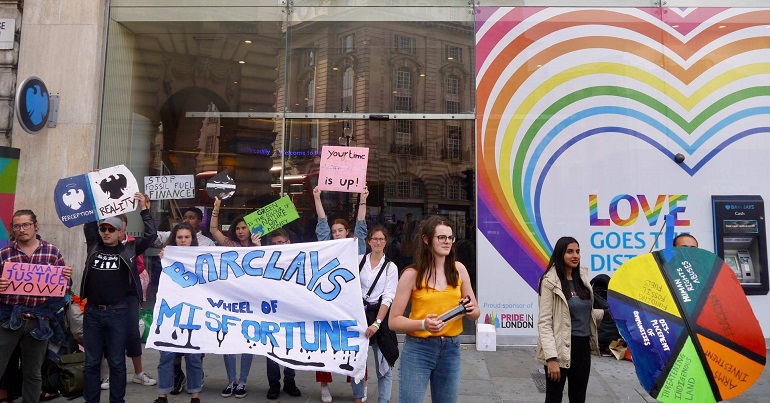 Another day, another climate crisis headline. We’ve just had the hottest decade ever. Australia is burning, just as the Amazon and the Arctic did before.

The human impacts are here, now and unequal. Man-made climate breakdown has displaced 22 million people since 2008; Zambia is on the brink of famine; rich countries keep emitting and poor people keep suffering.

We know what’s driving this crisis and it’s not plastic straws. In large part, it’s a fossil fuel industry which is intent on burning well over twice what we can safely use if we’re to stay below 1.5C. It’s the 100 companies responsible for 71% of greenhouse gas emissions since 1988. It’s a system which values profit over people and planet.

If we’re to stand any chance of meeting the aim set by the Paris Agreement to limit temperature rises to 1.5 degree Celsius, we need to take down this rapacious industry intent on profiting from climate disaster. In this, students and university staff can play a key role.

Last week it was announced that half of all UK universities have now divested from fossil fuels. Students across the country and beyond have been dismayed to find their institutions funding climate breakdown, sparking a massive Fossil Free movement. Through lobbying, non-violent direct action and committed campaigning we have helped, along with friends in the faith, parliamentary and other spheres, to delegitimise the fossil fuel industry and pave the way for legislative action against them.

We’ve weakened the standing of oil and gas companies. But with time running out, we need to go further. That’s why many student campaigning groups have begun to shift their focus towards the financial sector, leading to the birth of People & Planet’s Divest Barclays campaign.

Barclays is the biggest financer of fossil fuel companies in Europe, having invested over $85bn billion in the industry in the last three years. Without the crucial funding it and other banks to provide to the fossil fuel giants, their financial model would be totally unsustainable.

The Divest Barclays campaign both applies pressures on universities to cut ties with Barclays and generates public pressure through the targeted deployment of direct action. We’re already winning: for example, Barclays dropped funding for fracking in the UK thanks to sustained pressure from campaigners including ourselves.

Campaigning follows the precedent of divestment campaigns during the 1970s and 1980s, in which activists leveraged pressure on Barclays to stop funding South African apartheid. Students in particular held pickets, organised demonstrations and co-ordinated boycotts in a relentless fourteen-year campaign which forced Barclays to withdraw from the country. Our activism can help change history.

Now students are once again leveraging pressure on Barclays, this time calling for the withdrawal of funding of fossil fuel companies – starting with an end to funding for coal companies and tar sands. So far, students have applied pressure nationwide on their universities to boycott Barclays and escalated the campaign with direction action at Barclays branches.

What’s more, People and Planet activists from across the UK have made a tradition of disrupting Barclays’ AGM and exposing the environmental and social injustice they have perpetuated. This strategy has pushed them to take some minimal steps in the right direction, such as not directly funding coal projects. However, this does not prevent Barclays from financing companies investing in coal. We need more change and we need it now.

Pressure is building at the University level, too. There have been victories against Barclays across the country, from Sheffield to Loughborough, Bristol to Surrey. Both the National Union of Students (NUS) and NUS Wales have voted to boycott Barclays.

But now we need to step up a game. With climate catastrophe looming and little change at government level on the horizon, we need to harness every lever of power we can. By exerting pressure on Barclays, we can cut off the taps to the fossil fuel industry and help build a new economy of climate justice in place of one built on extractivism and ecocide.

2020 is the year to get involved. When students across the country take action against climate colonialism for Go Green Week in February, we’ll be targeting Barclays as one of the prime culprits of the current crisis. By coming together and exerting pressure on the ground and in the media, we can help stop climate chaos and build a better future. Together, we can bankrupt climate change.