How coronavirus is impacting workers in the electronics supply chain 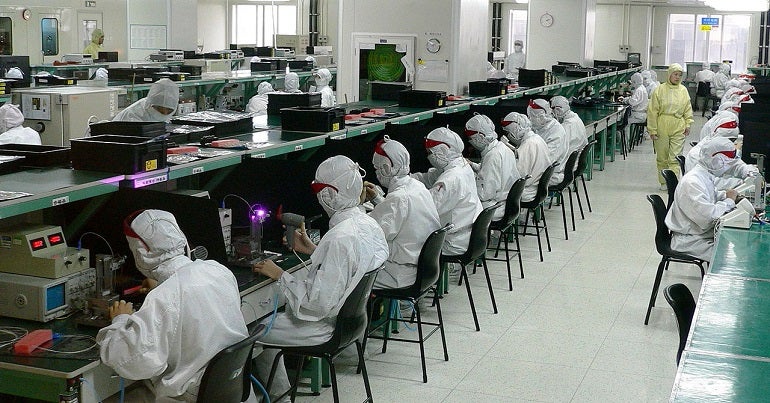 With millions of UK workers last week told to work from home, many are finding themselves increasingly reliant on technology. The demand for electronic tablets increased in China during quarantine due to more people learning and working remotely. So, who made your tech?

For months now, those in the electronics industry have been speculating about the impact of COVID-19 on supply chains for this brand and that product, emphasis was on predicting which corporations would come out of the crisis on top and which would face bankruptcy as a result.

Perhaps this is understandable. In many South-East Asian countries, including China, the growing electronics industry is seen as strategically important to the manufacturing of high-value goods for export, which drives growth and has been termed “techno-nationalism”. It is no surprise, then, that some electronics factories in Wuhan stayed open even during the strictest periods of quarantine.

Throughout February, brands were scrambling to move production away from quarantined areas, leaving their employees with nothing. In Western media, far less care has been taken to report on the working conditions of the people making these products, which many are now considering buying to help ease their own quarantine in the UK.

Just as with the UK, peoples’ reactions to working during a pandemic have differed greatly and it would be inappropriate to make sweeping generalisations about the needs of workers, who are themselves responding to the needs of their families and communities, as well as the demands of their employer. Some workers may have been keen to return to work, relieved to have a job after so many have been laid off or had their pay suspended, whilst others would not wish to expose themselves and their families to the highly contagious virus by returning to work. Across the globe, different workers will need different things from their employers during this time, but the undeniable reality is that workers who were exploited before the outbreak will face increased exploitation as a result of the outbreak.

How the Chinese electronics industry is responding to coronavirus

The independent monitoring organisation Electronics Watch published a report in February outlining how Chinese electronics workers might be affected by the COVID-19 outbreak and urged public buyers in the UK and Europe to take steps to protect them.

The report highlighted the varied ways workers rights are being violated in Chinese electronics factories, including discrimination against employees from Hubei province, withheld income and restrictions on freedom of employment. Also of concern for workers are lost sick benefits, forced seclusion and tensions between security staff and other factory staff. One example from the report draws attention to the use of student interns within China’s electronics industry, as students who were intending to intern at a factory for one month found themselves unable to return home after their internship ended due to government restrictions, and so they had no choice but to extend their internship for an additional two months.

It is noted that the Chinese Government’s instructions for support which employers should be offering to employees does not necessarily translate into the consistent enforcement of these sick benefits and it is highly likely that at least some workers will, or already have, found themselves in extreme economic hardship. Just as in the UK, some employers are not fulfilling their obligations to employees and are putting profit before people. The report further identifies the shortcomings of social auditing (the preferred method of monitoring working conditions for many brands and factory owners, which often doesn’t involve seeking out workers with grievances and can be selective in what is monitored) and should serve as a wake-up call to public buyers who are still not implementing independent, worker-driven monitoring.

The majority of information readily available to us regarding the impacts of COVID-19 on the electronics industry relates to corporations, CEO’s and shareholders – not the people actually making the tech. Because China is where the outbreak started, it is natural that most speculation would have focused there rather than the other electronics manufacturing hubs around the globe.

Extremely little is known about the effects on people already marginalised within the industry, such as home-workers and subcontractors, migrants or those employed by an agency. These people are in cities on every continent, and they deserve to be seen as more than workers, or steps in a supply chain which will create the laptop or tablet we in the UK order to help us get through lockdown. Public buyers, such as universities, have a duty to ensure dignity and safety for workers within their supply chains. The COVID-19 outbreak, which has exposed the human and workers rights abuses within the electronics industry around the globe, and not just in China, presents a compelling and urgent reason for institutions to affiliate to Electronics Watch. Those with power must leverage it now to protect the most vulnerable.