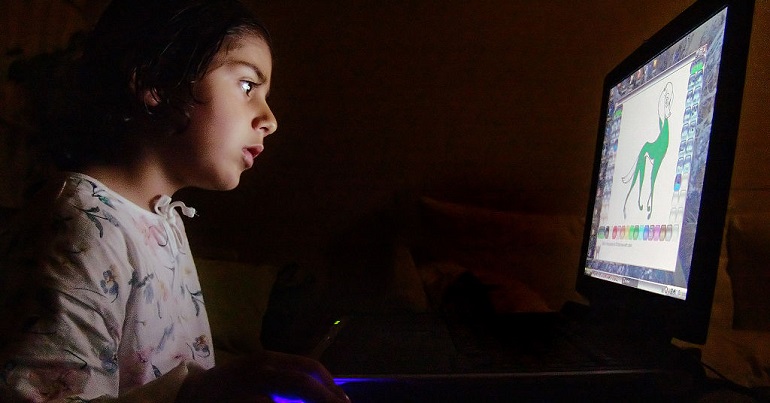 I think I’m on mute. I’m saying what I need to say, but it isn’t getting through. The meeting is continuing as if I wasn’t there, but I know that the actions that follow will be ones I have to do.

It’s become a familiar story over the past year; the online webinar that was previously the dominion of online university courses and sales pitches for software you never knew you needed has now become as much part of the office as the tea and milk money….and no less controversial.

Nowhere has it been more controversial than in schools. Concerns about safeguarding, appropriateness of online learning and teacher capability have meant some schools going for the quickest solution, which isn’t always the best online experience. Pre-prepared, off the shelf online learning, sold as a commercial product to cash-strapped schools, is available to buy.

Leading this controversy is an old phrase, re-awakened. The digital divide. In the twenty-four hours schools were given from the “you must open and deliver everything face-to-face” to “you may not open and you’ve got mass-remote teaching sorted, right?” it emerged that many thousands of children in the UK either didn’t have a device, were sharing a device among multiple people or didn’t have broadband connectivity at home. This then triggered a dilemma; do those children need to come into schools, the whole point of lockdown being that they are closed, or are they limited in the learning they can achieve? Cheap laptop supplies soon began to run out and the online experience for a selection of pupils began to crumble.

For progressives, this divide wasn’t a shock. For years inequalities in learning have been evident. But now, they were amplified. Those with low digital skills and less access to infrastructure have always been the same people who are disadvantaged in other ways. Digital skills and digital poverty link directly to low basic skills and financial poverty. What’s more, successive administrations’ education policy meant that schools that took more disadvantaged pupils often had the fewest resources; now those resources were stretched to the point that it wasn’t just the quality of learning that was at stake, but access to learning itself. Parents and school leaders became angry. “We weren’t ready for this” said the chorus of everyone, and the education secretary put the blame squarely at the doors of the school, telling parents that if they didn’t like the offer, they should go to OFSTED. However, if he wanted to play the blame game, he should have done his research; the reality is the lack of preparedness is a problem created by successive Conservative administrations…the blame for the problem lies a lot closer to home.

Back in the late nineties, the New Labour administration recognised that technology was going to become an important factor in education. The world wide web, which was in its fledgling days in terms of home and school connectivity, was fast becoming a thing people talked about. They founded the British Education Computer and Technology Agency (BECTA), a Quango, to look at the issue. By the early noughties, it was clear there was lots to do. Resources were not evenly spread and the system couldn’t cope with capacity. The JANET (Joint Academic Network) between universities began to encompass wider education institutions and BECTA was key in launching The National Grid for Learning. Digital Learning had really taken off, but the research showed a divide was beginning to emerge.

In 2006, as the Dot Com bubble began to burst and web fever reached its peak, BECTA was already raising concerns. In their review of progress that year, they noted: “Few schools yet offer access to school networks from remote locations for staff and pupils and there is still a significant minority of pupils who do not have home internet access”.  With the dawn of social media and the interactive web (then called Web2.0) and, latterly, smartphones, personalised learning became a tangible goal, but the cluster of studies into remote education kept highlighting the growing divide between those who could access digital learning at school and those who could at home. In a 2010 BECTA report on “narrowing the gaps” in achievement, they stated:

Understanding technology young people have at home is important. Those with good access to a computer and internet have a two-grade advantage at GCSE, so it is important to think about options for young people in technology-poor homes.

In 2012 BECTA became the first agency to burn in the new Cameron administration’s ideologically motivated “Bonfire of the QUANGOs”. The criticism that BECTA had become a tool for procurement, an allegation that was not without merit, meant that progress towards digitally enabled schools was lost and reset. In the years of austerity that followed, education returned to the ‘Three-Rs’ and as Facebook peaked and smartphone usage went off the scale, the digitally-poor became the digitally abandoned in a cycle of poverty that narrowed opportunities for social mobility.

Then, in 2014, an ambitious and young government minister, Matthew Hancock, became minister for Further Education. Wanting to make his mark, he set up FELTAG, the Further Education Technology Action Group, to re-look at technology in post-16 education. While many will find it hard to believe that the man responsible for the pandemic’s failed Covid-19 app was a technology pioneer, FELTAG was heralded as a breakthrough in digital education, a recognition by a Conservative government that technology mattered. Their report, foreworded by Hancock himself, stopped short of calling for investment to bridge the digital divide but did note the importance of remote education: “the funding methodology should encourage ‘learning presence’ not ‘physical attendance’”. OFSTED, it said, should look at colleges being able to provide learning that “[anyone] can access them from anywhere, anytime and using any computing device.”

Spurred on by his colleague’s success, then Education Minister Michael Gove formed the parallel Education Technology Action Group (ETAG) to look at technology in schools. In primary and secondary education the resources were sparser and the divide more obvious. The recommendations from ETAG, therefore, were stark: “Schools, Colleges and Universities should provide learners with an entitlement to a substantial minimum level of fast broadband connectivity which is based on number of learners and a rising expectation of increasing, institutional and personal use.”  Hot on the heels of these schemes, The House of Lords published a report, apocalyptically titled “Make or Break” that warned that Britain would lose its competitive edge if computing wasn’t addressed in schools. As part of this it looked at novel ways of addressing the digital divide such as: “many more local institutions—such as schools—could extend the range of their WiFi access to the local community.”

However, half a decade is a millennium in politics and, as the pandemic of 2020 hits, careers have moved on. Gove left education to become a poster boy for Brexit and Hancock, as Health Secretary, to face the challenges the pandemic brought to public health. In their wake, a series of ministers ignored the FELTAG, ETAG and House of Lords findings, focusing on more traditional challenges. Advisors that believed that personalisation was a socialist fad, opposed learning on mobile devices and no doubt pressured the government to move away from technology and accept no responsibility for the digital divide. The knowledge BECTA had built up a decade before smouldered in the ashes of austerity and the advisors who had pushed through innovations closed down, retired or went into the private sector, where business was following the technology curve with interest. Eight years after future gazers put “Bring Your Own Device” at its peak, children in the UK sat at home, wondering how they could access learning with no broadband and just one device in the family. Maybe they should have wondered why the publicly funded knowledge-building of two decades and five administrations was ignored.

The consultants, academics, teachers, politicians and businesses calling for innovation were all stuck on mute, their message clear but unable to be heard by a Conservative education model that had focused on testing, discipline and core subjects, not the need for infrastructure and innovation. Their response to the pandemic has been to point schools to private sector developed online learning, which often misses the personalised agenda and fails to meet needs. Meanwhile the charitable and social enterprise support networks, that are straining after years of funding cuts and red tape, bore the responsibility to meet needs that governments had ignored. Now, as the most disadvantaged of the nation struggle to access even those most traditional of lessons, its time for ministers to take responsibility, invest in support and, above all, unmute the voices who have called for education innovation since 1998.

Why private schools should be integrated into the state sector