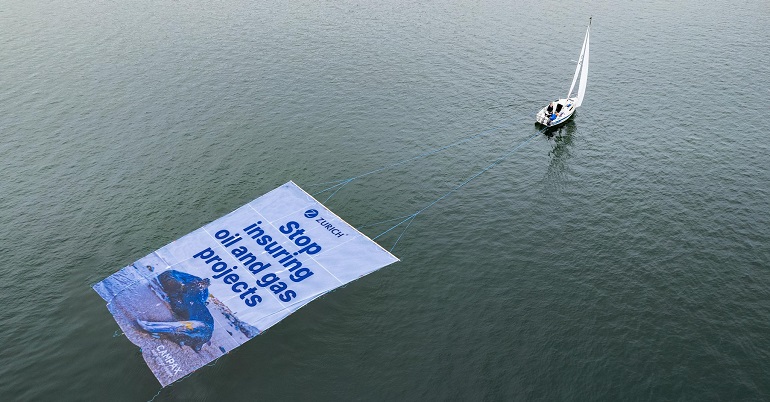 The day before Zurich’s Annual General Meeting, Swiss campaign group Campax has denounced Zurich Insurance’s climate policy with a stunt with a floating banner. The banner – which reads ‘stop insuring oil and gas projects’ – was pulled by a boat across Lake Zurich to Zurich Group’s headquarters.

As a member of the Net-Zero Insurance Alliance, Zurich has committed itself to limiting CO2 emissions in line with target to keep global temperatures within 1.5°C of pre-industrial levels. However, campaigners claim its current oil and gas policy is far from sufficient, and it remains one of the world’s largest insurers of oil and gas.

In November, Zurich took a small step away from oil and gas with the adoption of a greenfield exclusion policy, but only from companies that do not have “meaningful transition plans”. However, climate campaigners have claimed that this policy would still allow Zurich to insure most oil and gas expansion projects without restriction.

Just yesterday, the IPCC released the third component of its Sixth Assessment report which argued the 1.5°C target does not allow any further expansion of fossil energy production, and existing production must also be phased out. Jim Skea – a professor at Imperial College London and co-chair of the working group behind the report – has said: “It’s now or never, if we want to limit global warming to 1.5C. Without immediate and deep emissions reductions across all sectors, it will be impossible.”

Zurich Insurance is a member of the Net-Zero Insurance Alliance and has committed to limiting CO2 emissions in line with the 1.5°C target. Yet it is among the largest insurers of oil and gas. Climate scientists agree that the 1.5°C target does not allow for further expansion of fossil fuel production. Zurich Insurance must walk its talk and commit to no longer insuring oil and gas expansion projects, as well as ruling out existing fossil fuel insurance in line with a 1.5C phase out.