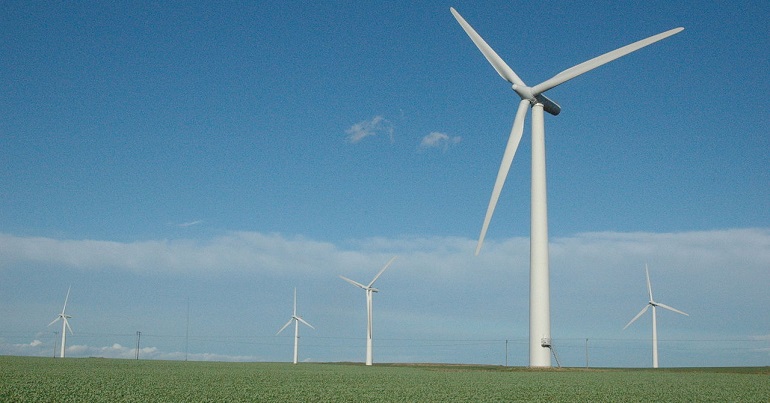 On Thursday 7 June, as Johnson’s government was in its undignified death throes, one of it’s major success was being unveiled to the world. The results of an auction for renewable energy production to power the UK into the 2020s mean that UK will have record renewables at record low prices. However, it is not all good news. The relative success of renewables makes the failures in other areas weigh heavier and, as Greens, we need to be consider that this is coming at a cost.

How did UK renewables become this cheap?

The UK government is sitting on a series of inadequate climate policies as a recent report by its watchdog – the Committee on Climate Change – makes clear. The massive exception to this is electricity policy.

Recent carbon intensity of UK electricity has plunged. Initially this was driven by subsidy schemes such as the solar feed in tariff, mostly set up under the last Labour government. As with the rest of Europe these schemes were wound back in the age of austerity.

However, the UK also introduced a scheme called Contracts for Difference. This would guarantee a fixed price to certain technologies for the electricity they generate. Whatever the market price a state owned firm would buy generated power at, it would then sell it to the national grid at the presumably lower market price. The difference in cost would be paid for by a small surcharge spread across bills.

This model follows previous subsidy schemes. Variable renewables have no choice when they generate, so without a fixed price they have to take the market price. This complicates and increases the financial risk of projects. Indeed, the worldwide boom of renewables has primarily taken place outside of particularly favourable conditions and has been supported by a growing system of fixed prices.

The key move with the Contracts for Difference scheme was to do this through an auction system. The contract and the guaranteed price would be sold to the developer who was willing to accept the lowest fixed price.

This is made all the more remarkable, as the Tory government did their best to effectively ben or severely curtail three of the key technologies – onshore wind, tidal, and large scale solar. As recently as April, the Treasury stripped out onshore wind and solar targets, on the grounds that they were too expensive (this auction suggests they are actually around a quarter of the cost of gas). At the same time the global renewable energy industry is experiencing fairly serious headwinds from supply chain troubles.

It should be no surprise that the technology that has done the best is the one that has most consistent support and the UK enjoys uniquely favourable geography to exploit offshore wind, which secured 7GW of the 10.8GW supply. Included within this is 32 MW of floating offshore wind, a new form of wind generation that could free offshore wind from the shallow oceans it has been restricted to.

The EIU estimate that the UK from the first three auctions and predecessor schemes has 12.5GW of offshore wind capacity in operation, with 7GW coming in this round. The fixed price agreed for the new renewables in this auction is lower than the market price, so the projects in this auction are going to save the UK somewhere between £1.5bn and £7bn a year and Carbon Brief thinks they could cover 13% of the UK’s current energy demand.

However, this still leaves the UK well short of the 40 GW government target by 2030 and 50GW by 2050. This is nevertheless a rapid construction of energy infrastructure. By contrast, Hinkley point C with 3.2GW of nuclear capacity has taken nearly a decade from construction beginning. At the same time, it is not enough to meet the UK climate targets, considering the increased electrification of transport and heating and certainly not enough for the Green Party’s more ambitious plans. This is all the more frustrating as a further 6GW of renewable energy was found to be ‘shovel ready’ last month.

Also, while key it is not possible to decarbonise using renewable energy alone, there also need to be a limit on polluting projects. Even as this auction was taking place government ministers, were calling for greater investment in North Sea Gas and dithering on if we needed a new coal mine. Energy efficiency plans still remain strangely and inexplicably unfunded. Producing more renewable energy alongside increased fossil fuel generation will not lead to carbon cuts.

Alongside this, variable renewable generation requires a quite different energy system from the one constructed around coal plants that could power up regardless of prevailing weather conditions. It requires grid upgrades and more transmission lines – something that the UK grid operator has struggled to provide. It belatedly declared a £54bn upgrade of infrastructure last week following the auction results publication. Most seriously, to make use of this cheap renewable energy the, UK needs storage for periods when there is little wind and sun. The government has yet to agree a reliable funding mechanism for this.

The liturgy of missing policies needed to achieve decarbonisation makes the support given, mainly to the offshore wind sector seem an anomaly. It is possibly explained by the fact that of all the variable generating technologies offshore wind looks most like the large-scale fossil fuels and nuclear that it is replacing. While highly efficient, the initial capital investment and technological barriers are substantial. There is unlikely to be community owned offshore wind, or distributed technology. Small, medium and even grid scale solar and onshore wind can empower small business and community groups. Offshore wind is the preserve of big business. It is possible that offshore wind was able to secure such relatively favourable treatment both due to it’s potential but also as it’s key players could effectively lobby.

This is where the key point of difference in the Green Parties vision of the future comes in from the one currently being formed. In addition, to wanting a selection of polices that lead to speedier and more coherent decarbonisation, Greens have always been clear that decarbonisation only sustainable if it raises living standards. Record low prices of renewables must translate into lower bills, not allow for the further extraction of profit. Moreover, cheaper renewables may be locking in both moral and structural vulnerabilities. Concerns are being raised in the USA at the lack of unionisation and hence poor retention of workers in the renewable sector. At the same time, the solar industry in particular has long supply chains, a worrying number of which end in East Turkestan, which is occupied by China and sees panels constructed with coal power and – more worryingly – with the forced labour of a people the Chinese state is trying to destroy.

The auction results are an unprecedented success for the UK renewable sector and show a clear way forward, but it does not mean that the industry does not need reform. It will also increase the need for a government to use this success to bring in policies to support decarbonisation across the country. Worryingly, this government seems to be too busy spending all of its own energy on internal collapse.