Obama Sell Out Again – This Time on Offshore Drilling

If selling out the prospect of meaningful health care reform in the US might be viewed as merely a missed opportunity and a misplaced desire to compromise and achieve bipartisanship, offering up vast stretches of America’s coastline to oil drilling is surely a sign that the Democratic leadership might not be as averse to triangulation as some of us would like to think. Sure it may not be in the same league as ditching clause 4 or executing a man with severe learning disabilities, but you don’t accede to your opponents demands before negotiations even begin. And this is a pretty substantial compromise on an issue, which though big on the campaign trail, Republicans aren’t even talking about at the moment; from the New York Times:

He said that his plan to allow drilling along the Atlantic coastline, the eastern Gulf of Mexico and the north coast of Alaska — ending a longstanding moratorium on exploration from the northern tip of Delaware to the central coast of Florida, covering 167 million acres of ocean — would balance the need to produce more domestic energy while protecting natural resources. But it is also intended to generate revenue from the sale of offshore leases and help win political support for comprehensive energy and climate legislation.

While Mr. Obama has staked out middle ground on other environmental matters — supporting nuclear power, for example — the sheer breadth of the offshore drilling decision will take some of his supporters aback. And it is no sure thing that it will win support for a climate bill from undecided senators close to the oil industry, like Lisa Murkowski, Republican of Alaska, or Mary L. Landrieu, Democrat of Louisiana

In case you think, maybe this is part of some backroom deal that means they’ll actually move forward on a climate change bill in the Senate now, TPM reports that Interior Secretary Ken Salazer says Cap-and-Trade is dead.

“I think the term ‘cap and trade’ is not in the lexicon anymore,” Salazar said, adding that supporters — including senators working on legislation — will focus more on ideas such as slowing pollution, creating jobs and becoming energy independent. “It’s in that context” the Senate will move forward, he said.

Doesn’t seem to be winning over much of the Republican party either, as House Minority Leader John Boehner unsurprisingly welcomed the move as a positive step only immediately blast the White House for not going further. That’s what happens when you accept the premise of you opponents but only follow through half-heartedly. They see you’re weak, they see you’re willing to compromise and they push for more. And people watching at home, reading the papers, will think well if we need to drill for more oil, why only in those states, why not open up even more, create even more jobs?

But, we really shouldn’t be surprised at all this, after all Obama is on record praising Clinton’s third way strategy. In The Audacity of Hope, he wrote, “It was Bill Clinton that recognized the categories of conservative and liberal played to Republican advantage and were inadequate to address our problems. Clinton’s third way… tapped into the pragmatic, nonideological attitude of Americans.” And as described by Jonathon Chait of the New Republic “This rhetoric removes the locus of debate from the realm of tribal conflict– red state versus blue state, Islam versus America–and puts it onto specific questions–Is the American health care system fair? Is terrorism justified?– where Obama believes he can win support from soft adherents of the opposing camp.”

On the issue of offshore drilling we can only hope that as Joeseph Romm at grist explains the areas opened up today won’t actually be worthwhile developing but that does nothing to message the White House sent out this afternoon. Once again pandering to moderates and big business, who will, never-the-less, not be satisfied, takes preference over principles and the left will just have to go along with it. 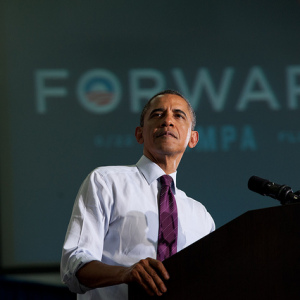 The Parallels for UK Labour from US Democrats

Past Occupations: What’s going on with Occupy in the US?

« The Paisley Project Chuckles into Oblivion
In defence of Stuart MacLennan »