It is time for Britain to decisively change course, and abandon its support for Middle Eastern and North African rulers (including those of Bahrain, Djibouti, Yemen and Israel) who fire on people protesting against them. This process might be helped along a little if Gordon Brown (and Blair, who initiated the process of making friends with Gaddafi) himself were to speak out, expressing regret that the last government didn’t take a far stronger line against the murderous Gaddafi.

At the moment, the signs that the British government is contemplating a serious change of course are limited, to say the least. Yes, Britain has now stopped certain arms exports to Bahrain and Libya. But just a week before its uprising began, William Hague was in Bahrain in effect pledging our support to the autocrats there, warmly shaking their hands, pushing for more economic and trade links, and making a few gentle noises about ‘reform’ to cover his tracks. Meanwhile, we have the astounding situation that LibDem peer Emma Nicholson is in Yemen to conduct trade talks, during their uprising. I can find no record of Nicholson speaking out about what the government there is doing to its people right now.

The British government needs to wake up. The world is changing. It is simply no longer acceptable to be complicit with the violent and provocative repression of peaceful protests abroad – or, indeed, at home… 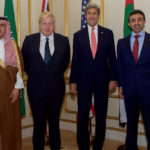 « 10 things you may not have known about RBS
Countering Council Cuts: Local Alternatives to Austerity »