The reaction from the right to Britain’s spluttering economy has shown an astonishing lack of imagination.

First out of the blocks, we see Boris Johnson tell us that we should abolish the 50% tax rate that is paid on earnings over £150,000. He reckons this will attract business people to the UK. Because apparently the problem with the British economy is that we are all layabout morons who don’t know a good business idea when it jumps out and steals our surplus value. And so the only thing left is to cut taxes for the very richest and hope that this persuades billionaries from other countries to stop dodging their taxes, to come and rescue us from our stupidity and laziness by dodging ours instead. I think that’s how the argument goes.

Of course, it’s a nice idea. The theory that cutting taxes for the richest is a good way to stimulate growth and so raise higher revenues is an interesting notion. Famously articulated when the economist Laffer had a meeting with Nixon’s advisers Dick Cheney and Donald Rumsfeld and apparently drew a graph on a napkin in 1974, it has become a favorite of the extremely wealthy and their pet politicians for decades. It has in fact been tried by various US presidents: George W Bush cut taxes for the very wealthiest Americans 10 years ago. Which of course worked brilliantly, adding $2.5 trillion to America’s national debt.

And of course the idea is nonsense. Richer people are not more likely to be entrepreneurial than poorer people. In fact, the poorest people in the world are the most likely to establish new businesses. There are many problems with the British economy. The rich not having enough money is not one of them.

Next up, we see Mr Osborne himself. He regularly tells us that the cuts are necessary to reduce the deficit. When growth figures were announced yesterday, another fact came out – one which got a little less coverage. Borrowing is up. The government had to borrow more this year than it did this time last year. As cuts undermine the economy, and as the government does nothing to re-build a new one, the revenue taken in taxes dropped. And so we had to borrow more to deliver even the reduced services. There’s a term for that: massive fuck up (or ‘death spiral’).

One might have thought that they would come up with some new idiotic right wing ideas for how to deal with the stagflation they’ve helped deliver us. But instead, it turns out they have just stolen wholesale the playbook George W Bush used when he ran the US into the ground: give everything to their rich mates, borrow more, and then blame it all on women. Great. 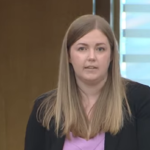