This 4th September marked the 30th birthday of Lagan College, Northern Ireland’s first integrated school – that is, the first school where Catholic and Protestant children were educated together.

It’s been an incredible journey – the oft-overlooked and remarkable story of a ground-breaking school started not by the state, but by brave parents who risked everything to have their kids educated alongside those from a different community background – at the time, a radical concept in a place where common sense seemed apparently radical. Virtually 99% of students from the age of 3 until the age of 18 attended either a state (Protestant) school or a maintained (Catholic) school. In a deeply divided society, the social damage inflicted by barely meeting someone from the opposite side of the divide for the entirety of your formative years is obvious.

In the face of complete inaction by the government, a group of parents started a group called ‘All Children Together’ in 1974, to push for a system where the province’s children could be educated together regardless of background. Faced with utter opposition, ACT supported a group of parents who set up their own school along the River Lagan that runs through Belfast – Lagan College – out of a scout hall in 1981. In that explosive year of republican hunger strikes and electoral polarization, the new school began with 28 pupils and a small group of teachers, only one of which was full-time. The school’s motto was Ut Sint Unum (That they may be one). Opposition to the concept was almost absolute – the churches were against it. One Catholic clergyman, Fr Denis Faul, condemned it is a ‘dirty political trick’ to undermine Catholic schools. Politicians were against it. The government refused to fund it. There was even a protest outside the scout hall on the school’s first day, requiring an armed police guard. The first principal, Sheila Greenfield, gave life to an iconic image as she led the children into the school hand-in-hand. One teacher was told quietly by a priest that if he took a job at Lagan, then he would find it hard to get a job in any Catholic school after that.

It shouldn’t have been this much of a struggle for the founders of the Lagan College project to make the school thrive – but it was.

Not that I was there – those who were there at the time can tell that story better. I attended Lagan from 1999-2006; happier, easier times than its difficult early years. My parents were committed to the concept, and had my name down since birth. They were keen to present an illusion of choice when it came to picking my post-primary school, but I wanted to go to Lagan anyway.

By that time, the school had a permanent home on National Trust-provided land in the Castlereagh Hills overlooking Belfast. It had very many full-time staff, over a thousand students and permanent buildings. It was grant-maintained by the government. Two excellent organisations (NICIE and IEF) now championed the integrated education cause and Lagan had become the first of around 60 integrated primary and secondary schools open all across NI. The prestige of being the first of its kind was now recognised by many visitors (including then-Leader of the Opposition David Cameron, who slipped his way out of an answer to every question from tuition fees to water charges that our A-level class asked him). The school’s story and importance was hammered into us at each assembly and anniversary to the point of desensitization – not that I didn’t understand the importance of it; just that it took for me to leave to go to university and to get some perspective about other people’s experiences of secondary education to get just how important Lagan was and is.

I went back to visit the Lagan classrooms during the South Belfast race in the last general election, where as a past student and then-candidate, I was invited back by my old politics teacher – the one that had inspired me to take an interest in politics in the first place – to address his class. It was due to the education that I got there that I ended up with the opinions I have today.

And that education, to counter the more unimaginative critics, was so much more than putting kids from different backgrounds into the same building. It’s not the “Don’t ask, don’t tell”-esque attitude of some of the more diverse state grammar schools (as a friend who attended a prominent state grammar put it). It’s about an education that actively emphasised respect, mutual understanding and tolerance.

Now five years out, many of my old classmates carry with them a quiet but fierce pride in the school, and in the integrated concept in general.

I recall tucked away in one of the staff corridors a framed cartoon caricature. It depicted two sides of a door – on one side, a group of parents and children trying to push the door open. On the other side, a gaggle of clergymen, priests, ministers, and familiar-looking politicians trying to hold the door closed. The caption read, ‘Opening the Door to Integrated Education.’

I asked why this wasn’t displayed out in the front foyer, where everyone could see it. I never got a straight answer. One possible answer is that the school didn’t think it appropriate to highlight the fact that those who now claimed to support integrated education had been its biggest opponents.

But I think it’s appropriate to. It’s to the credit to all involved in the integrated education movement that we’re at a stage now where there are roughly 21,000 students in integrated education – but its admirable progress has been undeniably hindered by many of the province’s politicians. And we shouldn’t forget that despite some of their public utterances, it’s hard to believe they’ve all really and truly changed their minds. It’s taken them thirty years to catch up with the courageous parents that started Lagan College – if they’ve caught up at all. We must push harder for further integration – it doesn’t mean anyone having to give up tradition. It’s not about making everyone the same. It’s about the right to an education that is the norm in most other societies. The public clearly want it – integrated schools are constantly oversubscribed and recent polling suggests broad public support.

Just because everyone pays lip service to it doesn’t mean the argument is won yet. The launch this week of a campaign pushing for further integration should be welcomed. Integrated education isn’t the ultimate panacea to sectarian hate, but it’s certainly a very important part of the solution.

Happy birthday Lagan. Thanks for the memories, and here’s to the next 30 years!

“The reality is that our education system is a benign form of apartheid, which is fundamentally damaging to our society.” – Peter Robinson, 2011 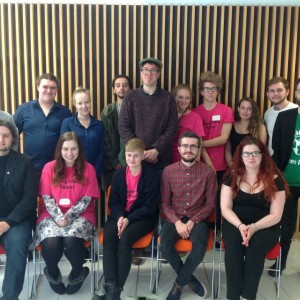 « Adrian Ramsay conference speech: “we are proud of the NHS”
Boundary review – Greens do pretty well »