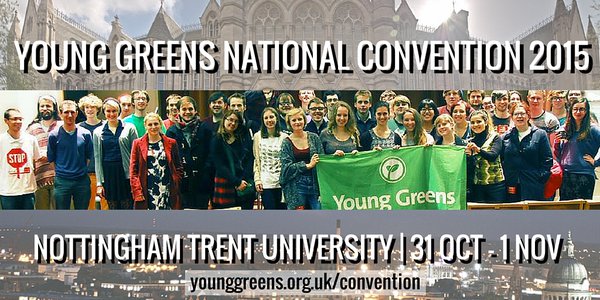 Additionally, there were also strong commitments made by the convention in instructing the incoming National Executive Committee (NEC) to ensure accessibility to events and to support local elections across England & Wales and assembly elections in Wales and London.

Convention began with an informal address by Green Party leader Natalie Bennett who reaffirmed the Greens’ commitment to helping fight the punitive sanctions of the Tories on young people through rising costs of education and rent prises to denial of welfare. She also reaffirmed the party’s commitment to challenging the norms on climate change, at one point answering a question about nimbyism on wind farms by explaining that community-owned renewable energy projects can help challenge such discourse. Natalie also spoke about the importance of the COP 21 in Paris as an opportunity that cannot be wasted.

After this discussion of our core beliefs from Natalie Bennett, convention then explored intersectionality in a dedicated workshop session. Admittedly, I hadn’t come across this term before, but the session from now elected Young Greens Co-Chair Sophie Van der Ham introduced others like me to it by helping members gain an understanding of how diverse our Green community is. We did an exercise to examine our privilege and explored where the various intersecting identities meet. This session helped set out and define an important mission statement for the Young Greens, and reaffirm the importance of the liberation groups who are now officially recognised in our constitution.

Convention saw the announcement of the new NEC members who are by overwhelming majority self-identifying non-men, with only three men sitting on the eleven-strong committee. The new NEC also sees the inclusion of Regional Senate Co-Chairs as having a voice and vote at the executive, a move to encourage the Young Greens to have greater consideration on where events such as training or action days are held. We are likely to see the North finally be given due attention with a strong election pledge by other new co-chair Hannah Clare to ensure the region’s inclusion as well as an overdue start for a Wales Young Greens. Already a day after election, new regional senate Co-Chairs Rhiannon Ennis and Ernestas Jegorovas have begun consulting Welsh Young Greens on finally establishing a regional Young Greens group with seats on the regional senate. As a Welsh Green myself, this is a welcome move.

For the convention’s AGM a prioritisation ballot was held for the order of motions. The EU referendum sub-committee’s motion calling on support of the ‘In’ campaign came top of the list and was the first motion debated. As a proposer of the motion, I was moved to have the opportunity to present a cause particularly personal for me, as I have a family who could be torn apart if we vote to leave the EU. Being the grandson of a Hungarian refugee, proposing such a motion on the fifth anniversary since his passing was an honour, but the fact it received a unanimous vote in favour was not only life affirming, but a confirmation of why I am a party member.

The conference support of the EU didn’t stop there, with a highly successful workshop motivating members to contribute ideas and lay out potential campaign tactics to be used. Concerns were openly discussed in terms of running a campaign and most agreed that a distinct Green voice must add to the positive discussion about staying In. We were joined at conference by FYEG Executive Committee Member Johannes Butscher and Anne-Sophie Bauer of Junge Grüne Austria who offered their solidarity to our EU campaign. We have a unique opportunity over the next year to build strong bonds with our European family and to add an English and Welsh voice to the FYEG, an opportunity we should take full advantage of. With a commitment to the In Europe campaign as an NEC priority, a unanimously-supported convention motion and support from our wider FYEG family a strong, unified Green argument to remain in Europe can be made.

Next year will be an interesting year for the Young Greens as we face several challenges in fighting Welsh, London & Local Elections, a potential EU referendum and calling out this government on its appalling renewables record. With a strong NEC, clear set of priorities and remodelled constitution we are ready for these fights. Young Greens are unified as a group more than ever and we’re a force to be reckoned with.

« Young Greens committee 2015-16 elected
Majority of Stormont votes for same-sex marriage, but will not pass into law »