Feminism, journalism and practicing what we preach

Inspired by the Atheists’ Guide to Christmas which advertises six of its contributors, all men, on the jacket I decided it was time to do a little light empirical research. Incidentally, readers may be pleased to hear that women are allowed to be atheists as, of 46 contributors, the editors did make room for 13 women, even if none of their names made it onto the front cover.

In the spirit of the Electoral Reform Society’s ‘Counting Women In‘ campaign that is highlighting the fact that there are four times as many male MPs as female, as well as the excellent F-Word pieces on gender representation in comedy I thought I’d join in with a quick and dirty analysis of the UK’s left press.

As we can see from the snapshot (below) in nine left-leaning print publications that produce 243 articles only 73 were written by women. In other words more than twice as many pieces were written by men as women.

It’s interesting that the ‘worst’ half of the table includes the explicitly Marxist papers and the Labour Party affiliates who are often keen to promote gender quotas in various elections. Perhaps it’s time to introduce some quotas in their publications?

Perhaps it’s unfair to pick on Tribune, who are reportedly struggling to stay afloat, but there may be a connection between having more than seven times as many pieces written by men than women and struggling to find a paying audience.

Of the ‘better’ half special mention must go to the New Internationalist who were alone in having more pieces by women than men. Interestingly all four come from a more pluralist, less traditional leftism. Pacifism in the case of Peace News, the Green Party in the case of the in-house magazine Green World and the explicitly pluralist left for the New Internationalist and Red Pepper.

Mind you, before we start back slapping and giving out cigars, it comes to something when having twice as many pieces by men than women puts you with the angels. What’s clear is that the left in general needs to up its game and the more traditional sectors of the left doubly so.

A note on methodology

The table represents how many articles were written by male and female authors and in a few cases where articles had identifiable authors of both sexes. I’ve left out entirely all articles and editorials that have no attribution. The ratio column refers to the number of men to women – ie if the ratio is 2 that means that for every female author there are two male authors.

I’ve left out the (even more) obscure publications sticking to print publications from the progressive left. I’ve deliberately not included explicitly feminist or women’s press as if they don’t get women to write for them the mind boggles. In both cases this was to avoid distorting the figures.

In each case I’ve taken a single issue of each publication. To be truly comprehensive you would really need to take a year or more of back issues – but my life’s a little too short to get quite that obsessive!

On that note I’ve also gone for the number of articles written by men or women. Alternative approaches could have been to count the number of authors (a number of publications had single writers who produced a numerous articles) or by column inches / pages. The latter would have quite a significant impact because some of these publications do seem to favour women reviewers (a third of a page each) and male article writers (one, two or more pages per piece). Again, that ups the work load a touch too far for me.

My aim was to get a useful impression of where we are and I hope this snapshot does just that. I’m sure this method could be extended to other kinds of publication or over a longer time period. Feel free to your counting hats on! 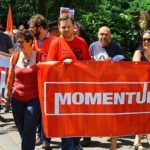 The future of the Labour Left under Keir Starmer

« Past tents: A brief history of protest camping
Plan B »