Will Duckworth – the Green Party finds a new star

Will Duckworth was on the registration desk at conference yesterday. “I volunteered to do it before I won the election” the new Green party deputy leader apparently said. “I’m not going to let them down”. At the last conference, whilst most of the older members retired to beds in hotels, he curled up in a sleeping bag on the floor at the Young Greens crash space.

“Our entire election strategy was putting him on the doorstep, getting him to talk to people” says one of his fellow Dudley members. If the fear was that his skill at talking one on one wouldn’t translate to one-to-four hundred, then today, he more than answered it. There were tears, there were copious giggles, there was anger and there was a heartfelt standing ovation.

Introducing himself with an apology to those from anywhere south of Birmingham “we didn’t have time to get a translator”, he went on to outline his background – working class family, maths teacher. He was sacked by his head teacher for being an overly effective trade union organiser, won an industrial tribunal but didn’t get his job back. His rise in the party has been rapid – from new member to council candidate to councillor to lead Euro candidate in the West Midlands to deputy leader in only a few years. But in his telling of the story, you could see why – personable, funny, confident. When he revealed that he had become a grandparent for the first time last night, the grin was so broad that half of the room must have been in tears. When he asked about the world his granddaughter was born into, it was a genuine concern – somehow avoiding the feeling of cliche despite the point being obvious.

In Dudley, he put his vote up tenfold in a couple of years, storming to victory in May. His anger at the coalition and its cuts was deep, and personal – talking of a council house he canvassed where the heaters have been broken for six years. It had been on the priority list to have them fixed because there were two sick children there. When one of the children died, it lost its priority status – until Cllr Duckworth got on the case.

Duckworth was clear how he saw his role – an internal support for the party more than an external face. It is true that this is crucial, and his speech reflected that – heavier on stories of electoral success and the strategies which delivered them than policies or bashing of opponents (though there was some of this too). And it is true that the party has much to learn from the West Midlands, whose co-operation as a region has reaped serious rewards – including the seat of our new deputy leader.

But if this is his only role, it will be a shame. Today he showed himself to be the voice we have long been lacking – northern, working class, funny, passionate. Will Duckworth was a surprise victor in this race, but as of today, it seems that the party has a new voice, and a new star.

update – a video of the speech and the full text are available here: http://greenparty.org.uk/news/2012/09/08/green-party-deputy-leader,-councillor-will-duckworths-conference-speech-in-full/ – thanks to Tom Harris in the comments below. 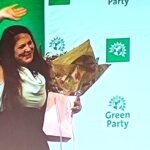