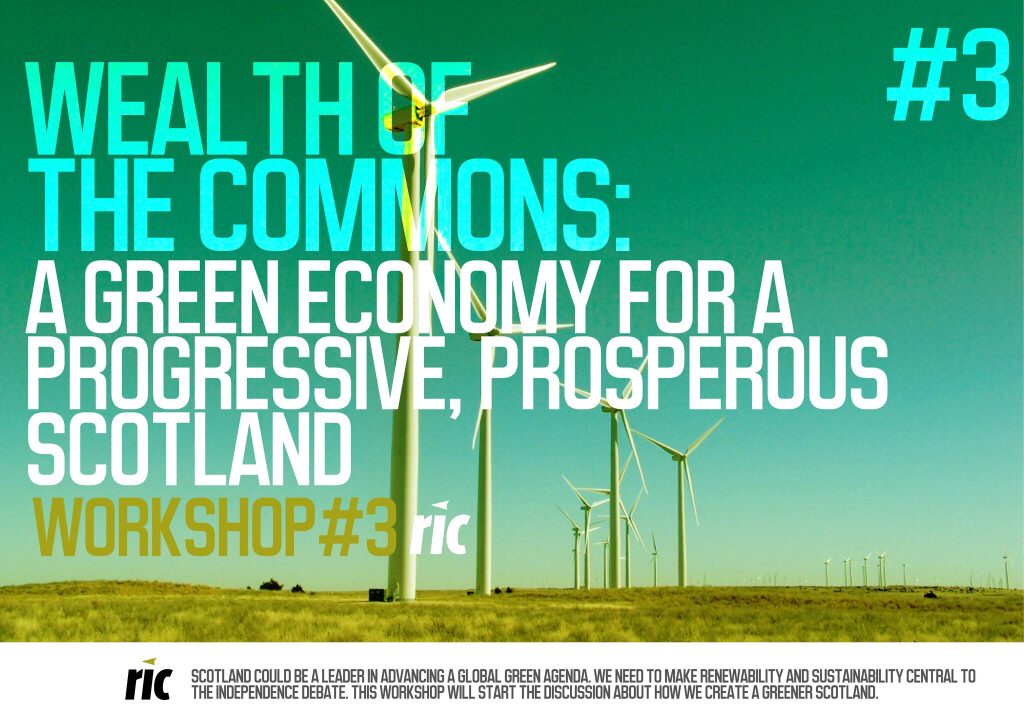 Tomorrow, Bright Green will host a workshop on the Green economy as part of the Radical Independence Conference in Glasgow. We were incredibly flattered to be invited and the graphic RIC have made for us, which you can see above, is beautiful. It is, however, a bit misleading.

That’s because the session tomorrow won’t be about wind turbines, or solar panels, or recycling. There’s no doubt that these industries are essential for environmental sustainability and for energy and resource sovereignty, but we hope to look at the economy in a more radical way than that. This event will be about a Green economy, not just an environmentalist one.

We’ve called the session “Wealth of the Commons”. We believe that (contrary to repeated claims that “there’s no money left”) Scotland is rich in natural resources and human ingenuity that could be used to create a socially just economy that has little or no negative environmental impact. And we’ll argue that the way to make this happen is through common ownership and control of those resources.

We’ll explore the concept of with a range of examples, from Highland community land buy-outs (closely related to the original meaning of “the Commons”) to the co-operativisation of modern businesses. We’ll also look at the limitations of national and municipal state ownership, and how direct common control can be brought to government too through models like participatory budgeting.

The independence debate – and the Radical Independence Conference in particular – is an opportunity to free ourselves from the conservative assumptions of day-to-day politics and propose more ambitious change. An independent Scotland is a blank slate. Join us if you can tomorrow to start to draw a new economy.

The Radical Independence Conference takes place tomorrow, Saturday 24th November, at the Radisson Blu hotel in Argyle Street, Glasgow [map]. Registration is from 10-10.45am, and the Bright Green workshop is at 11.45am. Advance tickets are recommended and are £10 waged or £4 concession.

« Greens win Edinburgh council stand against Workfare
Well there is something wrong with the University of Birmingham – Zahawi. Swift was right! »