Those hep cats over at Project Fear HQ have chosen a GIF, very much the Ryan Gosling of image formats, to present their spin on the independence referendum poll just released by Tory sugar daddy and Viceroy of Belize, Lord Ashcroft:

The No campaign say that while 49% of Scots think independence is the Scottish Government’s priority (though in the hands of their spinners this becomes “Salmond’s priority”), only 3% think it should be.

This is a bit of a busman’s holiday for me, since I’m knackered after spending all day working on another poll for another pollster. But upon looking into the full data tables from the poll (PDF), we find that this goes further than spin. It’s a flat-out lie.

The figures they claim represent what Scots think ought to be the government’s priority exclude every single person who said the Scottish Government does have the right priority.

Is it any wonder they can make it look like respondents reject the priorities of the SNP government when anyone who admitted they didn’t was stripped from their sample?

The figures they give are (roughly; for reasons I cannot understand they don’t all exactly tally with the real numbers) from Ashcroft’s Table 4 on page 9 of the PDF, which is clearly marked “Base: All those not saying that the Scottish Government has the right priority for Scotland”.

And how many people said the Scottish Government has the right priority for Scotland? A handful maybe? No. Thirty-six percent. That’s how many people had to be airbrushed out to give the No campaign the GIF they wanted.

I would ask the No campaign to show us a little more respect, but anyone naive enough to think that’s ever going to happen probably doesn’t deserve it.

By the way, there were a few people who said that independence isn’t the Scottish Government’s priority but should be; 15 in fact. And how many said the priority should be staying in the union? Three. Not three percent, 3 people. Not even enough to earn a percentage figure, it gets a lowly asterisk instead. Don’t expect to see that on a Project Fear GIF anytime soon.

Pretty much every paper in the country has repeated this lie, and it turns that that’s not because they’re getting their info from an animated GIF. Lord Ashcroft’s press release also misrepresented his own data in exactly the same way:

@BaffieBox @Telegraph 1 of 2 – Release we were given made no mention of diff base for table 4. Have phoned Ashcroft office for statement

…and then ‘clarified’ it this morning, conveniently after the papers had all gone to print carrying the false information released overnight:

@BaffieBox Ashcroft’s office says it has ‘clarified’ base for that question this morning. Thanks v much for pointing this out 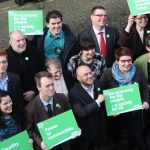 The Scottish independence movement needs the radical vision of the Greens 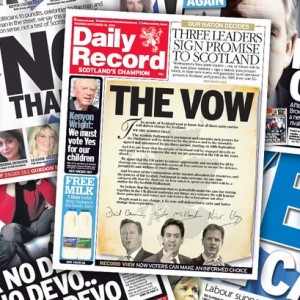 The Vow that can’t be written down

« Australian election returns disappointing result
The Greens: A movement without the mass »