What happened in the Norwegian election?

Aled Dilwyn Fisher has lived in Norway for three years and is a Research Assistant at the Norwegian Centre for Human Rights.

On Monday, Norwegians took one look at the rest of the world, thought, “that mess looks like fun”, and decided to vote for parties that would gladly turn the country into yet another run-of-the-mill, unwelcoming European neoliberal democracy.

Perhaps that’s the only way to explain how one of the few places to buck the financial crisis and the austerity programmes that succeeded it decided to clear out the government that had overseen this exceptionalism, and instead hand the tiller over to, among others, the party to which terrorist Anders Behring Breivik belonged for the best part of the planning of his attacks. Maybe Norwegians feel they have it too good, and don’t deserve to laud it over us for a minute longer.

But let’s put aside our cynicism, at least for a few paragraphs, and look at what actually happened on Monday.

Firstly, the Norwegian Conservative Party did not “win” the election; the biggest party, by some seven seats, remains Labour. Rather, right-wingers, collectively, were the winners. The Conservatives, with their 48 seats, and Breivik’s former comrades, the Progress Party (29 seats), need just one of the two other borgelige (right-wing) parties, either the Liberals (nine seats) or the Christian Democrats (10 seats), to secure an 85-seat majority. The remaining question now is which potential constellation emerges. Will it be a minority “blue-blue” government of Conservatives and Progressives (sic), a majority government with one of the Liberals or Christian Democrats, or a broad, four-way 96-seat majority?

The fact that any of these alternatives is possible is the primary reason why the right has, together, emerged victorious. Previously, they just couldn’t get along. The Liberals weren’t even sure they could call themselves borgelige (after all, their Norwegian name, Venstre, literally means “left”). They, and the Christian Democrats, certainly couldn’t cooperate with the right-wing populists over at the scandalously-named Progress Party. And the Conservatives, despite experience of coalitions in local government, couldn’t quite find it within themselves to trust the Progressives on the national stage.

All this changed during the last parliament, and a careful strategy of borgelig cooperation has led them to Monday’s triumph. Even though the Progressives suffered the biggest absolute losses of any party (a drop from 22.9 to 16.3 percent), the team effort was decisive; indeed, they were just two seats off a majority in 2009 (and actually received more votes than their opponents), but were not in a position to work together. The right have since formed enough joint platforms in opposition to convince people that they really could put aside their differences to rid the country of a government of which people are evidently tired.

How people were allowed to become tired of such a seemingly-successful government is something for which the (former) governing parties themselves must answer. The “red-greens”, as they were known (due to their party colours, rather than the presence of any ‘big g’ Greens), have looked like an ailing government for much of the three years I’ve lived here. Think British Labour, pre-2010 (just actually left-wing). The red-greens, too, have had a hostile press with which to reckon, but their failure to present a unified message that continues to resonate with people is something for which they only have themselves to blame. In the end, the three parties lost just 14 seats in total, but they failed in countering a resurgent, unified right.

Of the three red-green parties, the Socialist Left Party had by far the worst election, and should be massively relieved to have ended up just 0.1% over the four percent necessary to guarantee representation. This, nevertheless, represents a loss of roughly a third of their votes from 2009. As well as some personal leadership scandals, the party has seriously suffered from the coalition squeeze effect commonly associated with the Lib Dems, and they have fundamentally failed to convince voters of their ability to ensure their policies make it through tough negotiation processes. This certainly affected them more than the other small red-green party, the Centre Party, which represents powerful rural interests that the government has (largely) been quick to appease. But, even here, discontent among core voters of these smaller parties has contributed to the feeling that the red-greens were running out of steam (although, in fairness, the Centre Party had a much better-than-expected election, losing just one of their previous 11 seats).

One of the key issues on which the Socialist Left Party lost its previous supporters was the environment. Green voters were partly coaxed away by the Liberal Party, which presents itself as very “green” (despite announcing its desire to enter government with a party that denies anthropogenic climate change). But one of the shocks of the election was the breakthrough of the Green Party, which saw its vote rise from 0.4 percent in 2009 to 2.8 percent, giving them their first parliamentary seat in their history and nudging out the far-let Red Party, who narrowly missed out on their first seat in decades.

However, despite being a previous Green Party member and candidate in the UK, I welcome the Greens’ breakthrough with a great degree of caution. To be fair, they have contributed significantly to putting Norway’s elephant in the room – oil – on the election map. For once, politicians were forced to discuss the sustainability (economic as much as ecological) of the industry. The election was greener than many appear to remember, with another big slice of the responsibility going to the “Climate Election” coalition involving over 100 green groups and trade unions, as well as the state church.

Nonetheless, the Norwegian Green Party is not the Green Party of England and Wales. The latter had and has its own problems regarding acknowledgement of its clearly left-wing orientation, but the Norwegian Greens are firmly in the politically-illiterate “neither left nor right but forward” camp. While the Greens have effectively (though not entirely) ruled out government cooperation with the right, the fact that it was ever a question shows the extent to which this is very much a “single-issue,” “light-green” party. They had little, if anything, to say on social justice issues during the campaign.

Tellingly, when they were accused of having an economic policy that would drag living standards back to the 1980s, their lead candidate in Oslo responded positively, saying that sounded great because, er, the 1980s were great. As an ‘86 model myself, I concede that he has a point, but it’s hardly the progressive green vision that other Green parties have worked so hard to craft. The trade unions are particularly worried about the potential impact of the Greens, and with good reason.

All in all, this adds up to not an awful lot to celebrate from Monday. No, not everyone in Norway has suddenly become a viciously right-wing Breivik sympathiser (see the Progress Party’s ailing support), but the fact is that, like in so many other countries, the left, despite its historical and comparative size here, has failed, at least collectively, to present a vision that people find appealing enough to put their trust in again. The right are winning the culture wars (about “Norwegian values” and immigration), just as they are winning arguments on economic policy in favour of smaller state, neoliberal economics (despite the obvious evidence to the contrary in how the Norwegian state’s role in the petroleum industry has secured the country’s unparalleled wealth and prosperity). This is a testament to the hegemony of liberal economic orthodoxy (the one thing that really unites these seemingly-different borgelige parties), and a worrying sign of the extent to which anti-immigration politics can catch on in even the most solidarity-orientated societies.

There remains, despite all this, cause for hope. If the momentum created by “Climate Election” and various greens (both big and small ‘g’) can be sustained, the questions being asked about the ecological and socioeconomic wisdom of continued petroleum dependency will not only open the most pressing debate around Norway’s future, but also expose contradictions in any eventual coalition between the oil-hungry Conservatives and Progressives, and the somewhat-greener Liberals and Christian Democrats. With Labour out of government, the potential for trade unions to become even more involved in the climate struggle also increases. Either way, the borgelige, who have only relatively recently learned how to sit around a table together, will not be getting an easy ride. 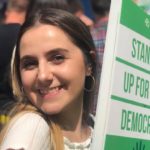 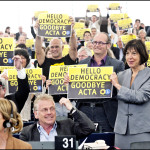 Greens put forward a sixth vision for the future of Europe