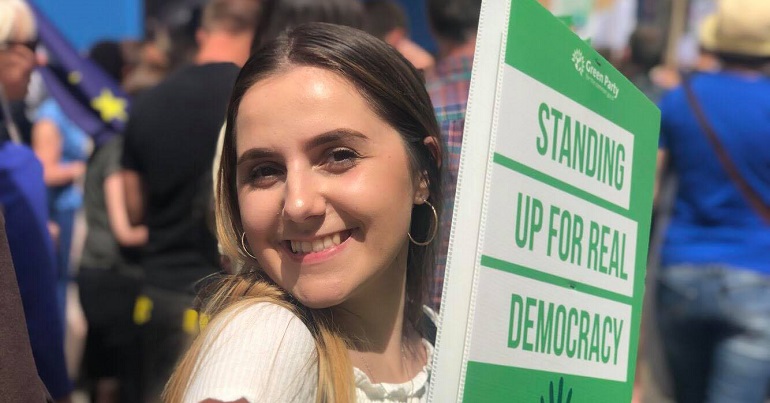 Young people are voting Green because we are the only party that is standing up for us and our futures.

As a young person myself, I am disgusted at the ageist language shown towards my peers and the way we are ridiculed in the media. If we speak out, we are uninformed and inconvenient. If we stay silent, we are uninterested and have no care for ourselves, this country or this world. Young people have a constant battle every single day against those that want to silence us and what we stand for.

Ultimately, politicians in other parties want to silence us because we challenge them. We debate them. We ask them to look into what we have as a future and ask if they would settle for the same. A melting world, full of hatred and division, the inability to afford the necessities to live, a mental health crisis surrounding us and even more.

We have the right to feel unmotivated and ignored by those running this country. They do ignore us. And the bitter truth is that they ignore us because they are the ones that created this bleak future for us, their children, and the future of this country. And they don’t want to admit their failures.

Young people standing up for our futures

Young people are claimed to be violent, anti-democratic and driven by the fear of being politically incorrect. This could not be more wrong. We are taking to the streets in non-violent protests, as seen by the #YouthStrike4Climate.

Caroline Lucas has openly spoken with Greta Thunberg, the young activist demanding that we are spoken to and climate action is taken. Our party leadership, councillors, MEPs and those with roles within the party consistently show that we are not afraid to be seen.

We are at the People’s Vote marches, Anti-Trump marches, Women’s marches. We’ve campaigned to shut down Yarl’s Wood, to save the bees, to make upskirting illegal. We recognise non-binary & trans people as valid, and so much more. This party is well ahead of its time, and we only seem to be taken notice of when it is too late. Far too often our party policies are seen to be copied in major party manifestos a few years later.

We have had enough. We need urgent climate action. We need an economy that doesn’t create 171 billionaires whilst food banks are still required for families to get by. We need equality for women. We need LGBTQIA+ rights and education within schools. We need an equal society where it doesn’t matter what background you have, your sexual orientation, your race, your religion – where everyone has the same opportunities. We need a future that isn’t being destroyed at every turn.

« Siân Berry on track for best ever Green result in London Mayoral election
Corbynism 2.0: Why Momentum backing a four day week is a big deal »