This is the third of three referendum night blogs. Read the first and second.

6am. Rain and fog. Edinburgh Park and Ride. Defeat.

It’s a long way home from there.

We had just witnessed the count for the Scottish independence referendum and we lost. Unambiguously.

I had often felt it unfitting to end this two year carnival with a simple yes/no X on a slip of paper. The definition of an anti-climax. Such a process is utterly incapable of containing the hopes and dreams we have for our country.

And yet of course it did matter. A lot.

On the tram journey home we tried to talk ourselves out of despondency. Sometimes we slipped back. A tear was shed, or two. Yes posters we passed didn’t help. I had a feeling that after all the excitement someone had pressed a reset button. Back to square one. No more political imagination.

But as we chatted and pondered a clearer picture began to emerge. One of a Scottish electorate standing up to take part. One of millions of people making bold decisions. A story of people not doing what they were told, and believing in something different.

Despite folk being told that voting Yes would mean migrants being thrown out of the country, exclusion from the EU and the pound, indeed the very demise of the Scottish economy, despite all this an incredible 85% of our people voted and gave 45% their vote to starting a new state.

As the dust settles that fact will remain. And with it, Scotland is a changed place. 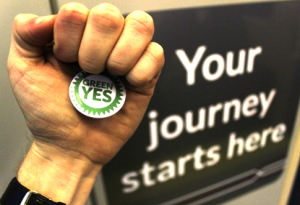 The many thousands of new people who took part in this election will shape our politics completely beyond recognition in the coming months and coming elections. It is vital we encourage and help them in doing so. This is a time for movement building. We need to be asking Yes voters to join a political party, join an activist group, join lot of groups. Time for holding a meeting or starting an email thread. Let’s conspire, plan, do things and with new people. The momentum can build from here. Get your favourite books and blogs back off the shelves. Find the politics we can build on with the opportunities we do have.

Constitutional reform, a renewables revolution, citizens income, land value tax, free child care, democratic local banking – all within our reach if we can stay organised and reaffirm our ties (and make new ones) with organisations across of the border.

We must be prepared for a UK General Election where all the “main” parties are pledging further austerity. With new tax powers a Scottish Parliament could block this to a point, but we’ll need all our momentum from this campaign to win.

Of course the election mattered. It was huge. It was amazing. It scared the crap out of UK politics. But as Danny Chivers puts most wonderfully “every day is election day”. We are not done yet.

Need some inspiration on what to do next? Here is just a smattering:

National Collective, Radical Independence and People & Planet are all hosting meetings in the next week to decide what to do from here on. Others will be too. Take the weekend off. Then get ready to get involved in something.

« Wow! And that was just the start!
Some thoughts on the independence referendum »