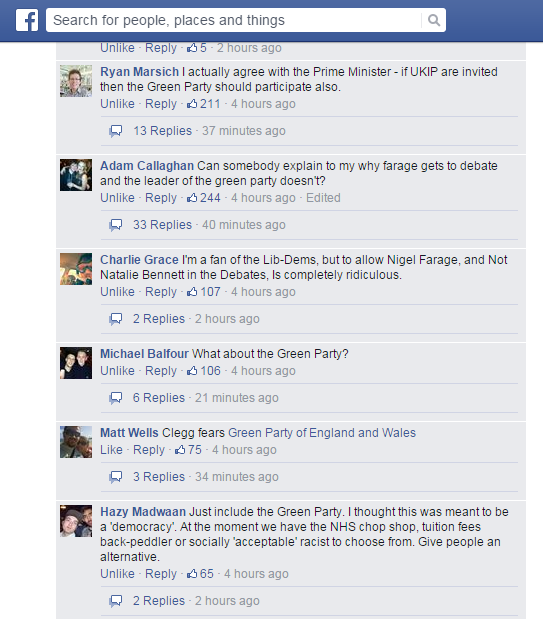 Nick Clegg appears to have suffered one of his worst social media fails since the ‘I’m Sorry’ video today, after sharing his letter to David Cameron which tried to steam-roller the PM into the TV debates while excluding the Greens.

The letter refers to Ofcom’s (preliminary) decision this week to deem UKIP a major party and not the Greens. But it was met with far more hostile comments than shares.

Clegg posted on Facebook this morning: “Ed Miliband, Nigel Farage and I have written to David Cameron saying that it would be unacceptable if the political self-interest of one party leader were to deny the British public the opportunity to see leaders debate in public. If he is unwilling to reconsider, we will urge broadcasters to go ahead with the debates without him. Share if you agree.”

While attracting just a few hundred likes and around 200 shares (out of 90,000 page likes), the more than 300 comments almost entirely slammed Clegg for keeping out the Greens from the debates.

Of course, his point about that “it would be unacceptable if the political self-interest of one party leader were to deny the British public the opportunity to see leaders debate in public” seems to entirely sum up Clegg’s (and for that matter, Farage’s and Miliband’s) approach – using electoral self-interest (‘splitting’ some so-called ‘progressive’ vote) to keep Natalie Bennett off the screens.

Examples of the almost unanimously pro-Green responses include:

“I actually agree with the Prime Minister – if UKIP are invited then the Green Party should participate also.” – 211 likes

” I’m a fan of the Lib-Dems, but to allow Nigel Farage, and Not Natalie Bennett in the Debates, Is completely ridiculous.” – 107 likes

Others were more to the point: “What about the Green Party?” – 106 likes

Bright Green’s own Adam Ramsay added the following: “Come on Nick, if you said that the Greens should be there, then they’d have to be invited and Cameron would have to join the debate. Is it just that you’re scared Natalie Bennett would show you up?”

Looks like this cynical move by Clegg has backfired, then. With Green Party membership set to overtake UKIP’s within a week – and the Lib Dems’ before the General Election, how long can the main party leaders keep this farce up for?

UPDATE: The social media fail appears to be contagious – this afternoon it spread to the Labour Party who posted their own ’empty podium’ graphic…only to be met with dozens of angry comments from the public supporting the Greens. 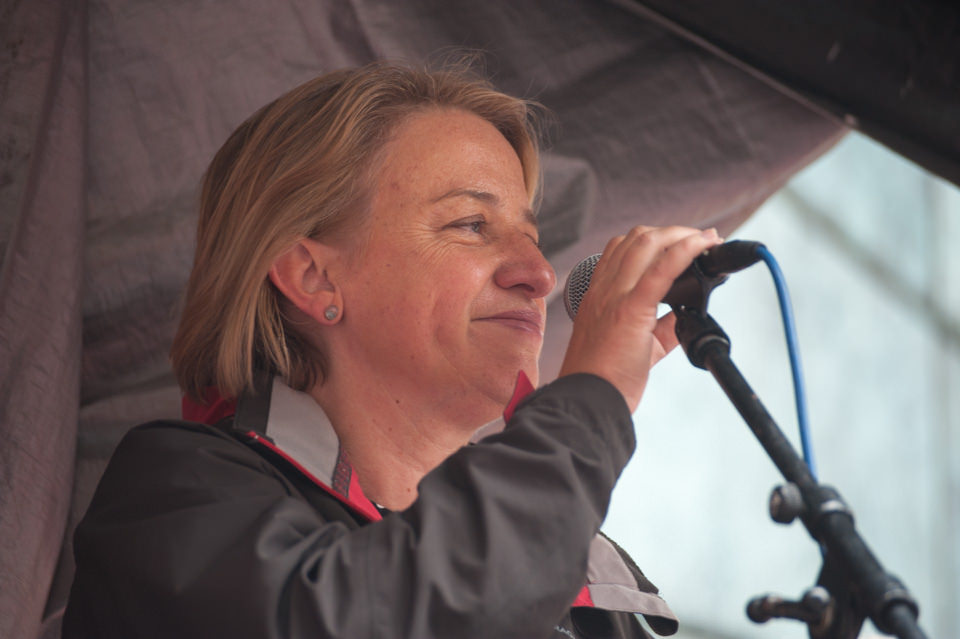 Natalie Bennett on her proudest achievements, progressive alliances and the future of the Green Party 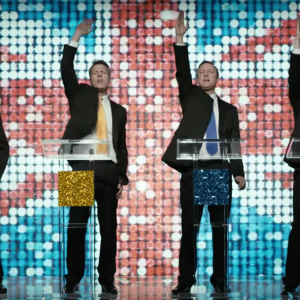 The BBC has a Green blind spot

‘What are you afraid of boys?’ – Greens step up TV debate campaign