Total UK green party membership has just passed that of the Liberal Democrats.

With UK-wide membership at 44,713 the announcement means that together Greens are now the 4th largest party in the UK, behind only Labour, the Conservatives and the SNP.

Anti-austerity parties have seen a surge in membership in the last six months with the SNP also seeing huge growth in support. 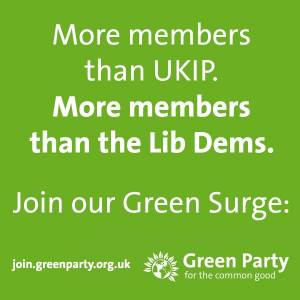 UK-wide Green party membership overtook that of UKIP yesterday with more than 2,000 people joining in the space of just 24 hours.

Yesterday a story broken by website Open Democracy received widespread press coverage in claiming that Green membership would overtake UKIP and the Lib Dems within a week.  These milestones were in fact passed in one day.