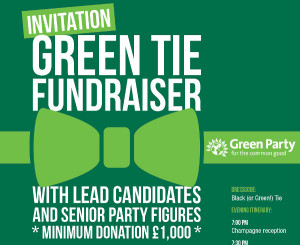 The Green Party of England and Wales has cancelled its controversial £500-a-head black tie dinner following an angry response led by Young Greens.

The event would have seen donors give £1,000 to enable themselves and a guest to attend.  It has been replaced with an event with tickets distributed by ‘lottery’ to all donors.

Over a hundred activists signed a Young Greens petition calling for the “Green Tie Fundraiser” to be cancelled. The Young Greens Co-chairs and party members from across England & Wales signed a letter saying: “To hold an event explicitly open only to the wealthy, and to offer access to the party’s leadership at a price, is a betrayal of [our] values.”

All donors will now have an equal chance of attending a meal with the leadership – regardless of how much they donate to the recent ‘Breakthrough Appeal’.  Responding to comments on a post about donating to the party on Facebook, the Greens said last night: “Everyone who gives to the breakthrough appeal will be put into a lottery for one of the 150 tickets to the old Green tie event – now the Wear Something Green Gala Thank You Dinner’ – equal opportunities for all!”

Green Party members became angry about the event after the website Political Scrapbook revealed that a £1,000 per head ‘green tie’ event was being planned at a luxury hotel in London at the end of the month with access to leadership figures.

The event cost twice as much as the Conservatives’ recent black tie dinner, a fact which caused national outrage and threats of resignations if the event went ahead as planned.  The news was also picked up by the Independent and Morning Star.

“I’m incredibly glad that the party has decided to make this change. The original event was a clear error of judgement, and for it to have gone ahead would not have been acceptable.

“However, the fast and positive reaction to complaints from members is really gratifying. It shows that the party is still very much a grassroots one, held accountable to its members.”

Supporters responded positively, with one saying “This is why I love the Green Party. They admit when they’re wrong, listen to their members and make change for good.”

In a statement seen by Bright Green, the party said:

“We are currently conducting a wide range of fundraising activities across our membership and supporters involving a variety of crowdfunding, appeals and events. As part of this basket of events we planned to hold a Green Tie dinner event for donors. After feedback from our membership, supporters and donors, the Green Party Executive decided not proceed with this event.  Instead there will be equal opportunity for all donors of the Breakthrough Appeal(1) to be one of 150 who will join our leadership and candidates for a ‘Wear Something Green thank you event’.

The ‘Wearing Something Green thank you event’ will be held on the 28th of March in London (venue to be confirmed).

We hope that our membership sees this as a Green approach to a sustainable future. Further comments will be welcome from all those who support the Green Party, and will be considered to help instruct our approach to fundraising.

•’Give Everyone a chance to Vote Green’ National Party Crowdfunder

Could this set a precedent for the party to stick to democratic methods of fundraising?