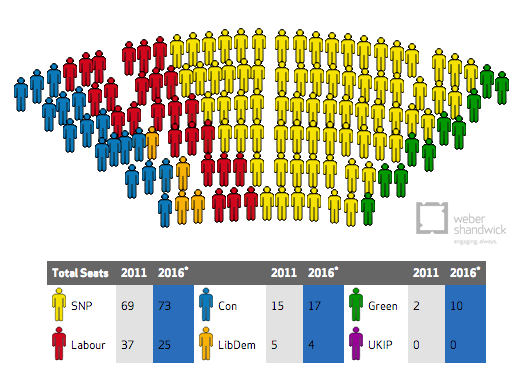 According to a new poll, the Scottish Green Party could win 10 seats in Holyrood next year, with the SNP achieving a greater majority than they did in 2011.

The TNS poll, which sampled 1031 adults aged 16+ throughout Scotland over the period 13-30 May, found that 10% of people in Scotland intended to vote for the Greens on the regional list vote, up from 4% in 2011. This would result in 10 Green MSPs, as shown in the graphic above (from ScotlandVotes.com). The list vote had the SNP at 50%, followed by Labour at 19%, the Conservatives at 14%, the Liberal Democrats at 5%, and UKIP at 2%.

Overall, these figures would result in 73 SNP MSPs, 25 from Labour, 17 Conservatives, 10 Greens and 4 Liberal Democrats.

Last month’s Westminster election shows the dangers of over-reliance on pre-election polling, and it is important to remember that the only poll that matters will be the one on election day (in this case, Thursday, 5 May 2016). With that in mind, this poll shows that Greens can do very well in Scotland next year, and increase their representation in Holyrood to unprecedented levels. This will allow them to hold the SNP to account, and act as a voice for a greener, fairer Scotland.

« Sian Berry: ‘We’ve reached crisis point in London and we need a different approach that is both credible and radical’
Why Greens should support left-wing candidates and campaigns in other parties »