The figures obtained by Bright Green show that Jonathan Bartley and Caroline Lucas won with 86% of the vote, securing a clear victory in the first round with 13,570 votes.

Yorkshire-based film-maker David Malone came 2nd with 956 votes – revealing the scale of Bartley and Lucas’ landslide victory, with the pair’s nearest competitor getting under a thousand votes.

Cllr David Williams came third with 527 votes, while Green Party founding member Clive Lord won just 173 votes – a sign of how far the party has shifted in recent years given his environmental platform. 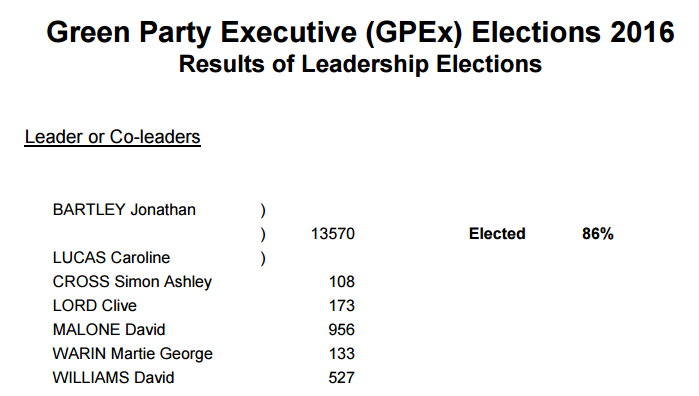 In the Deputy Leadership race, Amelia Womack won the election, securing 4,742 of first preference votes in the first round, before winning 53% in the third round when preferences were re-distributed under the Alternative Vote ballot.

Alan Borgars and Storm Poorun were then eliminated, followed by Daniella Radice, leading Womack to win 53% in the third and final round – 6,061 votes to 2,308 for Andrew Cooper and 2,240 for Shahrar Ali.

Bright Green will be covering the rest of the conference over the weekend – including the full results and breakdown of the Green Party Executive vote.

« Caroline Lucas and Jonathan Bartley’s speeches in full
‘We are the opposition’ after Brexit: Amelia Womack’s re-election speech in full »