Jeremy Corbyn’s leadership of the Labour Party has opened up the imagination of the British public: after decades of politicians on the left and right claiming that globalisation has changed the world and limited the scope of pragmatic socialism, the British people are now beginning to believe that a better Britain is actually possible, and can be won.

Many look back to the 1950s and 60’s as a time when the British economy was more fair and efficient. For a few decades after WW II we managed to have a much more egalitarian economy than we do today, with lower levels of unemployment (steady at around 2% of the working populace) and ambitious public services.

Today, ambitious public services could mean a national education service, providing lifelong education opportunities for Britain’s adult population. It could mean publicly owned taxi companies, or community owned energy. But we should also exceed it, ensuring those who are unemployed have the option of a guaranteed minimum wage job, and/or paid training with a better job guaranteed at the end. An egalitarian economy today may mean copying the Czech Republic, Finland, or Norway. These countries lead the world in equality. In these countries the top 10% of the society earn around 6x as much as the bottom 10%. In Britain today our top 10% earn 14x as much as the bottom 10%.

Many in the Labour Party point to the European social democracy example that these kind of things are possible, but in fact social democracy on the continent falls short of what Britain had in the 1960’s. Many European countries are egalitarian, and have strong public services, but they are rarely ambitious and innovative. Unemployment is an issue too: 4% in Denmark and Norway, 5% in Germany, 7% in Sweden and Portugal, 8% in Finland and 11% in France. Europe is thus not a great example of what we want: they are doing better than us today, but worse than what Britain has had before.

The Labour Party is still in flux, without a clear consensus on economics and the ambition of our public programmes. The most comprehensive vision of our economic program so far comes from the 2017 manifesto, which laid out our plans for increased taxation on the rich to finance better public services, and to spent slightly more than we tax, dedicating that extra money to infrastructure projects. Some have called this a return to ‘Old Labour’ economics, and in many ways it is. But what the program lacks is a clear plan to deal with the problem of globalisation: the world has changed since the 1960s.

Economically there have been two big changes; firstly the post-war era saw unusually high rates of growth due to the rebuilding effort after the war. This boom is no longer happening and growth has slowed down. Secondly, up until the 1970’s many international businesses had a strong bias towards the western world and were willing to invest here even when better rates were offered abroad. Since then this bias has declined and it is now significantly harder to attract foreign investment. What this means is that simply emulating the economics of Old Labour will not generate the same results it once did. We need a new economic paradigm.

Old Labour’s economics was largely based on the work of John Maynard Keynes, who many consider the greatest progressive economist of the 20th century. He published his main work during the Great Depression of the 1930s, and many of his ideas were incorporated into the post-war model across the West. However, before his ideas were translated into mainstream politics they were significantly diluted. When his work was first published many of his ideas were liked by the rich businesses elite of the day, but others were seen as a significant threat to the profits of the rich. It was not until his ideas were dissected and modified by the right-wing, particularly the economist Paul Samuelson, that they were finally accepted. Samuelson cut out the most radical bits of Keynes’ theory, and attempted to combine the rest with the existing right-wing dogma, creating what is now called ‘Neo-Keynesian economics’ or the ‘Keynesian synthesis’. This is the economics that Old Labour used in the post-war era, a more progressive economics than had come before it, but deliberately built to ignore economic ideas that the rich found uncomfortable.

Today the more radical ideas of Keynes have been combined with similar ideas from other economists to form what is called ‘Post-Keynesian economics’. A key insight of this economics is the ability to deal with capital flight and thrive when private investment is too low. In Old Labour’s economics the risk of capital flight set the limits of what was possible. A nation could raise taxes to finance public services, to redistribute from rich to poor, and create jobs, but only to the extent that private investors were willing to accommodate. Raise taxes too much and investors would leave, damaging the economy. This is why Old Labour’s economics ultimately fell apart in the 1970’s: more businesses wanted to pull out of Britain and invest in the developing world. Callaghan came head-to-head with this problem, realised that Labour’s economic approach was no longer working, and decided he had to shrink Labour’s socialist ambitions to attract more foreign investors to Britain. This decision was continued by Blair who tried to shift the Labour Party firmly away from socialism to a more ‘moderate’ position that he believed was necessary to attract foreign investors.

Post-Keynesian economics highlights that the government can in fact act as a substitute for private investors. Recognising that modern governments need not be dependent on private investors, but can produce their own money and invest it to the grow the economy without fear of inflation (so long as the money goes towards productive ventures) has revolutionary potential. This is the economics that Labour needs to achieve the growing vision of the British people. With this understanding of the capacity of modern governments we can push our economy beyond what the mainstream considers possible. We can demand greater equality and better public services. When this leads to capital flight it not need mean a loss of jobs: the government can step in, replacing the private investment with its own money, protecting our jobs, and ensuring full employment, regardless of what private investors do.

This is the economics for a modern left-wing movement, to build the future society we deserve. 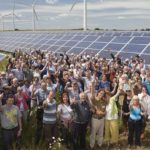 How to be a climate activist with your money