In 2020, London will go to the polls to elect a new Mayor and members of the London Assembly. The London Green Party are now in the process of selecting their candidates for those elections. Bright Green is offering every candidate seeking selection an opportunity to tell our readers why they should be selected. One of these candidates is Kirsten de Keyser, who has the following to say:

Reading through all the Green candidates’ pitches for the 2020 GLA elections, it struck me that they  all sound strikingly similar; protect the environment, build more houses, stop knife crime, clean up the air we breathe.

All totally laudable, of course, but few political parties would disagree with any of that, including Labour, Tory, LibDem, UKIP and those of no discernible persuasion. It’s called logic. As the late Labour MP Jo Cox so memorably quoted in her maiden speech to the House of Commons: “We have more in common than that which divides us”.

So I decided that it would be a waste of both my writing time and your reading time to repeat this exercise. Instead, I turned to what it is that actually divides us. What sets us apart from the rest? Why are we members of the Green Party?

The case for the Greens

I’ve been around the political block a few times. Cutting my teeth in the Labour Party back in the day, leaving at the outbreak of the Iraq War. Jumping on the LibDem bandwagon, elated at the prospect of free tuition for all. Disillusioned, I spent time in the political wilderness, before finally landing at the Green Party door in 2014.

So what made me join the Green Party? What did I hope the party could achieve, despite our broken electoral system, which practically guarantees that we won’t be seeing a Green government anytime soon? As one senior Green politician said to me at the time, “no career politician joins the Green Party”.

She totally nailed it. And that is, of course, also the whole point! In the Green Party we’re not shackled to some historic tribal Totem Pole, flames licking at our feet if we don’t toe the party line, whatever we might think ourselves.

Green Party people are pioneers, unafraid of telling tomorrow’s truths to power, unworried about losing votes and seats (well, almost). Green Party people shape the future debate, why else would every other party now be shouting the messages the Green Party put out there twenty years ago? Come 2035, everyone will be campaigning on the 2015 Green Party manifesto!

So rather than trying to sell ourselves on any one specific set of pledges, our Green overarching commitment must be to promote a common mindset that will bring about the kind of society we all want to see. However we manage to achieve this.

Green Party people must be prepared to walk alongside anyone who agrees with us, whatever their political colour. The Green Party must be at the strategic centre of the political debate, not merely shouting angrily from the sidelines.

That does not mean adopting other political allegiances wholesale. It does mean being brave enough to engage in grown-up politics. Evidence based, results driven politics. A politics that achieves progress, unravels seemingly hopeless gridlocks, lets in some fresh air, regardless of who opened the window.

It does mean having the humility to listen, and listen carefully to those with whom we disagree. Let’s recall the famous phrase “I disapprove of what you say, but I will defend to the death your right to say it”. Let’s take that with us in any debate we enter into.

When arguing for more cycle paths, look across the table at the motorists and understand their concerns. When faced with a bunch of NIMBYS, let’s step into their slippers for a day. When considering a move to punish teenagers for carrying knives, dwell for a moment on the kid, who is petrified of walking to school without being armed.

In other words, let’s lock away the adversarial and unlock collaboration instead.

That also means transparency. Backroom deals, dirty money, cash for questions, gongs for cash, family favours – none of those has a place in a modern, enlightened political system. Green Party People must expose such corruption – for that is what it is – wherever they find it, including within our own ranks.

The other side of this coin is, of course, the honest politician, dedicated to improving life for all in society. And yes, they do exist. In every party. And they are the ones Green Party people must work with, must help and encourage. Let’s end the gesture politics of lambasting anyone with a different colour rosette, whatever their viewpoint.

Thankfully, our elected politicians already do a lot of that now, but the whole Green Party needs to get with the programme. Campaigners, activists and candidates alike.

The importance of empathy

The umbrella for it all is one shaped by empathy. Empathy should be the bedrock for the entire Green edifice. Think about it. If everything we do takes as its starting point ‘the common good’, that means the best result we can achieve for everyone, whatever their political persuasion.

Of course, in the real world, this means ‘the greatest benefit for the greatest number of people’. That’s just life. What is important is that it is what drives us. Always consider the people across the negotiating table. What’s in it for them? It’ll make us much better politicians.

So let’s start now to reinvent our broken politics. Constant warring, heckling, abusing and accusing have driven the positive out of politics. But no one wants to spend their life doing politics only to make things worse. Politics should be exciting, fun, celebratory!

So, as we embark on another round of elections for this and that Parliament, Assembly or Council, as a candidate I will be standing on a platform of lots of hugging. You have been warned.

Kirsten de Keyser is a Green Party activist based in Camden. In 2018, Keyser was selected to fight the seat of Holborn & St Pancras in the event of an early general election, and narrowly missed out on being elected as a Highgate councillor in May of that year, losing by just 200 votes. 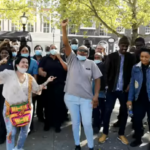 We have to stand with care workers fighting for justice 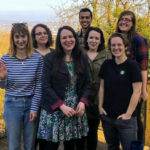 Sheffield, Scotland and Sultans – UK Green news round up week 14