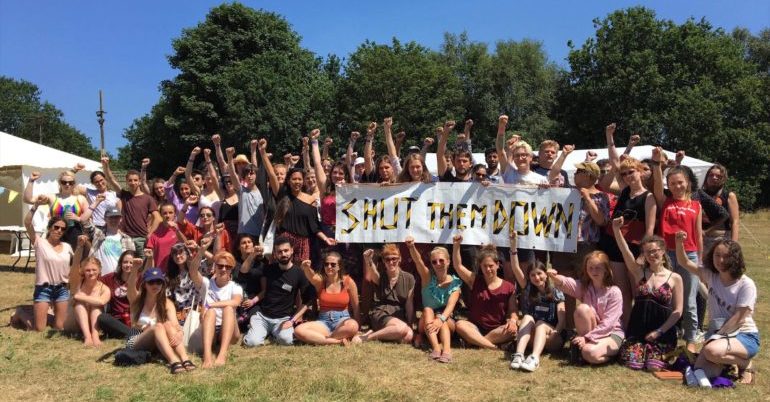 Tents, students, vegan food and (hopefully) sun. You could be forgiven for thinking this was a budget Glastonbury with a political edge, but that’s where the similarities end. People & Planet’s annual 5 day residential summer gathering is opening up radical possibilities.

Some attendees come with their university’s People & Planet group, but many come alone, inspired by the actions of the network across the UK and determined to build a group and start a campaign for social environmental justice. Power Shift provides an entrance point to a supportive community, where participants meet others like them from all over the country (and further afield) and learn from their collective experience. Additionally there is dedicated time built into the event to get stuck into organising regionally, keeping People & Planet’s work geographically relevant to students wherever they’re based.

Through People & Planet’s focus on movement building, a fundamental aspect of the event is ensuring participants leave feel empowered to build new groups, strengthen existing ones, and work with other groups where affinity exists. We’re stronger together, and workshops on collective care, student-staff solidarity and working with students’ unions ensure we’re never alone in our struggles for a more just world. Each year we see Freshers’ Fairs across the UK host vibrant People & Planet society stalls, ready and waiting to take in keen campaigners. We round this off by taking action on the Sunday, together, and in solidarity with those most affected. (The action is a surprise, but will be in central London, so keep your eyes peeled!)

The biggest benefit of 5 days together, aside from the amazing connections made and friendships built, is the time available to comprehensively cover all the skills needed to see a campaign from launch to victory. After Power Shift the new academic year always sees an array of new campaigns on campuses across the UK spring into action. If you’ve never campaigned before, you will leave feeling empowered to make change happen, not just ask for it. 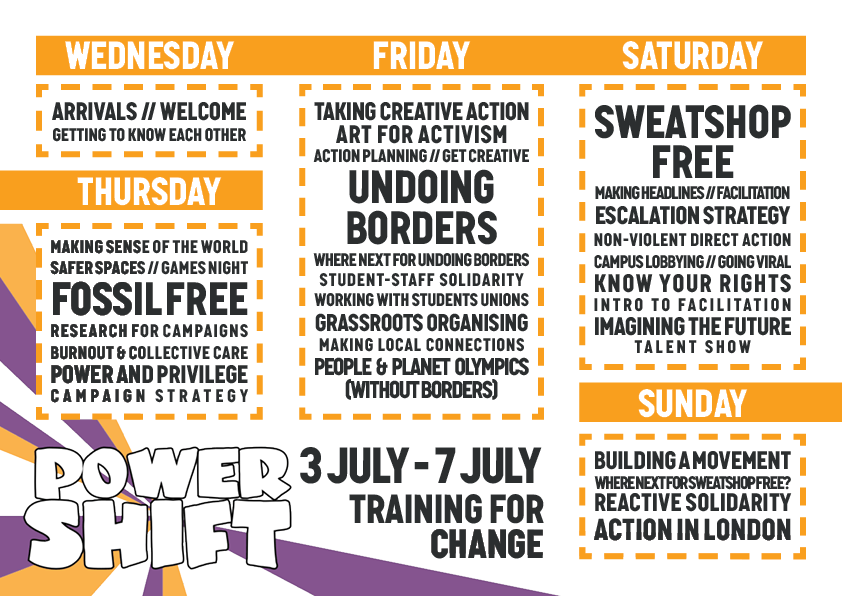 Learning from each other

Though Power Shift is deliberately crafted to be accessible for total beginners, many participants have a wealth of experience to share. From our student trustees, regional organisers and the volunteers that help us run Power Shift smoothly, the collective knowledge at the event is rich and plentiful. There will be workshops facilitated by students past and present, and regional planning organised by experienced network members. We know everyone brings their own experiences to this gathering, and everyone has something to share that others can learn from.

In a time where significant chunks of the UK population and British state are seeking to pull up the drawbridge and retreat into an increasing state of isolation, People & Planet is doing the opposite. Not only do its campaigns centre internationalism in the context of workers rights, the climate crisis and migrant solidarity, but their annual summer gathering Power Shift is bringing together activists from close to home, and further afield.

Brexit may be drawing on in the parliamentary circus, but friends and comrades from People & Planet’s inspiring sibling, the All Ireland Student Activist Network are showing up in force, and hopefully bringing a healthy dose of music, good craic and familiar faces. For the second year running, partner organisations in the MakeICTFair project are joining the 5 day residential, with organisers from SETEM (Catalunya), CATAPA (Belgium), CEE Bankwatch Network (Bulgaria) and Le Monde Diplomatique (Poland), to continue working against human and labour rights abuses in the global ICT supply chain, in which People & Planet run the Sweatshop Free campaign.

To hear more about People & Planet’s work, sign up to our mailing list, and to give us the freedom to work on radical student action without restriction, consider donating to keep us independent.

Power Shift 2019 is now sold out, but there is a waiting list you can sign up to, or join us in August for our residential Regional Organiser training.