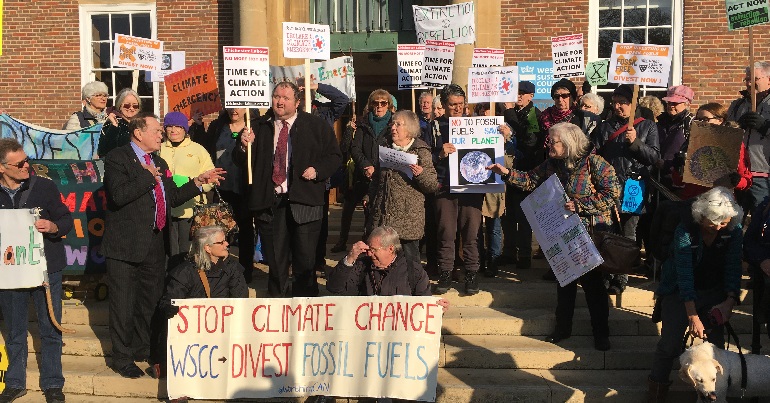 As concern grows everywhere about the impact of climate change, councils are beginning to stir into action. Climate emergencies are being declared, climate pledges are being taken, solar panels are being slapped onto new houses and fleets of electric busses are starting to appear in cities. But alongside these gestures and public statements of intent, some of those very same councils are quietly investing millions of pounds into fossil fuel companies through their pension funds.

Nottinghamshire County Council for instance has invested more than £350million into companies such as Shell, BP and ExxonMobil. That’s nearly seven per cent of its pension fund in fossil fuels all while those electric buses carry people around Nottingham in an attempt to become the UK’s first carbon neutral city by 2028.

Meanwhile on the south coast, West Sussex County Council is busy installing solar panels onto schools and houses and fitting environmentally friendly lightbulbs into council offices and streetlights across the county. In April this year councillors pledged to take action on climate change and committed to working towards a carbon neutral council.

I am really proud that we are leading by example in this area, by improving the efficiency of our buildings and investing in energy projects.

But campaigners point out that while this is going on West Sussex County Council’s pension fund is actually increasing its investment in fossil fuels. Worthing Climate Action Network (WCAN) was founded in early 2016 to campaign “to get West Sussex County Council to divest the pension fund from fossil fuels,” says WCAN member, Emma Cameron. “At that time the amount invested was around £100 million. It is now approximately £200 million.”

In August this year it was revealed the council’s pension fund had more than £170 million invested in the fossil fuels industry including £32 million in BP and £20.6 million in Shell. It was also revealed £2.7 million has been invested in weapons manufacturing company BAE Systems.

Despite WCAN organising a petition which sparked a council debate on the issue in November 2017, numerous letters, a demonstration and a ‘die-in’ earlier in 2019, the council’s position has not changed. According to Cameron:

WSCC has responded repeatedly with the line that they ‘have a duty to obtain the best possible return on the investments of the Pension Fund’ – this despite the fact that they say they have signed up the Statement of Investment Principles, which are intended to take social and environmental and governmental issues into account.

To date as far as we are aware they have not divested one pound of dirty money.

In West Sussex like many areas of the country most people are simply unaware of the level of investment of public money into the fossil fuel industry. WCAN member and environmental consultant Michelle Furtado, says that when she campaigns to raise awareness of the issue she commonly finds that “most people have no idea that either West Sussex County Council or other pension funds are funding climate change. It’s madness,” and when they do find out “most people agree with us.”

The West Sussex County Council Pensions Panel is mindful of its legal duty to obtain the best-possible return on the investments of the Pension Fund it administers on behalf of numerous employers, consistent with an appropriate risk level.

Pension Fund equity and bond portfolios are managed by two managers on a fully discretionary basis. Both managers are considered stock pickers which means that each stock (whether held or not by the portfolio) is evaluated on an individual basis.

As a result, the precise choice of investment may be influenced by wider social, ethical or environmental considerations and these factors will form part of the assessment and monitoring of investments by the managers.

Whilst the managers have not been instructed to restrict investment in certain stocks, as a long-term investor the managers will need to demonstrate that they have invested in companies that are financially and environmentally sustainable, provide financial benefit and the companies adopt the high standards of governance. At the end of March, 2019, less than 4% of the fund’s assets were invested in fossil fuel companies.

My feeling is that it’s all very well for West Sussex County Council leadership to accept that we need to respond to the climate emergency but it has to be consistently applied, and that isn’t happening at the moment. It is exhorting residents to do their bit, but they are reluctant to apply this to the pension fund investments.
Given the strength of local feeling demonstrated, divesting their assets from fossil fuel companies should have happened. Instead, to my knowledge, despite being raised by myself at the Panel’s AGM, nothing has been done. I don’t feel that is good enough and I think there are many residents out there and pension scheme members who would agree with me.

A report co-authored by Friends of the Earth and Platform found that more than £16 billion of public money was invested in the fossil fuel industry in 2017. There are some councils that are beginning to wake up to this issue. Swansea council, for instance announced in July it would be moving almost a quarter of its investment portfolio into low-carbon investment funds, and in July Cardiff council announced its pension fund would be divesting from fossil fuels.

But many, like West Sussex, have a long way to go. While climate pledges and low energy lightbulbs are a start, against a backdrop of the  millions invested into the very industries responsible for climate change they can look like little more than hollow gestures. Michelle Furtado says Worthing Can are committed to keep raising awareness and campaigning on the issue. “Worthing CAN will continue to put pressure on WSCC to divest, until they actually do.”

Natalie is a freelance journalist with a background in social anthropology. Her work on the impact of austerity has been published by Novara Media, The Sun Online, and Welfare Weekly, among others. Twitter: @NatalieLeal_
View all posts by Natalie Leal →