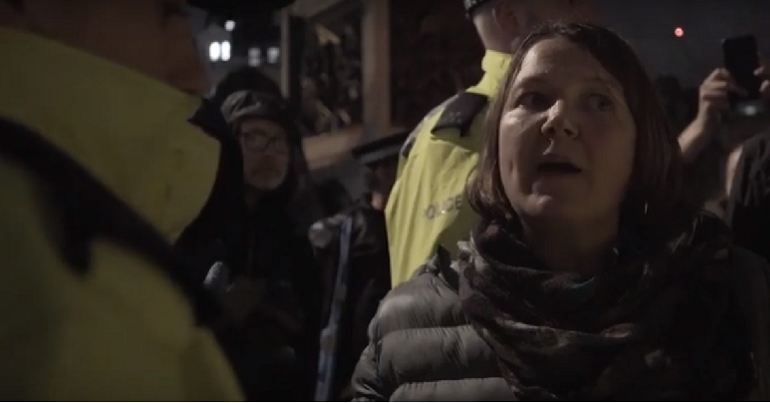 On the evening of Monday October 14 I was arrested in Trafalgar Square, while defending the right of Extinction Rebellion to peaceful assembly and public protest.

I happened to be in London – at a meeting of all the Greens/EFA MEPs from across Europe – when I heard at around 8.30pm that the Metropolitan Police had just announced that they would be clearing Extinction Rebellion (XR) protesters from Trafalgar Square.  I had walked past the area earlier that day and seen a perfectly peaceful protest, so this seemed to me a disproportionate action. I therefore went to Trafalgar Square with several other MEPs to find out what was going on, and to ask why.

When we entered the square we found it surrounded by police officers in hi-vis. We asked several times for an explanation, but were simply told that conditions had been extended under Section 14 of the Public Order Act, meaning that XR were now banned from assembling or protesting anywhere in London. We were shocked. The right to peaceful public protest is a cornerstone of democracy – banning it outright seemed completely draconian. We asked what justification there could be for such an extreme measure; none was forthcoming. We asked several times to speak with the commanding officer, without success. So, we moved down to stand in solidarity near the XR protesters who were being cleared away.

Standing near one of the lions on Trafalgar Square I was approached by another police officer and had the same conversation again.

Why were the protesters being cleared, I asked? They were entirely peaceful, and the square is pedestrianised.

Why had all protest about the climate crisis been banned throughout our capital city? I was warned that simply by standing in a pedestrianised public square defending the right to peaceful assembly I was in breach of the new Section 14 order.

I declined to move. This continued for a few minutes, with the police officer warning me I was liable to be arrested, and me refusing to move, continuing to defend the right to protest and question the justification for clearing the square. The officer then handcuffed me (completely unnecessarily), led me eventually to a police van (despite my offer to walk to the police station to save petrol!) and took me to Charing Cross Police Station.

There, I was held for about 5 hours, put in a cell (fairly comfortable – I was given a warm blanket), fingerprinted and photographed, and then ‘released under investigation’ at 3am. The police officers I met that night were almost all friendly and professional; I have no quarrel with them as individuals. But I am seeking judicial review of the Metropolitan Police’s decision and actions, which I believe were disproportionate.

Why this matters for democracy

The use of Section 14 in this way is an unprecedented move in policing public protests in the UK, and it is a worrying one. The right to peaceful protest is a fundamental pillar of our democracy – indeed, it is enshrined in Article 11 of the Human Rights Act. Outlawing all Extinction Rebellion – related protest across the whole of the capital city is a disproportionate response to peaceful protest. The fact that I was not even part of an Extinction Rebellion action, merely trying to defend their right to protest, is testament to the indiscriminate nature of this tactic.

The police already had extensive powers to arrest XR protestors who were actually causing disruption. They already had the power to arrest those who sat in the street, those who glued themselves to the pavement, and so on.

Of course, XR protests are disruptive. They are meant to be, to draw as much attention as possible to the climate crisis. That’s the whole point of protest: when letter-writing doesn’t secure change, people come on to the streets to demand action. There is a long and honourable tradition of ‘disruptive’ public protest: that is, after all, how women won the right to vote 100 years ago.

XR themselves have made the point that the disruption caused by their protests is minimal compared to the impact of unchecked climate chaos. In fact, I believe that those on the streets protesting about the climate crisis – XR, the school strikers – are performing a public service. Their mobilisation has helped push the climate and ecological emergency up the political agenda in an unprecedented way. They have succeeded in drawing many new people in to engagement in protest. And they’ve forced political parties to take note.

But the government’s response has been frankly shameful. The UK is off track on almost all our climate targets. There were only a few words on climate in the Queen’s Speech. In short, protest is absolutely justified, indeed necessary. The disruption that Extinction Rebellion creates will only go away if the government steps up and takes the climate emergency seriously. The solution is not policing – it’s political.

That’s why I’m proud to be one of the claimants challenging the legality of the city-wide Section 14 conditions in the High Court tomorrow, Thursday 24th October. We have a very strong case. The right to peaceful assembly and public protest must be upheld; if a government can ban such protests outright, we will be on a very dangerous path indeed.