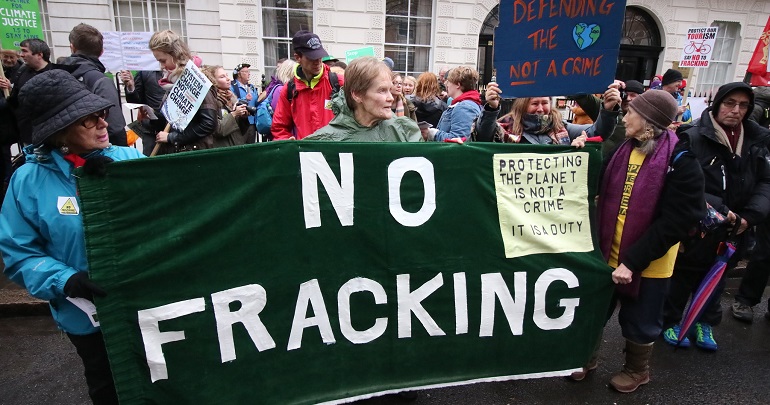 Yesterday, tens of thousands of people who’ve contributed to the anti-fracking struggle had cause to celebrate.

They woke to the news that their efforts had contributed to a big step forward in the struggle to prevent the start of a new fossil fuel industry in England (the battle having already been effectively won in Scotland and Wales).

The government had announced a moratorium on fracking.

Everyone who contributed, from those who’ve essentially put their lives on hold to live in the cold and mud and physical challenges of anti-fracking camps, those who’ve stood for days, weeks, months and years as witnesses to the resistance, to those who’ve cooked to feed those campaigners, who’ve supported them online and through social media, all have cause to celebrate – and be congratulated.

We don’t do that enough as campaigners, so let’s start there. Hugely well done!

I want to particularly congratulate the Lancashire Nanas, who’ve done so much to demonstrate that campaigning is for everyone – that wherever you are in the country, whatever your age, and often state of health, you can make a difference.

The government announcement came, as you might have expected, in a mealy-mouthed, stumbling form, referring to safety concerns and the advice of the Oil and Gas Authority, who, Andrea Leadsom told Radio 4’s Today programme “have said to us that we cannot be certain that shale gas can be extracted safely”.

But that’s hardly surprising. Even for Boris Johnson – at the head of a government that for a decade has been ignoring the obvious, no-brainier policy of pursuing energy efficiency, and the great benefits of community-owned energy in favour of talking up the failed, extremely unpopular option of fracking – to totally reverse direction in one step is a bit much.

But make no mistake, this is the end of fracking in England.

Some are saying, oh but the Tories, if they win the election, could reverse course.

Yes, that is true, but would investors really keep not only pouring good money after bad – and they have poured in many millions over a decade while failing to start a fracking industry – but also go with a government, a country, that had reverse ferreted that quickly, and could easily do so again?

No, of course this doesn’t mean the Tory Party has “got” the state of the climate emergency. And of course the timing is linked to the election – fracking is massively unpopular.

Before the government stopped publishing the reports of the public’s view of fracking, the level of people supporting it had fallen to just 13%.

There was a whole lump of the Tory Party who were campaigning hard to change their own party’s policy – the electoral sense for them was blindingly obvious.

Those facts are to the great credit of campaigners.

Greens, including MP Caroline Lucas, have been arrested at those protests, manhandled by police and shown unfailing support. (I’ve got to specially mention the indomitable, amazing Anne Power here.)

I’ve spoken at meetings and joined campaigners at would-be frackers gates from Bolsover to Chester, Ryedale to Balcombe.

I am proud of the Green leadership, but so many people, from different parties and of no party, have contributed to the anti-fracking effort.

Let’s make sure we celebrate that achievement, and send the message loud and clear, chanted as it has been so many times in so many places: “No fracking here no fracking anywhere.” (And that means in Argentina as much as the UK.)

And as for those few old-fashioned types who still like the repeat the claim, debunked now for a decade – that gas is some sort of “low-carbon” energy source – there’s just two words to say to them: “fugitive methane”.

Gas is a fossil fuel. We are in a climate emergency. It has to be removed from our energy systems as soon as possible – and we certainly should not be building any new infrastructure using it.

« For the Many, not the billionaires
The grassroots activists fighting fracking at Preston New Road »