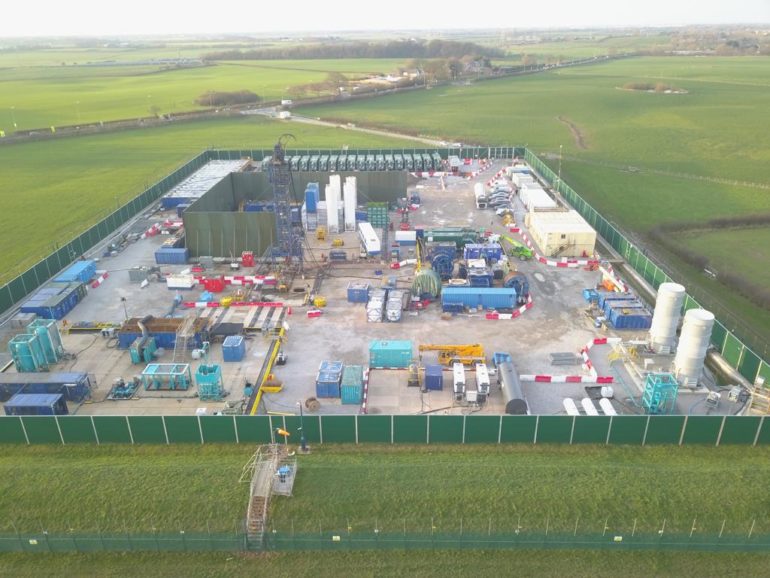 In May 2014, oil and gas exploration company Cuadrilla applied for planning permission for a shale gas exploration site at Preston New Road, Lancashire. A grassroots activist collective quickly formed in response. Preston New Road Action Group (PNRAG) opposes hydraulic fracturing – ‘fracking’ – on the Fylde Coast and across the UK. Five years on, we look at its achievements in light of the news this week that the UK government has placed a moratorium on fracking. A moratorium is a temporary suspension of activity. Not an outright ban, as is being reported in parts of the UK media.

Fracking is the process used to extract natural gas and oil from rock formations. It involves drilling deep into the ground then using water, sand and chemicals to smash the rock, forcing gas to the surface. This can cause water and air pollution, and poses health risks to site workers. Many who live nearby also are concerned for their health. Research into the health risks posed by fracking to communities living nearby is limited. Some is available from the United States, where the process was first used in 1949 to increase the flow of gas from wells in Kansas. Since 2005, more than 100,000 oil and gas wells have been drilled and fracked in the US. A 2011 report published in the Human and Ecological Risk Assessment journal investigated the potential health effects of 353 toxic chemicals used in fracking. It found that more than 75% could affect the skin, eyes and other sensory organs and the respiratory and gastrointestinal systems. Approximately 40-50% could affect the brain or nervous system, immune and cardiovascular system and the kidneys; 37% could affect the endocrine system; and 25% could cause cancer and mutations.

When Cuadrilla submitted its initial planning application, concerned residents spoke at a meeting about the issues they had identified from a community standpoint. Several people asked them to create a group, so PNRAG formed. Its core is made up of around 15 local people. They live across the Fylde Coast, some less than 500 metres from the site. PNRAG work alongside other local and national groups that are opposed to fracking. It is part of Frack Free Lancashire and has received help and support from Friends of the Earth (FoE).

In June 2014, Cuadrilla’s planning application was put out for consultation by Lancashire County Council (LCC). The initial timescale to review and comment was four weeks. Susan Holliday, chairperson for PNRAG, said:

“With help from the FoE legal team, we challenged this as unreasonable and the consultation period was extended to three months. This enabled a significantly better quality and quantity of responses to be submitted. We then met with Westby with Plumptons Parish Council and Fylde Borough Council to raise awareness of the situation and express our concerns. Both objected to Cuadrilla’s application when it went before LCC, providing us with extra support.”

In January 2015, the case went before LCC Development Committee. At Cuadrilla’s request, a decision was deferred to allow them to put forward further mitigation measures.

The meeting was reconvened in June that year. PNRAG’s key argument focused on harm to the landscape and harm caused by noise. The Development Committee was concerned that if it voted against Cuadrilla’s application and against the planning officers’ recommendation, it would be subjected to costs. The group’s barrister prepared a statement outlining that the Development Committee could make a decision different from its officers without the risk of penalties. As a result, LCC democratically refused planning permission for Cuadrilla to frack the Preston New Road site.

Cuadrilla appealed and a public inquiry took place in February and March 2016, where PNRAG was granted Rule 6 status. Susan explained:

“This put us on an equal footing with Cuadrilla and LCC. It meant that we were able to play an active part in the public inquiry and take part in the site visits. We also put a blimp in the field on site visit day to show the inspector the height that the rig would reach.”

The decision was announced by Sajid Javid, then communities secretary. In October 2016 he controversially overturned LCC’s decision and gave Cuadrilla the go-ahead for planning permission. But PNRAG believe that its participation in the inquiry meant that the conditions set for noise and the height of the rig were stricter than they might otherwise have been. PNRAG then played an active role in reviewing the conditions and plans to ensure they were as robust as possible.

Since construction of the site commenced in January 2017, the group has also participated in consultations on changes to the environmental permit and planning application.

PNRAG has been involved in the All Party Parliamentary Group (APPG) on shale gas exploration. Recently, the group challenged the approval of the frack plan for a second well.

In August 2019, the Preston New Road site was hit by several earthquakes, the largest measuring 2.9 magnitude on the Richter scale. This happened shortly after fracking at a second well began. As a result, Cuadrilla was forced to stop fracking until the Oil and Gas Authority (OGA) completed a review. But work at the site did not stop; the company was still flow testing. PNRAG continued to monitor activity at the site, raising any issues with regulators.

On 2 November 2019, the OGA’s report was published. As a result of its findings, the UK government halted fracking with immediate effect “until compelling new evidence is provided” that it may be safe. However, PNRAG understands that flow testing will continue. Susan added:

“We cautiously welcome this news of a moratorium, but a total ban would have been even more welcome. The residents of Preston New Road have suffered a great deal over the last three years since Cuadrilla began work at the site. We will only feel able to celebrate once Cuadrilla start work on decommissioning and the site is restored.

“We have said all along that we have been guinea pigs for this process. The experiment has failed just as it did in 2011 when the last moratorium was put in place; hopefully this time it will not be lifted. The tremors in August 2019 were felt by thousands of people. It should be clear from this that the Fylde Coast is not suitable for fracking. It must be a huge relief for those communities that are currently under the threat of planning applications for fracking, knowing that they will now no longer need to go through what we have.”

You can also support the group by making a donation to help cover legal funds.