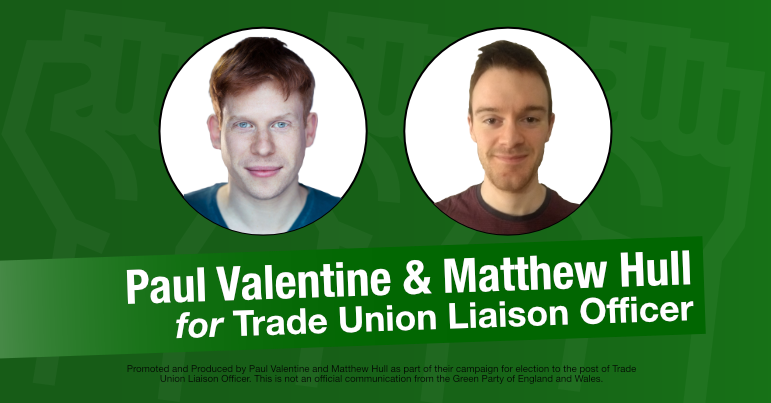 Earlier today, Sian Berry and Jonathan Bartley announced they are restanding for their positions as co-leaders. But alongside the more high profile leadership contest, Green Party of England and Wales members will this summer vote to elect new members of the Green Party Executive (GPEx).

And today, Paul Valentine and Matthew Hull have announced they are standing as a job share for the position of trade union liaison officer. Valentine has held the position on his own since 2018.

Launching their campaign, the pair have highlighted their desire to embed Green politics in the organisations and institutions of working people, arguing that grassroots worker organising is central to achieving the Green Party’s aims. They also argued that through strengthening relationships with trade unions, they would seek to overcome the party’s image as a party of and for the middle classes.

In doing so, Valentine and Hull described their desire to shift the party into supporting “militant, member-led union campaigns”, encourage members to take action alongside unions, and to empower local parties to develop meaningful relationships with trade union branches.

Speaking to Bright Green, Hull said that the Green Party must stand “shoulder to shoulder” with working people. He said:

Vibrant, grassroots worker organising is absolutely vital to achieving the Green Party’s central aims of social and environmental justice. As a party we aim to be the political arm of the environmental justice movement. We must stand shoulder to shoulder with working people and make building worker power a central pillar of Green strategy.

“I’m really excited to start putting these principles into practice alongside Paul as the party’s next Trade Union Liaison Officer on the Green Party Executive.

Valentine echoed this, calling for a strengthening of relationships between the Green Party and trade unions. He said:

Having been on GPEx as the Trade Union Liaison Officer for the past two years, I’ve been pleased with the way we’ve started to link up our Union activism on the ground, however there is much more to be done. We must continue to build links both locally and nationally with Unions to implement a worker-led green revolution.

I’m really happy that Matthew has agreed to stand alongside me in a job-share for the Trade Union Liaison Role. Together we can build the vital bridge between workers, the Trade Union movement, and the Green Party.

Valentine – alongside currently serving on GPEx – is an actor, having appeared in stage adaptations of Wuthering Heights, Cranford and The Merry Wives of Windsor. He also holds a series of roles within trade unions. He is currently the Young Members Councillor of Equity – the creative workers’ union, as well as Chair of the PCS Branch at Southbank Centre.

Meanwhile, Hull has sat on the Young Greens executive committee since 2019, and has been co-chair of the London Young Greens from 2019 to 2020. He works in development and campaigns, and is a workplace representative in Unite the Union’s Community, Youth Workers, and Not for Profit industrial sector.

As of yet, Valentine and Hull are the only candidates to emerge for the position of trade union liaison officer. However, a number of other people have announced their candidacy for other positions on GPEx. In addition to Berry and Bartley restanding for the co-leadership, the following candidates have been announced:

In total, 11 positions are up for election this year. They are:

45,000 sign Enough is Enough pledge to defend the right to strike

« Jonathan Bartley and Sian Berry to restand as Green Party co-leaders
Care home privatisation: the destruction of what the NHS built »