Since 1889, May 1st has been recognised as International Workers’ Day, a time to celebrate all the moments workers have come together and fought for a better world. To mark the occasion, here is a list of five times workers have organised to fight for both people and planet.

Within the Peak District, amongst the many moorland hills, Kinder Scout stands above all others. The highest point in the District, as well as Derbyshire and the East Midlands, this moor is a famous walking landmark within the National Park. Yet Kinder Scout was not always accessible to the walking public, in fact the very opposite was true, with local landlords and grouse shooters often chasing off and complaining about the working-class ramblers who would visit.

In response to a group of young walkers being expelled from the moor just north of Kinder Scout, members of the British Workers’ Sports Federation and the Youth Communist League organised hundreds of ramblers to trespass on Kinder Scout on 24th April 1932. The action saw several ramblers arrested, but massively raised public awareness around access to the countryside and walking. Many view the trespass as a crucial moment in the debates around access to the countryside, leading to the creation of the Peak District National Park.

You can read in more detail about the Trespass in this piece from Marcus Barnett in Tribune.

Down in Australia, post-World War Two New South Wales had seen two and a half decades of property boom, with developmers increasingly replacing older buildings and destroying green spaces. At the same time, workers within the Builders Labourers Federation (BLF) were becoming increasingly militant and concerned about the damage these new builds were causing.

When local residents opposed to new building works approached BLF members, the workers sided with the wider community and refused to work on the offending sites. Over time this tactic came to be known as a green ban, where workers refused to support and work on projects which damaged the local environment, destroyed affordable housing, and removed important aspects of the local heritage.

When Jack Mundey, the pioneering trade unionist who helped test this tactic, was pushed out of the BLF by other officials, the union came under further attack from developers and the government, which effectively stopped the tactic’s further use. Despite their heyday being only brief, the green bans protected many of New South Wales’ community and green spaces, completely changing the area for the better.

In Tribune, Chloe Koffman has written a much more detailed account of the green bans.

In the 1970s, the Lucas Aerospace Corporation, which produced components for commercial aviation and military industries in the UK, announced that thousands of workers were going to lose their jobs. In response to the proposed job losses, shop stewards published an alternative plan to save jobs in January 1976.

Rather than continue to produce aerospace and military products, the workers argued, in detail, for their ability to produce socially useful products. Far ahead of its time, the Lucas Plan proposed workers would create hybrid vehicles, wind turbines, and more technologies which we now know are crucial in the fight against climate change.

Their fight, albeit unsuccessful, not only represented an early example of the just transition, but also inspired contemporary struggles like that at Harland and Wolff shipyard in Belfast. Here, rather than accept the closure of the yard in 2019, workers occupied it, and successfully prevented its closure.

Dave King has written about the enduring importance of the Lucas Plan for Science for the People. Similarly The Plan That Came from the Bottom up is a video essay discussing the Plan and its contemporary importance.

The Movimento dos Trabalhadores Sem Terra (MST), is the landless workers movement in Brazil, a mass member organisation fighting for the rights of those without land and the wider rural poor. Founded in January 1984 at a conference of landless workers, it marked an uptick in the organisation of those fighting for a transformation in land ownership. Predominantely through the tactic of occupying land, MST has spent the over 30 years since campaigning for the interests of land workers.

As land ownership in Brazil has become increasingly concentrated, and a rising number of people are camping on occupied lands, the MST has become a crucial radical force within Brazilian politics. Today, it has become the largest social movement in Latin America’s history, fighting for more than just land rights, including struggling against multinational polluters.

Wendy Wolford and Judite Stronzake have written a summary of MST’s organising for Dissent.

Earth First! emerged in the 1980s as a network of environmentalists willing to engage in direct action to prevent environmental damage from logging, construction, and other polluting activities. From spiking trees to chaining themselves to bulldozers, Earth First! emerged as an international network inspired by the ideas of Deep Ecologists and ‘ecocentric’ thinkers.

In the late 1980s Judi Bari, alongside other Earth First! organisers in California, began building relationships with the Industrial Workers of the World (IWW), a union she was also an organiser within. While the relationship between local loggers and environmentalists in California were extremely fraught, this worker-environmentalist relationship building represented a new challenging alliance for commercial logging interests and the US government.

As a result, the 1990s saw extreme state repression of Earth First! organisers, including a bombing on Judi Bari, the culprits of which have never been caught. You can read more about the relationship between Earth First and the IWW in this narrative of Bari’s life, and in the documentary ‘Who Bombed Judi Bari?’ 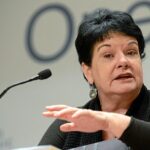 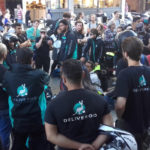 Resisting exploitation and building power: the Deliveroo workers fighting back