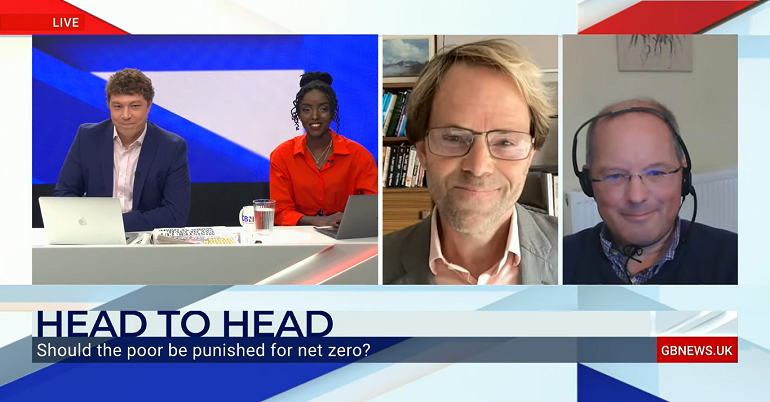 I was astonished and dismayed to come across a debate on GB News between Rupert Read and the ‘Global Warming Policy Foundation’s’ (GWPF) Andrew Montford; the debate was entitled ‘Should the poor be punished for net zero?’. This appalling assumption, pushed by the biased agenda of GB News, that the working poor in this country will be the ones left out of pocket due to their allegedly being the ones who must pay to deal with the climate crisis is absolutely absurd and quite horrifying.

The climate crisis in particular is centered upon sectors absolutely vital to working-class life — food, energy, transport. The goal should be to use this declared emergency, declared by the Intergovernmental Panel on Climate Change and our very own Parliament, to build a movement to take these critical sectors under public ownership to at once decarbonise and decommodify them.

The emergent politics of the Green New Deal does exactly this. It not only offers a solution at the scale of the problem — aiming to revolutionise the energy and economic system — but also offers clear and direct benefits to the mass of the working class (e.g: new green jobs, apprenticeships and skills).

During the debate on GB News, Andrew Montford argues that the costs to the poor will be “four to five times higher” than £30,000 per household, trying to put fear into working people’s heads that this is something they will have to pay either directly or through taxes and suggests “you can’t shift the cost from the poor to the rich.”

He also goes on to reel off the lists of costs; heat pumps costing £10-12,000 per household, £20/30/40,000 costs of insulation, electric vehicles that are £10,000 more expensive. He argues that you “can’t get away from these costs”. These are scare tactics to prevent the working poor from supporting the measures needed to ensure; all of our, the planet’s and particularly their own survival and well-being.

Rupert Read expertly countered some of his claims by suggesting that it should be the fossil fuel companies that fund the transition to net zero carbon, not the poor. He also accused the think tank that Andrew Montford works for, the GWPF – which has repeatedly faced allegations that it denies climate change – of being funded by the rich and questioned whether it was “quite possibly” funded by fossil fuel companies.

Alongside this debate, I have begun reading Ken Stanley Robinson’s brilliant novel ‘Ministry for the Future’. The book is set in the not too distant future and describes such characters as Andrew Montford:

People had caused the heatwave, and not all people – the prosperous nations, sure, the old empires, sure; they all deserved to be punished. But then also there were particular people, many still alive, who had worked all their lives to deny climate change, to keep burning carbon, to keep wrecking biomes, to keep driving other species extinct. That evil work had been their lives’ project, and while pursuing that project they had prospered and lived in luxury. They wrecked the world happily, thinking they were supermen, laughing at the weak, crushing them underfoot.

Andrew Montford is one of these people. Otherwise, why on earth would he be peddling such a narrative? Read pointed out that he was given a platform by GB News, who have received funding from a firm based in a foreign tax haven and a hedge fund billionaire.

Montford’s narrative is a driver on inaction on climate. He lives a life of comparative luxury and is happy pushing a narrative that would see the world wrecked. The inaction which Montford proposes will be fatal.

Later in the interview he even begins to deny rising temperatures in the UK. Why title an organisation ‘The Global Warming Policy Foundation’ when you deny global warming itself?

He is pretending to care for the poor, like clever billionaires do, by suggesting they shouldn’t pay for the climate crisis. He is purely pushing for people like himself not to pay. He is pitting the poor against measures that urgently need to be taken.

The story gets darker; whilst he denies claims not to be funded by ‘energy companies’, his GWPF sits on Tufton Street. ‘Policy Exchange’  which are part of the same nexus and sit in the same offices were asked by Open Democracy to reveal who funded a report that called Extinction Rebellion ‘extremists’ and Policy Exchange failed to reveal who funded that research. So who is funding these think tanks and what are their motives?

My prediction, is that the next thing that will happen is that the billionaire press will start pushing this narrative in the print press. Whatever we all purport to know and understand, people (like my parents) still buy these papers and believe what they read in them. This narrative will scare the working poor into rallying against climate change measures as it uses scare tactics to tell readers how much this climate crisis will cost them. One thing is for sure, we need to be bold and challenge this narrative, as Read does so well in this debate. We must challenge this assumption with ferocity, because we need the masses of the working class on our side, on the right side of history. We need them with us as Greens and as the wider climate movement, so that they can be truly protected from the harsh and cruel realities of the climate crisis, which will hit them the hardest.

We can no longer allow the people that have made this their lives’ work, to continue to divide us and continue to wreck our planet. There is one truth hidden darkly in the lies and distortions peddled by GB News presenters and the GWPF and their friends on Tufton Street: that all of us, but especially the poor, will pay for it if climate breakdown drags our society down. For that very reason, we must ensure that the rich pay the lion’s share of the costs of forestalling that breakdown.