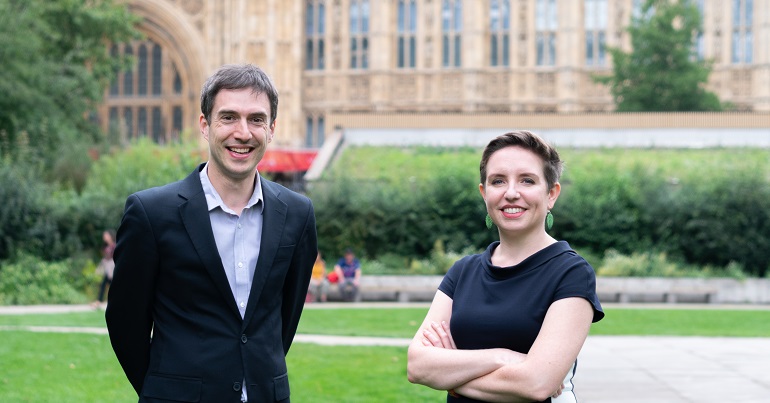 The polls have confirmed it once again: the Green Party is on track to become the third party of England and Wales, overtaking the Liberal Democrats. As candidates for the Green Party’s next co-leaders, we have a long-term vision for how to capitalise on the political space that is opening up for the Greens. But we must act now to seize this opportunity. Here, we set out our plan for our first 100 days in office, centred around our priorities of winning elections, communicating the Green ideas that can transform society, and building an inclusive and well-functioning party that can deliver on those objectives.

Our top priority as co-leaders is to get more Greens elected. We aim to build on our recent surge at the local level to double our councillors to 900 by 2025 – but the real breakthrough will come with more seats in Parliament. We are ready to bring our experience to lead the party to that breakthrough. We have a track record of winning elections: Carla is part of the largest group of Green councillors in the country and at the last General Election achieved our best ever result outside of Brighton, while Adrian co-wrote the Target to Win manual and – as Deputy Leader – was part of the team that first got Caroline Lucas elected in 2010. From day one as co-leaders, we would work closely with the Green Party’s new general election constituencies manager to develop our plan to win more Green MPs. Within the first 100 days we would support the recruitment and induction of constituency campaign managers, and build an engaged, skilled and excited base of volunteers who can be the backbone of the campaign – starting in Bristol West, where we have our best shot at getting that crucial next MP.

And it’s not just about another Green MP, as important and momentous as that breakthrough will be. We have to lay the ground for our next tranche of seats, building a pipeline of seats where we are delivering strong constituency-wide campaigns. And we must prioritise winning seats in the Senedd with long-term support for our campaigns in Wales. With ever-growing public concern about the climate and ecological emergency, we can bring about a Green wave that dwarfs past Green surges. And we need to be ready to capitalise on it with a professional party structure and clear long-term electoral strategy that are central to our platform and our track record. As Caroline Lucas said in endorsing us, “Carla and Adrian would give us the best possible chance of winning our second seat in Parliament, as well as embedding electoral experience and success throughout the Party”.

Yet we know we cannot wait until the next elections to push for greater action on the climate emergency, or on the sickening social inequality that is the result of our current political system. In just seven weeks’ time, the UK will hold the crucial United Nations climate talks (COP26) in Glasgow. This will be a massive opportunity for the Green Party to shape the agenda and call for a Green New Deal. If elected, we will immediately work with the party’s COP26 working group and communications team to produce a robust COP26 communications strategy. We will call out the gulf between the government’s climate promises and their action, and demonstrate that the Green Party is the only party with the courage to oppose carbon-intensive infrastructure such as new roads and airport expansion. And we will ensure that the Green Party’s radical policies are heard, showing that there is an alternative to business as usual. We are consummate media performers, and we know that by presenting Green ideas in a credible, constructive and inspiring way we can rally activists, encourage new members to join the party, and convince audiences that voting Green means real change.

Of course, none of this will be possible without a united party that is professionally run and that can unite behind common goals. We cannot, and must not, ignore the fact that the ‘culture wars’ in society are also present within the Green Party, and that this has caused distress to many of our members and has caused some to leave. We want all levels of the party to be welcoming and inclusive. We have already set out an ambitious plan to champion diversity within our party, to stand up for the rights of all marginalised groups in society and to address all forms of discrimination. As co-leaders, we plan to support the Green Party’s liberation and policy groups to facilitate workshops and training which will help our members understand one another, understand party policy and foster a shared mission. Providing safe spaces for people to engage at a human level and understand each other’s lived experience can be very powerful, and Jewish Greens have already modelled how this can work with their antisemitism ‘roadshow’ earlier this year. The workshops will be a first step in tackling party divisions, and we will take a proactive stance in supporting them, with an aim of getting the first workshops running within our first 100 days as co-leaders.

At the same time, we will initiate a long-overdue external review of the party’s disciplinary procedure to ensure it is fair, effective and consistent. Recently, it has become more clear than ever that a reform of the disciplinary process is needed, and has been requested by the disciplinary committee itself. This should be part of a wider process of ensuring that the party’s governance structures are fit for purpose – it has been heartening to see the Green Party grow exponentially in recent years, but the party’s governance structures need reform to be effective and accountable in relation to the size and ambition of the party today. Adrian’s experience and track record of professionalising the party, and his work as CEO of two charities that are similar in size to the Green Party, puts us in the best place to lead this reform of party structures so that the Greens can be an effective, well-functioning electoral force.

Finally, we are ambitious for our party’s growth, and to that end we will immediately begin supporting the party’s fundraising team to review our fundraising strategy and build a programme to engage donors. As CEO of two national environmental charities, Adrian has a wealth of experience in this area to help move forward an effective fundraising strategy and oversee the efficient targeting of the party’s resources. Carla also brings experience running crowdfunding campaigns for the 2015 and 2019 Bristol West General Election campaigns, and representing the Green Party to major donors locally and bi-nationally.

Our plan for our first 100 days is grounded in what we know the Green Party needs, it is deliverable, and it will set the foundations for exponential growth in Greens’ electoral success. Together, we can begin this work of getting Greens into power and transforming society. There is no time to lose.