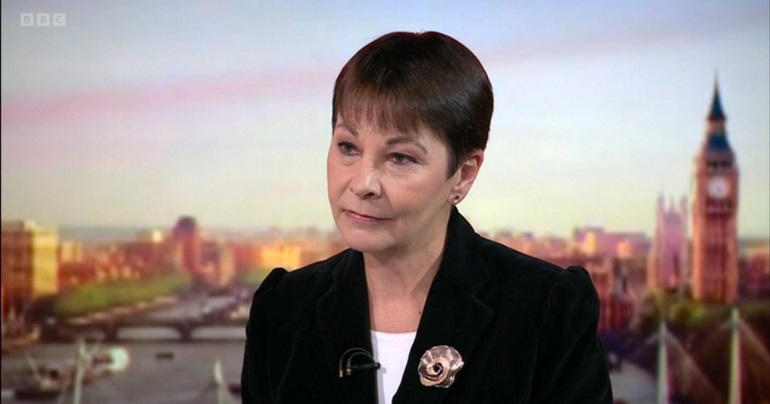 Green Party MP Caroline Lucas has slammed the Tory government and accused them of being “held hostage” by right wing backbench MPs on wind power. She made the comments on the BBC’s Sunday Morning show following the publication of the government’s Energy Security Strategy earlier this week.

In an interview with Sophie Raworth, Lucas was scathing about the government’s strategy. She branded the strategy’s focus on nuclear energy a “distraction from what this energy strategy should have been about, which is to have put energy efficiency and energy saving right at its heart,” and said that nuclear is “simply not a solution that can be fast enough to get us out of the energy crisis that we face right now.”

Instead of expanding nuclear, Lucas called for “a massive expansion – for example – of onshore wind, which was completely lacking in the government’s strategy this week. That’s quite extraordinary, given that it’s the cheapest form of energy, that it has massive popularity in the country.”

She continued by accusing the government of being “held hostage” by backbench MPs on onshore wind. Lucas said, “basically we’ve got a government held hostage by a handful of its backbenchers who don’t think wind farms are sightly. Well, that is not the way we should be designing our energy policy in this country.”

Earlier this week, the Green Party’s co-leader Adrian Ramsay described the strategy as “completely bizarre” because “energy efficiency seems to be entirely missing” from it.

Similar comments were made by Lucas on Sunday Morning, as she called for massive investment in home insulation. Lucas called for a “Council led house by house home insulation programme that could really have stopped people’s energy bills rocketing because so much energy is going out through the walls, out through the roof.” She pointed to Lewes District Council – where the Greens are in joint administration – as an example of how this can be delivered. Lucas said, “They’ve come together with five other councils, they’ve pooled their existing council funding for this – £1 billion – that means they can now roll out free insulation for 40,000 council homes”.

The government’s Energy Security Strategy’s headlines include commitments to delivering the equivalent of one new nuclear reactor per year, providing new licenses for oil and gas extraction in the North Sea and reducing the approval times for offshore wind farms.