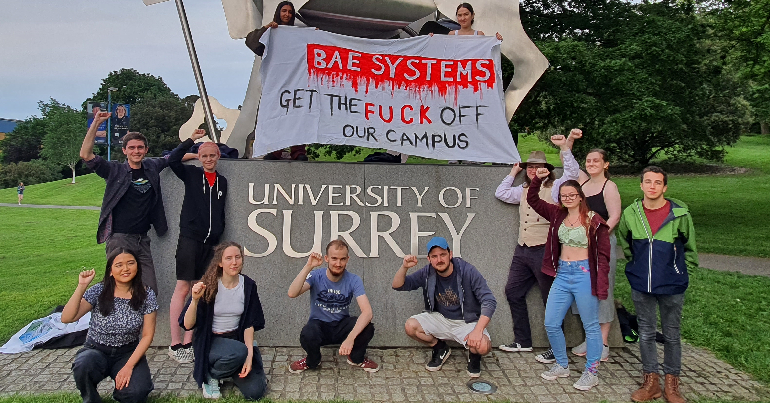 University of Surrey Students’ Union has voted to boycott all fossil fuel and arms industry recruitment. This comes off the back of two motions from the Surrey People & Planet campaign group, which proposed two motions calling for the union to refuse to allow these industries to engage in careers activities in the students’ union at its Annual Members’ Meeting.

The motions passed despite opposition from elected student representatives, who urged students to vote against them. As a result of the motions, the students’ union will now refuse to allow fossil fuel or arms industry recruiters access to digital or physical spaces under its control. It also now has a commitment to support the student campaign, which is calling for the University of Surrey Careers Service to implement an Ethical Careers Policy which explicitly excludes fossil fuel and arms companies from recruitment opportunities.

University of Surrey has substantial links with both the fossil fuel and arms industries. In 2013 the university set up a $7 million ‘BP Centre for Petroleum and Surface Chemistry’ looking into heavy oil recovery. The UK head office for arms company BAE Systems is on the University of Surrey Research park in Guildford.

It’s fantastic that Surrey students have backed our campaign and voted for both of our motions to kick fossil fuel and arms companies out of the Surrey careers department. For too long, our university has been acting as a recruitment pipeline keeping these dying industries alive. It’s time it listened to its students and put in place a proper Ethical Careers Policy.

This incredible result is down to the hard work of grassroots student campaigners, who have been diligently organizing support amongst the student body and building a powerful campaign. Winning this victory at Surrey, a university with closely documented links to both the arms and fossil fuel industry, shows that from now on there is no university which is a safe space for fossil fuel or arms industry recruiters. Students are bringing the fight, and they’re winning.

University of Surrey Students’ Union isn’t alone in passing policy opposing campus recruitment from the fossil fuel and arms industries. Similar policies have recently been passed at University of Bristol, Edinburgh, Sussex, and Sheffield Students’ Unions. These have been coordinated by the student campaign network People & Planet, which is running the national Fossil Free Careers campaign.