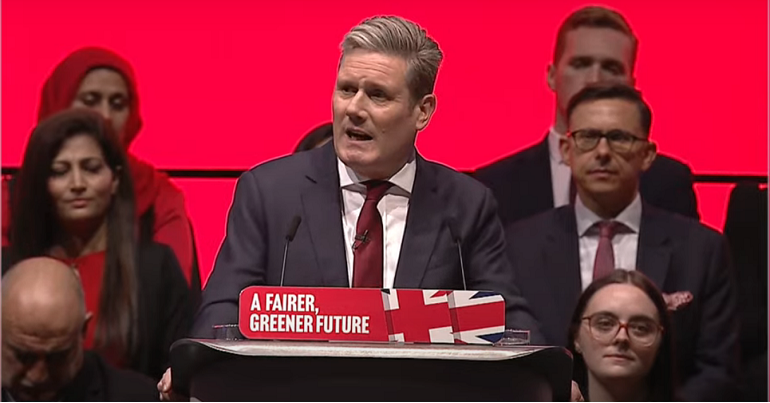 Members of the Labour Party are currently gathering in Liverpool for the party’s annual conference. Today, Keir Starmer gave his headline speech to the conference, setting out his vision for the country and announcing a series of policies the party intends to implement if elected at the next general election.

One of the most eye-catching announcements was the commitment to create a new energy generation company – Great British Energy. In his speech, Starmer confirmed that the party would intend for this company to be publicly owned, saying that this was right for “jobs”, “growth”, and “energy independence from tyrants like Putin”.

The move has been welcomed by anti-privatisation and climate campaigners.

Cat Hobbs, Director of public ownership campaign group We Own It said, “We’re absolutely delighted about this fantastic announcement from Keir Starmer. Great British Energy, in public ownership, will invest in renewable energy, tackle climate crisis and bring down bills. We have incredible potential for wind and water power around our coastline that can be harnessed for everyone’s benefit. The public will celebrate this amazing news. Our polling shows that 66% of us, including 62% of Conservative voters, want energy in public ownership.”

These comments were echoed by Matt Lawrence, director of the Common Wealth think tank. He said, “The solution to the entwined energy and cost of living crisis is to accelerate off imported and expensive fossil fuels. A national energy champion can play a key role in this: building clean energy infrastructure faster and fairer than the alternatives, while creating good green jobs and industries across the UK. Common across Europe, it is time we caught up, and ended the scandal where almost half of wind power is owned by foreign governments, while the British people have almost no stake. Labour’s announcement is an ambitious proposal that corrects that imbalance, meets the scale of the challenge, and grasps the opportunities of the net-zero transition. Public ownership is a powerful tool to deliver clean and affordable power not just for generation, but the entire system.”

Rebecca Newsom, head of politics at Greenpeace UK said, “Establishing a UK-owned energy generator has the potential to give homegrown renewables a big boost. Under a publicly-owned Great British Energy, vital emerging technologies like floating offshore wind and green hydrogen electrolysers could be given the extra support needed as UK supply chains are grown and costs come down.”

While Starmer fought the 2020 Labour leadership election on a platform of bringing “rail, mail, energy and water” into “common ownership”, Labour had in recent months been dismissive of calls for public ownership. As recently as July, shadow chancellor Rachel Reeves ruled out public ownership of water, energy and the railways.

The announcement therefore represents a significant shift in Labour’s position, and is in keeping with a number of other announcements made at the conference. Earlier at the event, shadow transport secretary Louise Haugh said the Labour Party would bring the railways back into public ownership. Deputy leader of the Labour Party Angela Rayner said Labour would oversee the “biggest wave of insourcing in a generation”.

However, some campaigners have called on the Labour Party to go further. We Own It called on the government to commit to creating a publicly owned supply company and ending the privatisation of the grid. Hobbs said, “We’d love to see a public supplier too and the grid should also be working for people not profit – these policies are the norm in other European countries. But this announcement is a huge step in the right direction.”

Similarly, Greenpeace UK called for Labour to commit to providing fossil fuel workers with routes out of the polluting industry. Newsom said, “To be truly effective and deliver on Labour’s commitment to a fair climate transition, a publicly owned energy agency would need to give fossil fuel workers smooth routes into the clean energy sector. Right now we already know that more renewable jobs must go to local workers, with fair contracts and safe working conditions, and there must be proper training and reskilling for workers moving across from the oil and gas industry.”